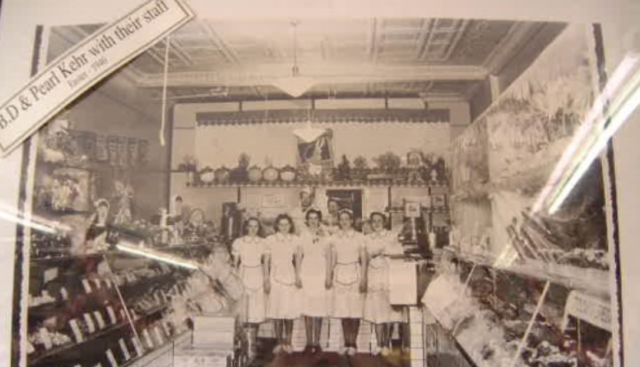 You might have seen Kehr’s Candy shop inside the Public Market, but the factory on 36th and Lisbon is where all the magic happens. In the December issue of Milwaukee Magazine, Ann did a lengthy profile on the business for a sweet holiday piece.

Here’s the story: Pearl and B.D. Kehr met at a ballroom in Milwaukee and later married. In 1930, early in the Great Depression, the young couple decided to open a store to make and sell caramel corn and potato chips. Little capital was necessary. “All we needed was sugar, butter, popcorn, and potatoes,” B.D. Kehr said. Soon, they discovered caramel corn and potato chips alone did not produce enough income, so they began making candy.

During the Great Depression, it was common for unemployed craftsman to sell their skills. The Kehr’s bought recipes from candy makers who stopped in. These men tutored B.D. Kehr on how to cook the candy. Their first product was chocolate fudge. The selection grew from there. The Kehr’s moved to several different buildings in the city before settling in at 3413 W. North Avenue. In 1941 they opened another store on Lisbon Ave. This location has served as the main factory for over 75 years. The Kehr’s used this factory to produce ice cream and candy to supply three additional “Kehr’s Candies” storefronts. When they retired in 1960, their son William (Bill) took over the reigns and closed all but the factory store. Bill spent his whole life working in the family factory. Fun fact: Bill’s other passion was organ music. Bill mixed over a dozen records as Bill “The Candyman” Kehr and he was well known to organ music and polka enthusiasts.

Current owner, Paul Martinka, started as a stock boy in 1983. For 12 years Paul worked under Bill learning to run the factory and learning the skills needed for fine candy making. Now he owns the business and continues the family tradition of hand-dipped candy.

Blue’s Egg is exploring German cuisine and German-inspired brunch creations this holiday season. Through the month of December, look for Blue’s Egg’s German specials and join them for some Gemütlichkeit this holiday season. The restaurant is bringing in Butterkäse and busting out recipes for Sauerbraten, Schnitzel and baked goods. As always, you can also order from the regular menu.

Pizza is back at Miss Molly’s on select Fridays: December 7, January 4, February 1, March 1 and April 5. These are perfectly baked pizzas with the freshest of ingredients. The pizzas change each time, but on December 7 the options include a kettle range Italian sausage, mushroom and onion pizza, a chèvre, caramelized onion, balsamic drizzle and arugula pizza and a plain cheese pizza for the kids.

Every Tuesday from 10 a.m. to 9 p.m., Meat on the Street is doing a Filipino-inspired Taco Tuesday for carnivores, vegetarians and vegans alike. Just look at the menu. These photos of the tacos are the only reason you need to go there. Find the restaurant in the Eleven25 At Pabst food court.

Crossroads Collective food hall on the corner of Farwell and North Avenues is almost here. After some construction setbacks, the soft opening has been moved back to December 14, but you can expect it to open shortly after that. In the micro food hall, we’ll see new East Side locations for Laughing Taco, Scratch Ice Cream, Falafel Guys, Heavens Table BBQ, Frida and the Beerline Cafe. Stay tuned for a sneak peak of the development soon.

Tre Rivali’s pies for a cause

From now until December 24 , Tre Rivali (in the Journeyman-Kimpton hotel) will be selling five-inch pies for $10 each with 50 percent of the proceeds donated to No Kid Hungry’s Chefs Cycle, a fundraising endurance event featuring award-winning chefs and members of the culinary community fighting hunger outside the kitchen. Pie flavors include dark chocolate peppermint cream, salted caramel apple and maple pecan.

The rich history behind Kehr's Candy in Milwaukee

We have a candy crush on Kehr’s Candies. Ann took a factory tour to learn the history and process of how Kehr’s has been doing handmade chocolates in Milwaukee since 1930.