These vegan ‘pork’ rinds aren’t bad at all

These vegan ‘pork’ rinds aren’t bad at all 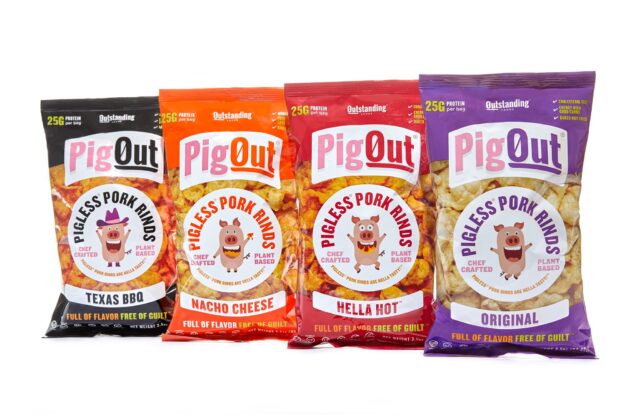 I keep getting this targeted ads in my Facebook feed for a special kind of pork rinds. It’s called Pig Out, and it’s a plant-based chip. I received a variety pack that I ordered in the mail the other day — those Facebook ads worked on me — and the flavors include original, Texas BBQ, nacho cheese and a spicy flavor called Hella Hot. Apparently Snoop Dogg is a fan of them.

The ingredients include rice, pea protein and pea grits. They’re not bad. They certainly have the crunch a regular pork rind, but unfortunately they only have a hint of the porky flavor. The original had a lot less flavor than the Texas BBQ, and wasn’t as salty — making it easier to eat a lot of them. My only complaint was they left a slightly chalky texture behind on my tongue, but that wasn’t a deal breaker. You can just wash that away with a sip of beer.

Last week, we learned that Comet Cafe has closed indefinitely, although there’s a possibility it could reopen. Its parent company also operates a couple of locations of Fuel Cafe, including the one on Center Street in Riverwest, which has also closed indefinitely. (The Fuel Cafe location in Walker’s Point is still in business, but it hasn’t been open since the pandemic closed it in March). It’s heartbreaking: One of my favorite sandwiches in the city was at Fuel, the spicy ham and salami.

Meanwhile, Fauntleroy, the French restaurant from DanDan’s proprietors, has also closed. It’s clear that if you care at all about local businesses, you have to take this pandemic seriously, otherwise these closures will continue.

Crazy Water has closed, but now the location is back with a new concept. The owner decided to convert the space into La Dama Mexican Kitchen. The menu looks interesting. Highlights include stuffed corn masa, grilled octopus, a smoked pork belly and black garlic taco and a vegetarian taco with seared spicy cactus. And don’t forget the torta with smoked pork cheek, bean spread, asado pasado, roasted tomatoes, mango and guaje chutney, arugula and ajillo aioli.

There’s also a burger that sounds unlike any in the city: It’s served on a cemita roll with chimichurri butter, manchego and chapulin aioli.

Here’s a tasty beer: Milwaukee’s Company Brewing is one of over 1,000 breweries from around the world to take part in the Black is Beautiful Beer initiative. The initiative was started by a Texas Black-owned brewery called Weathered Souls. They invited any brewery to participate by brewing their recipe for an imperial stout. The participating breweries have to donate 100% of the beer’s proceeds to a local organization that fights for racial justice or supports equality and inclusion.

Company Brewing will start selling the beer on July 16 and 100% of the proceeds will be donated to BLOC (Black Leaders Organizing For Communities).

We also discuss a cute story about a face mask with a hole in it for a straw, making it easier to drink craft cocktails.