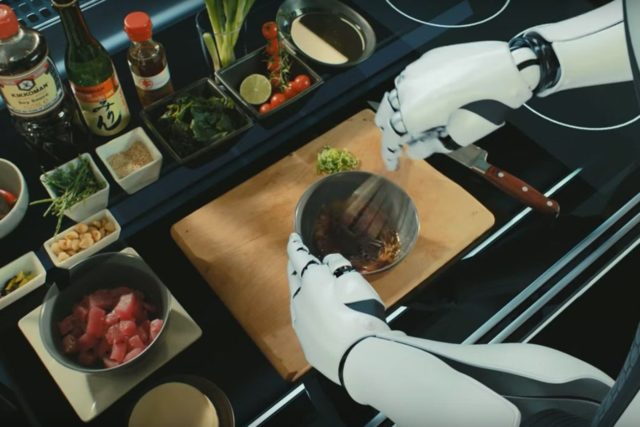 On this week’s show, we talked about new restaurant in the third ward called the Sweet Diner. We also talked about cooking with artificial intelligence, and Autumn Brunch at Hotel Madrid, Irie Zulu 2-year anniversary, Korean cooking class, and more.

There is a new app in the works called Bridge Kitchen that aims to make you a better cook.  Bridge Kitchen uses artificial intelligence to become your personal sous chef.

Give it a recipe, and it doesn’t just read it to you — it understands it. It walks you through the cooking process, making even unfamiliar dishes a breeze to whip up. And you can ask it questions about what you’re doing — like exactly how much olive oil that last step called for — all without lifting a finger.

The app will be able to help you create a meal based on what you have in your pantry and refrigerator. In addition to adding your own recipes Bridge Kitchen can tap into nearly 200,000 recipes from the New York Times and Epicurious.

There is no information about the release date of Kitchen Bridge, but you can sign up for the beta when it is released on their website. If you can’t wait to see how artificial intelligence can help you out in the kitchen check out IBM’s Chef Watson. Chef Watson develops recipes based on your input.

Chef Watson is a cognitive computing application. It learns from human expertise and extends what people can do on their own.

Chef Watson read 10,000 recipes from the chefs at Bon Appétit to understand how ingredients are used in different dishes and styles and, for example, what makes a soup different from a burrito.

Then, it added an understanding of food chemistry and the psychology of people’s taste likes and dislikes. With as little as one user-selected ingredient, Chef Watson analyzes quintillions of possibilities and evaluates combinations for their novelty and synergy.

In contrast to a search engine that sifts through existing data to serve up a list of already published recipes, Chef Watson is not programmed to come up with a defined answer to a defined question. Instead, it understands, learns, and considers, and then presents ideas for cooks to entertain in their creative process.

Saehee Chang, a local cooking instructor and founder of Kosari Kimchi, will provide an interactive cooking demonstration of traditional and delicious Korean dishes for any occasion. We will make Jap Chae- Festive Sweet Potato Noodles with Vegetables, and Traditional Green Onion Pancakes. The class takes place on Nov. 18 at the Urban Ecology Center’s Washington Park location from 1 pm to 3 pm.

Irie Zulu will celebrate its 2-year anniversary with a “Culinary Getaway Week” from Nov. 14 -19.  For five days, Irie Zulu will feature five staple African and Caribbean cuisines. A portion of the sales will go to two charities. More detail can be found on their Facebook event page.