This Bites’ favorite cookbooks of 2019

This Bites’ favorite cookbooks of 2019 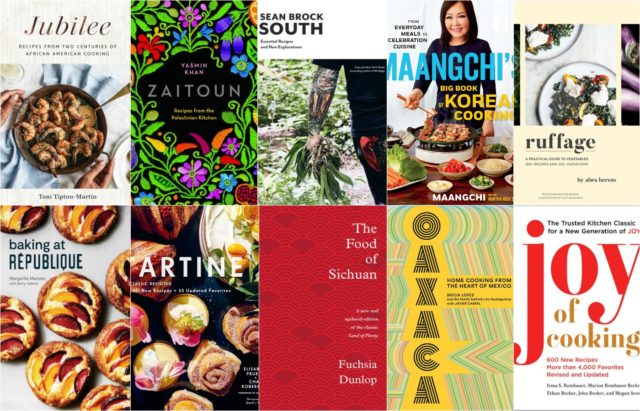 This week on Milwaukee’s longest-running food podcast, we’re talking about some of the best cookbooks of 2019, as well as a really cool new dinner series at Blue’s Egg, a “Gremlins” takeover at Hotel Madrid and an unusual oysters and beer event Mars Cheese Castle. Stream the episode below.

Ann kicks off her cookbook recommendations with “Baking at République: Masterful Techniques and Recipes,” from Los Angeles baker Margarita Manzke, “who teaches the key doughs, batters, recipes, and clever ways for creating wow-factor and bakery-quality results at home.” It’s loaded with photos and also includes some Filipino sweet recipes, such as a sweet coconut soup.

I kick off my recommendations with Toni Tipton-Martin’s “Jubilee: Recipes from Two Centuries of African American Cooking: A Cookbook,” which looks at 200 years of African American cuisine, including some classics like Sweet Potato Biscuits, Seafood Gumbo, Buttermilk Fried Chicken and Pecan Pie with Bourbon as well as Spoon Bread. Other picks include a book that will make you rethink the way you look at vegetables, and a book that puts a fresh spin on southern cuisine.

Blue’s Egg is of course known for breakfast and brunch, but it has announced a new Friday dinner series, exclusively at its Shorewood location on Oakland Avenue. It feature heritage ingredients. The first one is on Jan. 10. Ann shares the tantalizing menu.

Hotel Madrid is honoring the holiday classic “Gremlins” with a pop-up. They’ve come up with an elaborate Gizmo-inspired cocktail. The whole event makes us wonder whether Gizmo was the inspiration for Baby Yoda. The pop-up will run through Christmas Eve.

Hear us discuss all that and more — including the Mars Cheese Castle’s 7th Annual Bourbon Barrel & Oyster Brunch — on this week’s episode.