We may be stuck at home, but we’re still eating well

We may be stuck at home, but we’re still eating well 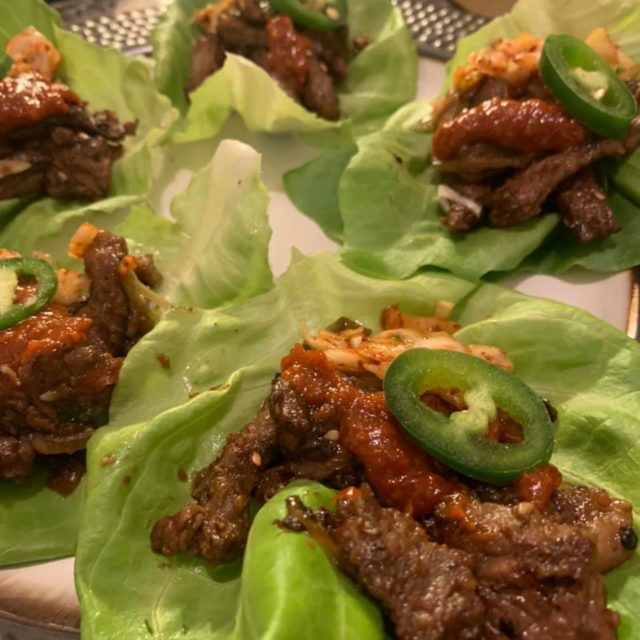 On this week’s episode, we touch base from our respective abodes and discuss what we’ve been eating while we’ve been adjusting to the new normal. Ann updates us on her latest baking successes, which include poppy seed bread, a super sweet bread that she says is almost like a cake (“It’s like a desert but you can have it for breakfast,” she says). She also made some salted chocolate chip cookies to which she added a little buckwheat flour, which makes for a denser cookie with an interesting favor.

Cooking wise, she’s been doing a lot of sautes, and trying to eat as many vegetables as she can. She also discusses salad dressings and marinades.

Meanwhile, I made a Korean meal with grass-fed rib eye in a special Korean marinade, cooked in a cast-iron skillet. I also made some emergency kimchi with the one (one!) head of cabbage I was able to find at the grocery store. I also made a daiquiri with dark rum, which I call the Moody Daiquiri.

Lakefront Brewery’s fish fry is back

Here’s some welcome news: Lakefront Brewery’s Friday fish fry is back. Of course you won’t be able to eat it at the brewery, but Lakefront will be offering the grab-n-go food and beer from 3 p.m. to 8 p.m. with the last order being accepted at 7:30. The menu includes fried or baked cod, shrimp, beer and some very tempting fried cheese curds, which Ann and I are both seriously missing right now.

Then Ann updates us on five area bakeries that are offering baking kits, including Aggie’s Bakery, which has a build-your-own cupcake kit. You can also send somebody a “Goodie Gram,” which could be a six-pack of cupcakes or a 12-pack of donuts. “Right now we need more joy in our lives, and there’s something about deserts that makes people happier,” Ann says.

Hear us discuss all that and more, including some farms that are offering home delivery and our cookbooks of the week, on this week’s episode below.