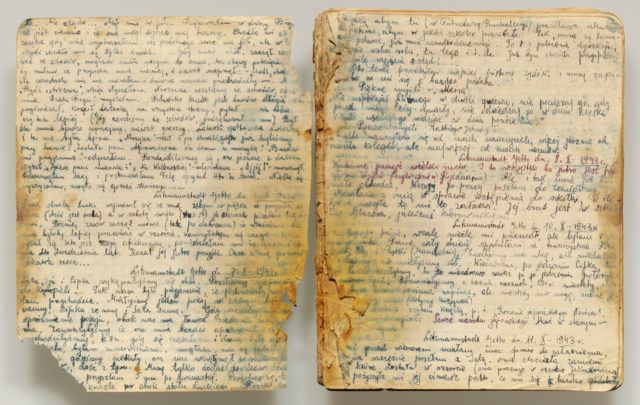 This year marks an important milestone in history: 2020 is the 75th anniversary of the liberation of Auschwitz, signaling the end of WWII.

Now in Milwaukee, Jewish Museum Milwaukee is inviting the public to connect that moment in history to a real person — and her suffering — with the exhibit, “The Girl in the Diary.” It showcases a 112-page diary kept by an imprisoned teenage girl and uncovered from the rubble at Auschwitz.

In the diary, the 14-year-old girl young girl, Rywka Lipszyc, documents her tragic separation from her family, the slave labor she was subjected to and the emotional weight she carried as she stepped in to parent her young siblings.

“The diary is really the confidant, the friend, the system of support, the means of catharsis,” Dubin says.

The centerpiece of the exhibit is a large, interactive light table. You can see Rywka’s original writings digitized and translated into English, documenting her life inside the Lodz Ghetto between October 1943 and April 1944.

Then, alongside, original artifacts uncovered from the site, on loan to the museum.

Dubin points out one artifact that is particularly tough to take. Encased in a glass compartment is a pair of hand-stitched baby shoes, made by children slave-laborers, in the ghetto.

“To think about the fact that there was a individual with those tiny feet that needed those shoes, and that there were children being forced to make those, it’s a very difficult thing to understand and to wrap your head around,” she said.

The human cost, the voices silenced — it’s a difficult reality to face. I asked Dubin about that, why it’s so important to look at directly at these atrocities and not forget them.

“Facing difficult histories is challenging, and it’s something that we as a museum, and I think other museums around the country have realized. As difficult as it may be, it’s necessary.”

Dubin says, if there is a positive takeaway from the exhibit, it’s an ultimate lesson in resilience.

“There’s something very inspiring about Rywka’s words, about her, even in her moments of doubt. . .she remained hopeful. She didn’t just want to survive, she wanted to thrive. And if Rywka in the most unimaginable circumstances can have those thoughts, that’s a really inspiring message to be able to walk away with.”

“The Girl in the Diary” is on view at Jewish Museum Milwaukee, running now through May 17.