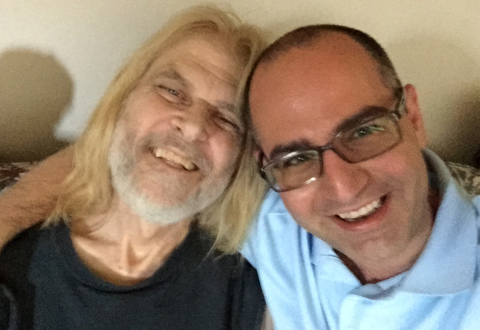 We just don't talk about this stuff in our culture, so it feels unnatural to be in the room with a dying individual.

Ever since they met in 2012, Dino Mantzavrakos and his neighbor Mark were always, well, and interesting pair.

Dino explains, “Mark was six-foot-nine, a truck driver for over 35 years. He was the kind of guy that would walk into a party and everyone would look at him because he was almost scary looking, he was so big!”

But despite their difference, the tall heavy-rocker, truck-driving Mark and his bubbly, outgoing neighbor Dino always had a mutual understanding of each other, and when word traveled to Dino in 2015 that his neighbor, Mark, was diagnosed with Stage IV cancer, Dino saw he needed someone by his side.

“I just knew. Something just clicked that I would just be there.”

And for more then 400 hours between June and Mark’s passing in November, that’s what Dino did. He visited his neighbor, cleaned his house, paid his bills, did his laundry and was just a friend to talk to during a difficult time.

After a five month battle with cancer, Mark passed away in November 2015. And while he knew Mark was ready, Dino still misses his friend; Playing back old voicemails from Mark and rereading old text messages, Mark reminisces,

And, to his surprise, two months later Dino’s volunteer work, the hours he spent with Mark, they were noticed, by, well, President Obama.

Dino was honored on January 19th with the Presidential Volunteer Service Award at the Milwaukee VA and was given a letter from the President along with the award recognizing and encouraging Americans who live a life of service.

And while Dino appreciates the award, he’s just glad that Mark’s story is now being shared and hopes it will inspire others.

“We just don’t talk about this stuff in our culture, so it feels unnatural to be in the room with a dying individual.”

More on the story of Mark and Dino, can be found here and through the Milwaukee VA: Gary.Kunich@va.gov