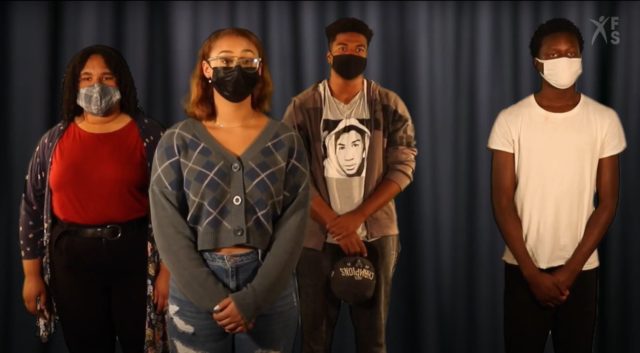 We hear all the time that representation matters, but does it really if there aren’t a variety of voices in the writers’ room? Can representation matter if a story is told from a perspective that isn’t the writer’s own? First Stage launched its second short play series this month, Amplify, which began in the spring of 2021 to showcase plays created by BIPOC, centering on a young person’s point of view. The initiative aims to connect the theater community and tell stories about communities that might not be properly represented.

“It’s giving directors, actors and people of color an opportunity to share their voice, share their talents and to demonstrate their ability,” said Samantha D. Montgomery, artistic inclusion and community engagement director for First Stage.

The series kicks off with “How to Actually Graduate in a Virtual World,” a play by Nikkole Salter, directed by Samantha D. Montgomery and in collaboration with Milwaukee Black Theater Festival Youth Night with music by WebsterX.

“This play is about young people who are feeling like they are invincible and left out,” said Montgomery. “Not only because of their life experiences but because during the pandemic, they are not going to be able to celebrate their graduation. It’s also about being a young person living in Milwaukee.”

The play centers a high schooler’s perspective on the pandemic. Each character resembles a response to the pandemic. Jordan, played by Jonae Thomas, was more concerned with her grandmother’s health and was frustrated than her classmates when their focus was on missing their in-person graduation. Shannon, played by Abby Wallace, resembled optimism. Kenya, played by Christian Hughes, felt like he was left behind and had an overall negative reaction. Raynell, played by Nahjee Robinson, had a hustle mentality, using his free time to focus on passion projects like his music. he main character TT, played Maya O’Day Biddle, mentioned that although illogical, she felt as if she was being blamed for something in regard to the pandemic, that missing her graduation was tied to her lack of hard work, instead of a global health crisis.  Montgomery said that was a sentiment shared among students.

“You can feel like being left out, not being noticed or people don’t realize how important those milestones are to you,” said Montgomery. “A lot of young people are trying to find their journey and in that process, they have various struggles.”

Another character in the framework is Milwaukee. Although the play was written by Salter, who lives in New York City, however, Milwaukee was properly represented in the script and dialogue. In one scene where a Zoom call screen freezes, Kenya said, “This ain’t Menomonee Falls,” as a call out to underfunded neighborhoods.

“It’s about certain disadvantages that are within communities,” said Montgomery. “Everybody doesn’t have access to the same resources. So when he said, ‘This ain’t Menomonee Falls’ it means that they might have newer computers, but that’s also a stereotype in some sense.”

The next play in the Amplify series is “Step Kids,” a one-act musical about high school kids finding common ground during a dance competition audition. For more information on the BIPOC series, check out the First Stage website.