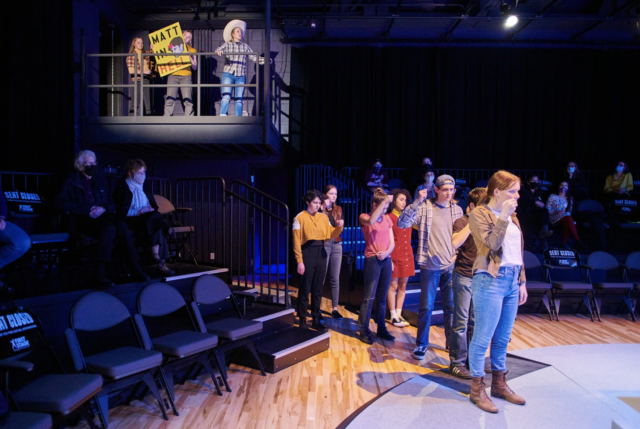 In 1998, Matthew Shepard was brutally beaten and left to die in Laramie, Wyo. He was killed because of his sexual orientation. The response was earth-shattering and led members of the Tectonic Theater Project to conduct interviews in the aftermath, turning the interviews into documentary-style theater. “The Laramie Project” is a 2000 play by Moisés Kaufman and members of the Tectonic Theater Project about the reaction to Shepard’s 1998 murder.

“The more things change the more they stay the same,” said Daniels. “Our kids are having trouble because it is okay to accept their peers as who they are but they see the world around them still having trouble making those accepting gestures.”

An interesting aspect about this play is that everyone had a character: the folks in Laramie, the students conducting interviews and even Matthew’s parents. Everyone had a role except for Matthew. Daniels said that it was a purposeful choice.

“What it does is that it makes Matthew into a sort of every man,” said Daniels. “Every member of the audience gets to insert the image of Matthew Shepard into their mind. They can personalize him however they want to and abstracting him as a character makes it more personal for every audience member.”

Another intriguing element of the play was the sound design. Alongside your standard background music, there was a repeated intake of breath that the actors would perform with a sound effect. Daniels said that although he can’t speak on behalf of the playwright, everything in theater is intentional.

“So much happens in a single breath,” said Daniels. “Matthew Shepherd, all he had on the fence was his breath until he didn’t.”

With heavy topics such as this one, sometimes the best method of expression can be theater. A place where you’re stuck in a room with no escape, surrounded by people experiencing the same thing and truly facing the truth.