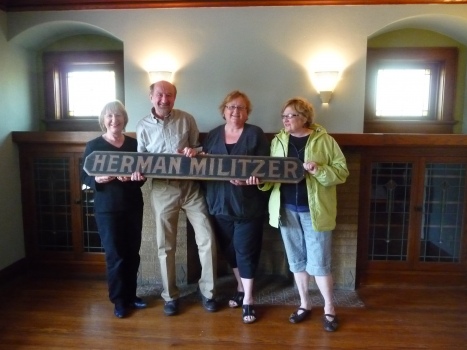 And because the storytelling gods always seems to smile on the Neighborhood Project (knock on wood), with the help of Pat Mueller, I managed to track down the Thaneys (of course, some of them are no longer Thaneys due to marriage). The Thaneys are grandchildren of Herman Militzer, a German immigrant who had converted the saloon on 43rd and Vliet into a grocery store back in prohibition times. So, what would a kindly grandfather do with produce that sat in the store a little too long? Why, give it to his rascally grandkids to feed wild animals, of course:

In pre-interviewing, Tom mentioned “feeding heads of cabbage to the hippos,” which unfortunately did not come out during the actual interview. However, that omission got my imagination churning on the endless of animal-produce combinations that must have occurred when the zoo was in Washington Park: badgers and beets, onions and ostriches, kohlrabi and koalas, tortoises and tomatillos…

The interview actually took place above the old Militzer grocery store (where Eat Cake! is located today), in an apartment the Thaneys’ grandparents once called home. Naturally, this sparked an avalanche of memories of their grandparents and the neighborhood:

I feel incredibly privileged to have been able to witness and record such a charming, impromptu family reunion — what a wonderful way to remember a forgotten zoo.

Interested in Martin Drive? You can learn more about them at their neighborhood website, and of course, you can always go and check it out for yourself!

In gathering history about Martin Drive, an interesting fact kept popping back up over and over again — the Milwaukee County Zoo once occupied the space where Washington Park now stands, across the street from the business district on Vliet Street. And apparently, the zoo had incredibly lax security, remaining open 24 hours a day for anybody in the mood for some late night fauna-inspection. So from my side of things, the challenge becomes how to paint a picture of that fact rather than merely stating it.