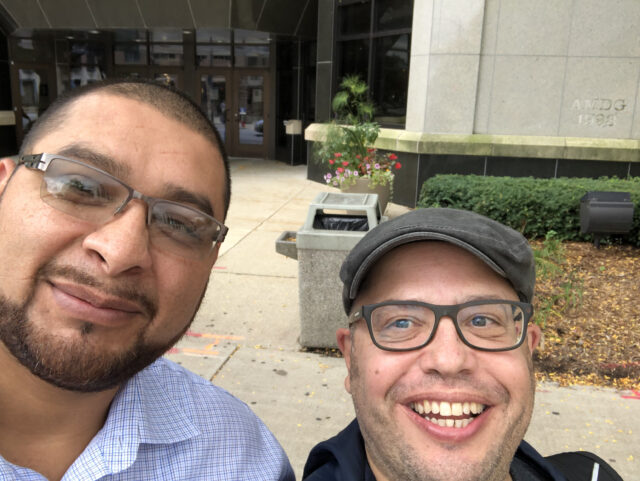 “What if we all had to walk around with a sign saying what we have done the worst thing? How many people would not be making $15 an hour,” asks Ruben Gaona, co-founder of The Way Out. “How many leaders would we have? We have leaders that do have criminal backgrounds but being that the stigma is so high, they won’t even speak about it.”

Ruben runs The Way Out along with Eli Rivera. They’ve both been in prison and upon exiting the system have decided to create a tech app that helps place formerly incarcerated people in living wage jobs.

While living in a halfway house upon prison release, Eli saw how many people had trouble finding work which could affect their living arrangement at the halfway house.

Ruben, upon leaving prison in 2017, knew he wanted to be a case manager for others who have been in prison but he says he met resistance.

“Some family members, friends, were like, ‘You’re probably not gonna be able to be a case manager,’” Ruben says. “‘Your life and career are pretty much over due to the fact that you’re a felon.’”

Two weeks after his release from prison, Ruben got offered to be a case manager for a company, though he had to apply through a staffing company.

“The recruiter found me interesting, liked my resume love but I had an employment gap of seven years,” Ruben says.

He explained that he was in prison during the time and he saw that he quickly went from a candidate to being told that the position had a wait list. The recruiter told him he could consider a janitor job for $8.50 an hour instead.

“I already knew that the case management position paid little or $19 to $20,” says Ruben. “You’re asking me to take a three fourths cut on a whole different job, knowing that my kids out here are making $9.50 at Taco Bell and you want me to support a family of five at $8.50? It’s impossible.”

With experiences like these, Ruben and Eli wanted to change that reality for those re-entering.

This is where the app comes in. People who have served jail time can fill out a form on The Way Out’s website. However, on the employer side, the employer doesn’t see name, address, history of incarceration and things that can allow for bias. The Way Out Platform allows an employer to see more context to the person who is applying, like their personality traits, accomplishments and other merits when the stigma of a record is removed.

“To Ruben’s point, we take all of the positive things someone has done and adjust for levels of conviction and figure out what is the true potential of the human being regardless of all of this,” says Eli. “We won’t have that until we have a ton of historical data.”

Hiring someone with a criminal record might sound risky but Ruben points out that there are organizations that provide safety nets for employers like bonding certificates that can help mitigate risk of damage, if it’s there.

“It’s not until we’re having these tough conversations, we’re bringing to light the ugliness of these situations that there’s opportunity,” says Eli.

And as Ruben says, to reduce recidivism the community at large has to treat it as one team one fight to help people get reintegrated.