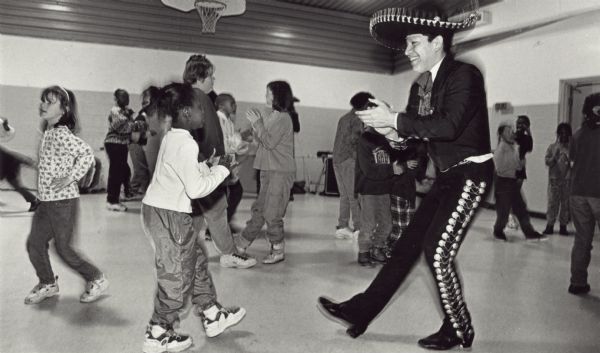 Hispanic Heritage Month is celebrated from Sept. 15 to Oct. 15. The celebration starts mid-month to mark the independence of five Hispanic countries: Costa Rica, El Salvador, Guatemala, Honduras and Nicaragua. This month celebrates Latinx Americans, their culture and their history.

Latinos are the second-largest and fastest-growing population in Wisconsin. I recently sat down with Dr. Sergio Gonzalez, a history and languages assistant professor at Marquette, to learn about Milwaukee’s Latinx communities.

“You can’t talk about what’s happening today without talking about a 100-year long history of migration from Latin America,” said Gonzalez. “The first large groups of Latinx Mexican descent people really began arriving in the city in the 1920s. They come here for the same reason a lot of immigrants come to the United States. They came looking for better opportunities for themselves and for their families.”

It was simple. The majority of the Latinx community settled in Walker’s Point because there was work there with booming industries, factories, and tanneries. Even today the South Side of Milwaukee still carries Latinx cultural significance.

Gonzalez wrote a book, “Mexicans in Wisconsin,” that traces the journey of Mexican immigrants making Wisconsin their home. Gonzalez said one of the reasons he wrote it was because nobody else was reporting these stories.

“I grew up in the city and we all would go to Old World Wisconsin,” said Gonzalez. “We would go to the Milwaukee Public Museum and the old streets of Milwaukee. I would look around and there’s all this immigrant history; I think to myself, ‘Where’s my family’s history?’ My family is originally from Mexico; I don’t see myself represented here. I think a major reason for this, it’s a political reason. There’s a reason that people don’t consider these populations that are still coming to this country today as being part of this larger narrative. They see them as newcomers.”

Gonzalez said many Latinx people who have come to Milwaukee still have trouble being identified as a Wisconsinite regardless of whether they made a home here.

“It’s a consistent problem,” he said. “They’ve been wanted for their labor, for the work that they can provide but their social standing in the state has always been very suspect. We can see in the last year with the pandemic; the question of who is essential and essential workers? Oftentimes those people who have fallen under the gun when it comes to working in really difficult conditions and not having any protections have been Latinx workers, often undocumented but not just undocumented. These are kind of persistent questions that we have today and it’s all very much connected to who we consider an immigrant, who we consider as part of our past and ultimately as part of our future.”

Gonzalez said it perfectly. It’s essential to continue asking those questions and hopefully one day we won’t need to.