Love it or loathe it, Milwaukee’s short-lived ‘whaling wall’ definitely made a splash

Love it or loathe it, Milwaukee’s short-lived ‘whaling wall’ definitely made a splash 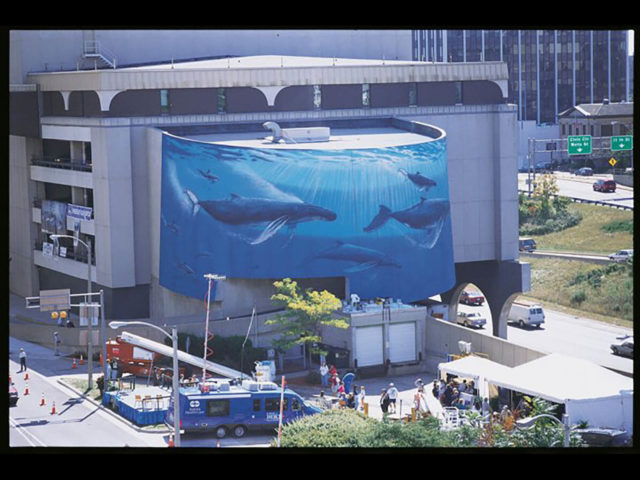 For just shy of a decade, a particularly infamous Milwaukee mural caught the city’s collective attention, and for some, its ire.

Artist Robert Wyland’s “Commuter Whale” mural was installed on the bare, rounded concrete facade of the former courthouse annex, an addition to the courthouse that jutted out over I-43 Northbound above traffic, in 1997.

The mural depicted a peaceful underwater scene of several seemingly life-size whales and dolphins swimming, lit from above with sunlight. It was demolished in 2006 when the entire annex was demolished to expand the freeway.

It sounds inoffensive enough, but residents and politicians at the time were quick to ask: “What do whales have to do with Milwaukee?” And why put it over the interstate, instead of, say, the zoo or the lakefront?

All good questions, and therein lies the controversy; many in Milwaukee felt it was out of place for a freshwater city. On this week’s episode we talk about the public debate that ensued prior to the mural’s installation, and we go into the archives to learn where city leaders landed on the controversial “whaling wall.”

We also discuss the overarching environmental meaning of the artwork and how Milwaukee was connected. Plus, we share our own opinions on the mural on this week’s podcast below.

Listen to the episode, and visit OnMilwaukee for more photos and to dig even deeper into Bobby Tanzilo’s research.