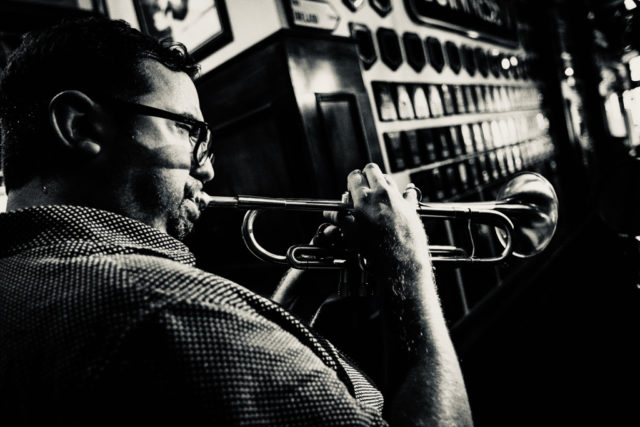 Local musician Jamie Breiwick wears many hats. Breiwick is a trumpet player, bandleader, composer, Grammy-nominated educator, graphic designer, promoter, father and archivist. The Milwaukee Jazz Archive project that Breiwick runs was a huge inspiration and resource for the “Milwaukee Jazz” book, which I put together and published this summer. Naturally, I tapped Breiwick to write the book’s introduction.

When 88Nine Radio Milwaukee looked to celebrate its roots as “Jazz 89” with this week’s “Vinyl Comes Alive” events, the station tapped Breiwick to curate the program. I spoke with Breiwick about his approach to the event and his new record, “Awake/The Music of Don Cherry.”

What was your process like in putting together the upcoming “Vinyl Comes Alive” events at 88Nine Radio Milwaukee?

It was important to get a diverse group of musicians and personalities representing different segments of the Milwaukee jazz scene, while also representing and bringing light to our important history. I think last year’s event sold out on the first day, so we are adding a second night.

It will be two completely different programs, so people will be able to attend both nights if they wish.

What did you most enjoy about the initial “Vinyl Comes Alive” event?

In general, last year’s event was a great night with an overwhelming positive vibration. Being a student of history, it was great to see the old vinyl collection get dusted off and put to use. I just caught the tail end of the old WYMS and remember hearing Howard Austin, live on the air. We will be bringing Howard in as a guest MC at this event, so of course that will be wonderful. I’m very thankful to be a part of this fantastic event and I hope there is more to come between the Milwaukee Jazz community and 88Nine.

Let’s talk about your new record, “Awake/The Music of Don Cherry.” What makes Cherry’s music worthy of such an exploration as you have done on this record?

While maybe he is not as recognized as Miles Davis or Thelonious Monk, he is just as important and influential a figure as any, in my opinion. I feel that I just scratched the surface of Cherry’s music; this is just a “sampler,” a pu-pu platter, if you will.

Don Cherry went in so many different directions it’s really hard to put him in a box. He was way into Monk, Fats Navarro and Clifford Brown, but also, African music, Reggae, European folk music, he even rapped on a track on his last recording. There is a track that I swear sounds like something J Dilla would’ve made where Cherry is just breathing through his trumpet for like two solid minutes over a beat. It is beautiful.

He also incorporates samples of spoken word recordings, things people are doing now, but this is 25-30 years ago. I love the entire message of his music, but also who he is as a musician: not really caring about style, genre, or boundaries. His music is not driven by ego. My favorite quote of his is, “When people believe in boundaries, they become part of them.” I like that and want to strive for that as well.

Outside of jazz and classical, doing a “cover” or “tribute” album is generally derided and seen as lesser than making original music. What is it about jazz that embraces works of tribute like “Awake”?

That’s a great question and a good point. There definitely are factions of jazz musicians who would say the same thing about playing and recording original music over making a cover or tribute album. That said, on “Awake” we are not playing the songs and solos note-for-note, the same way a Led Zeppelin tribute band might play “Stairway to Heaven” with John Bonham’s exact drum fills and Jimmy Page’s exact guitar solos.

We are approaching the compositions with our own voices, our own energy, our own vocabulary, and our own influences. Doing a tribute like this is our way of communing with the spirits of the masters, honoring their memory and ultimately connecting and continuing that deep tradition.

As students of jazz, generally speaking, we spend years studying, listening, transcribing, and emulating. Ultimately, our end result is to develop an individual sound and identity. It is also about the communal aspect of the music, both with the band and with the audience. Each performance and experience is different depending on the venue, weather, mood, size of the crowd, etc.

Cherry sums this idea up nicely himself: “Well for one thing … it’s actually not my music … it’s a culmination of different experiences and different cultures and different composers that involves the music that we play together more than when I’m playing alone.”

Your next album is coming out in January. What can you tell us about that?

I am excited about that one as well. “The Jewel” will be released on Ropeadope Records. The album was recorded in NYC during the summer of 2018 and features some incredible players, namely Matt Wilson on drums and John Tate on bass.

Jamie Breiwick will be a part of “Vinyl Comes Alive” on Nov. 8 and 9.

On Friday, Nov. 15, Breiwick will be in conversation at the Jazz Gallery Center for the Arts discussing the “Milwaukee Jazz” book, with a performance from his jazz/hip-hop improv project KASE.