You Should Know Immortal Girlfriend

You Should Know Immortal Girlfriend 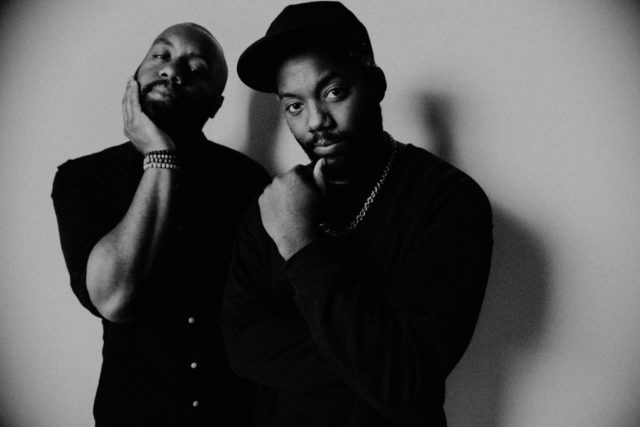 Brothers Will and Kevin Bush, who create electronic pop under the moniker Immortal Girlfriend, are ending the year strong, recently opening for Thievery Corporation at the Pabst Theater after winning a Backline artist grant. The duo will be performing the Backline showcase at the Radio Milwaukee Music Awards this Saturday, Dec. 14. We had chatted with the duo about their banner year, where they started and what keeps them going.

Kevin Bush: Our family was always musical, on both sides. My musical journey started when I was 11. I wanted to play drums, out of the blue. My grandfather bought me a guitar and I learned that. My dad plays bass, my mom plays guitar — so you just start picking up a little bit of everything.

Will Bush: I got into the music game kind of late. I was the art school dropout. I’m like, “I’m not going to make visual art anymore, but I’m an artist. What do I do?” I went to MIAD for a year and a half and didn’t want to draw nude bodies anymore. I started playing guitar around that time; 18, 19. Soon after that I started messing with electronic music. I just got a laptop from a friend with FL Studio 4, like way back. That’s how I started; delving more into the electronic side while also learning guitar. Kevin and I slowly started collaborating back then, jamming in the basement.

Where can we find that??

Will: That was our first time playing out, playing in front of people. Getting used to what it was like being in a band. When that ended we started collaborating on electronic music ourselves around 2010. Blending different genres and around that time I was influenced by bands like Naked & Famous, M83…

Will: It was a nice electronic alternative artist kind of time. After that we started experimenting making music in that vein. We moved into the studio around 2016/2017 and that’s when the Immortal Girlfriend project came around. I wanted to make something super electronic; all synthy, all electronic. That’s kind of where we’re at now.

2. As brothers, do you have a more telepathic vibe while writing than you do collaborating with other artists you aren’t related to?

Will: We know what we like, a lot of the time it’s on the same page but sometimes it’s not. We got to a point where we’re able to put that aside. It was always for the betterment of the song. We’d come back to what makes the song better. It took ego out of it. We’re pretty chill as brothers as it is, we get along. It made sense the most to just be a duo and we take care of all that. We’re not worried about a bunch of different influences and resources; which is a positive and a negative. Our workflow started from the early 2010 era until now, it kind of flowed. It’s been almost 10 years making electronic music.

3. When you came into the Milwaukee scene, what was that like for you?

Will: It was really cool to be introduced to it. We were really introduced via Tarik Moody and Jay Anderson. They played a really big part in introducing us to the scene, shouts out to them, for real.

Did you grow up near Lannon, Wis.?

Kevin: No, that was just where the studio was. We lived around Milwaukee, like the North Side.

You didn’t get into the music scene then?

Will: No, it was kind of cool because we knew about a lot of people; WebsterX, Lex Allen. We knew a lot about the Milwaukee scene. It was cool to make that transition to hanging out with these people, seeing these people at shows. The scene was really supportive. There are always waves of classes of people like “the class of… this time.” We got to be a part of a wave of a lot of people. There are so many dope artists in this city and being able to have a studio and work with a lot of those artists by word of mouth… it was really eye opening to us. We were a part of it, but also observing it. To be a part of it felt a little surreal in a way. Music can be very uniting.

4. How’s the Backline experience been for you?

Will: So far, so good. We’re looking to expand what we’ve built upon and put out new music early next year with some visuals and more vibes. More of the Immortal Girlfriend universe will be birthed into this plane of existence.

Kevin: There’s Backline Vision, their mental health program, which I’m taking a lot more from that than I thought I would, initially. We’re working toward being successful, whatever that means to us. What’s that really mean if you’re not happy when you get there? I really appreciate it.

Will: It’s necessary. As artists, it’s easy to be misunderstood. Going after your dreams isn’t easy, for anyone. Any kind of encouragement in that regard definitely helps. Overall well-being; mental, physical, spiritual… you gotta be up on that. Be in touch. Present and aware. We can’t all make music and art out of pain. It can’t all be pain. There has to be joy sometimes.

5. What keeps you making music?

Will: Ideas keep coming to me. Until they stop, I’m going to keep going with it. Beyond that, I think music has a uniting power, but it has a healing power too. I think that’s important, especially for the world as divided as people are or as sick as people are. Myself, included. Music can really elevate and lift the spirit. We need more of that in the world. We need more creators, more of that put back into the world. It’s still fun. It’s never not fun. If it ever stops being fun, maybe I’ll find something else.

Will, when you mentioned music being elevating in times of sickness, did you want to expand on that in your experience?

Will: For me, going through my cancer situation and still dealing with some of the stuff, currently, it can elevate you and take you out of your circumstance. It can either put you in a nostalgic mind frame, put you in the past, or put you in a heavenly state of being — depending on what you’re listening to. Soundwaves and frequencies… the more we look into the effect on the body and endorphins, it all has a major effect on people. There’s a reason why people still go to shows and still listen to music, even in the streaming age where you can listen to a song over and over. There’s an energy with it live and you’re getting something that might get lost in streaming.

It can even go beyond us sometimes. We’ll come up with a song and sometimes it feels we’re just channeling it.

Will: When people are feeling it, we’re like “Hey, we’re feeling it, too.” And it’s beyond us. That’s the special thing about music.