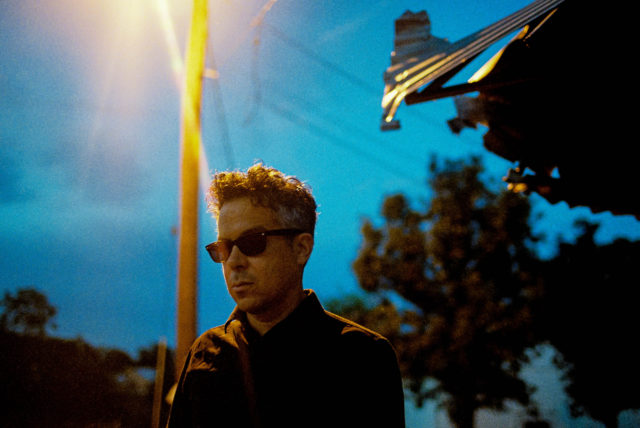 Matt Ward’s new album “Migration Stories” was inspired by his own family’s migration story. His grandfather paid $5 to become an American citizen when he crossed over from Mexico to Texas in the 1920]s. Ward spent some time talking to his aunts, uncles and any other family to learn the story of his grandfather to see how his migration story compares to migration stories today. That mini ethnography set the groundwork for the new album. We talk about that and his favorite niche Trader Joe’s brand snack item, among other things in the interview below.

On the last album we talked and you were freewheeling, shooting from the hip, no label, putting it out wherever he wants to. And now we’re back on ANTI- for “Migration Stories.” How did being back on the label kind of change the way that you were making this, if it did? And what have been some of the benefits and some of the things that you learned from that experience, freewheeling?

I was a little bit in limbo a couple of years ago. I just wanted to try something new. I think it’s every artist’s fantasy to be able to put out a record without having to do any of the promotional stuff. And I wanted to try it. And so that was the record I made a couple of years ago called What a Wonderful Industry and it was a fun experiment. It’s not something I’ll ever do again. But I got it out of my system and now I’m really happy to be working with ANTI-.

How did it feel to get it out of your system and why would you never do it again?

It’s a funny thing. I work hard for these records even if sometimes they sound like they were recorded really quickly. But you want them to have a bit of staying power. And when you put out a record, when you surprise release it, it’s not on anyone’s blackboard, on Monday morning, if you know what I mean. So yeah, it was an experiment. I’m now happy to be working with a team of people instead of completely flying by the seat of my pants, as far as getting the record out to people, which is what I did on my very first cassette tapes that I did. So it was fun to revisit that, but then you realize, “Okay, it’s great to have a great team behind you to keep the fire burning.”

For “Migration Stories,” it’s like a folk record and it also has those great synthesizers in it that I think normally when you’re like, “Oh, this has this kind of thing that is not traditionally thought of in sound.” But how did you manage to kind of pull those into your sound and what were you aiming for in how you wanted this album to sound?

I knew I wanted a lot of space on the record and I’m working with different musicians on this record. I went to Montreal to work with a few of the guys from Arcade Fire and they are experts at a lot of these old keyboards that I had never heard of. And my ideal situation is going into a production of a record  with some things left unprogrammed and left to chance and left to your collaborator’s creativity or impulses. They were able to just create these incredible textures that I could definitely have never done on my own. So I’m really indebted to them for a big part of the spirit of the record.

And then lyrically, I love a folk songwriter telling their own folk story, it’s like a discovering of yourself and being able to tell that story. For those who don’t know, can you tell what this record is about and that story and the people in it?

It’s mainly inspired by newspaper articles that I’ve been reading over the last couple of years about movements in the world and consing maybe too many articles about the migration crisis in North America and the one in Europe. And being able to have the opportunity to talk to people out there, and here, about solutions. And if there is some sort of a spiritual, hopeful angle to migration, then I wanted to try to illustrate it or shine some kind of light on it by using music in this record.

I heard that a bit of the inspiration was, was it your grandpa, coming up from Mexico? Did you know him?

Yeah, he lived to be about 102, and yeah, he’s a lifer. So he died when I was a teenager. But he had kind of a big family and over the last couple of years I’ve been hearing stories about his crossing from Mexico to Southern California by way of Texas, Colorado, New Mexico, Arizona. His own migration happened in 1920. And because there’s no photos of his journey or journals or anything, we are left to fill in the blanks and I can’t help but compare his story to the articles that I’ve been reading over the last couple of years about the migrant experience and trying to color it in, in a hopeful way. And music also can help with that. There’s a song on the record from that era called “Along the Santa Fe Trail” that I heard on the radio a couple of years ago and it seemed like a good song to try to cover and try to include in the record. So that made it on there. It’s the only cover song.

Why did he move around so much?

What was he doing?

He was a rancher. He and some of his family found work in El Paso, Texas and eventually made it to Southern California, where my mother was born. I read Grapes of Wrath years ago, but it also seems like there’s echoes of those stories too. A lot of hardship, but also some hope and I feel like hardship and bad news is very easy to find right now, in any website and newspaper. I feel like music is a place that can give you something to stand on, tomorrow.

And so without any photos or articles. How do you find out the stories about him?

Family, uncles, aunts and that’s basically all there is.

So you had to call them up and sit down with them?

Yeah, I have an uncle who lives in Riverside, California and some of my family have done the 23 and Me thing where you find out about your genealogy. So that’s been happening also the last couple of years. And it’s been an eye opening experience.

What was your favorite story that someone told you about him?

Just the fact that he was able to become an American citizen for $5. It was that easy and that simple. And the country was welcoming and it seemed like the borderline almost didn’t even exist. I like to think that it’s a better way of looking at humanity to me, than in the divisions.

In that system, the system is to encourage people coming in.

Yeah, it’s an incredible story and it sounds like it happened in some foreign country, but not at all. It’s all true and it’s partly my story because it was my own family.

Well I’m glad that we get to hear his story and your story and the larger story too. I have like a lightning round of questions that I’ve got because I think it’s fun just to have a little bit of fun while we’re in this.

Where are you holding out?

What has been the best podcast you’ve listened to in quarantine?

I don’t listen to podcasts.

Unfortunately, Zoom Meetings. I still really don’t like the computer. It’s still my last resort. But it still takes the cake I guess, because it’s the only one I know how to do.

Have you made a sourdough starter?

No, I’ve basically been eating food from Trader Joe’s.

I have seen a lot. “Gone With the Wind” has been on my list forever and it’s not anything I’ve ever felt the urgency to do because it’s so long. But I did watch it this weekend, I finished it and it’s not a perfect movie by any stretch, but I really recommend the first half of it. Just for the cinematography. It’s a beautiful film.

Yes, the day the record was released Spin Magazine asked me to do a couple of lullaby songs and a few hours earlier, I heard that Bill Withers passed. So I sang a couple Bill Withers’ songs.

What’s been your go-to junk food, or since you already revealed that it’s Trader Joe’s, what’s your favorite, niche Trader Joe’s item?

They have these almonds that are covered in sea salt in dark chocolate. I recommend those to everyone.

Oh, I know what ones you’re talking about. Have you started and finished a book?

Not during quarantine. But I took up Bram Stoker’s “Dracula” about a month ago and I’m about halfway through. And similar to “Gone With the Wind,” the first half was really great and now I’m in this sort of difficult second house, that is still good. But yeah, that’s another book I recommend, Bram Stoker’s “Dracula,” which everyone has probably read already.

Well there’s this thing in the neighborhood that people are doing where you go to the coffee shop and farmers are bringing these big boxes of fresh vegetables for like $20. You get this giant box of vegetables. So I guess the first thing that comes to mind is roasted beets with very simple sea salt and olive oil.

What song have you listened to the most?

I would say the record I’ve been spending the most time with is this John Coltrane record called “Ballads,” which I’m sure is probably my favorite record of all time because it’s the one that I have played the most. If I had to pick one song, I would say a song called, “Say it Over and Over Again.”

Why is it your favorite album of all time?

It’s like medicine. Whatever emotion you’re feeling, it will support that. And show you the light.