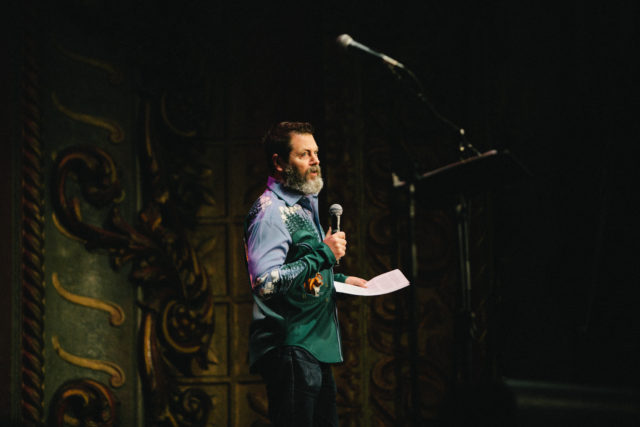 Nick Offerman is best known as Ron Swanson in “Parks and Recreation.” He’s also an accomplished woodworker, writer and public speaker. He is coming to Milwaukee this Thursday, Sept. 12, to the Riverside Theater.

He’s also a Tom Waits fanatic, something I can relate to. I used to host a radio show called “Tom Waits and Tom Waits play Tom Waits” where I impersonated Tom Waits and played his music and music that influenced him, so his enthusiasm was well-matched. We discussed his (many) favorite Wait songs.

Nick, what is the last song that you couldn’t stop listening to?

The last song I couldn’t stop listening to is called “Hold On” by Tom Waits.

I’m so thrilled by this because Tom Waits is my favorite artist of all time.

Well then, we have a lot in common.

Let’s talk about Tom Waits. He is a very unique artist. What do you think makes him unique and what do you like about him?

Oh boy. Well, I mean, you know, is his sensibility, his, his talent, his taste, his very peculiar character and his sense of humor and his romance. Also the sort of mysterious collaboration with his wife, Kathleen Brennan, who is co-credited on a lot of the writing, but no one ever knows exactly who does what. He’s the troubadour for the romantic with a twinkle in his or her eye.

I think the most underlying thing about him is his romance.

Yeah. That’s what first hooked me. A young lady in college played me, “I Hope That I Don’t Fall In Love With You” on a the guitar. That was the first inkling I had of him. Unfortunately I wish she had been playing it to me, but she was auditioning it for me, asking if I thought it would be good for her to play it for the guys she wished she hoped she didn’t fall in love with.

So from the get go, I was like, “Oh, Jesus, what is this? What is this bewitching, romantic, gorgeous tale?” So then his early records, I was always struck by his take on “Somewhere” from West Side Story. It’s one of the gruffest renditions of a song that is somehow, at the same time, filled with heartbreak and tenderness.

And you either get it or you don’t. Cause I remember then playing it for my mom and dad and saying, guys, look at this incredible artist. He’s been recording since about the year I was born, 1970, and check out this version of the “West Side Story” song. And I played it and my dad [characteristic Nick Offerman laugh]. My Dad is a simple Midwesterner, so  he says, “Sounds like he got in a fight and someone punched him in the neck.” I said, you know, “Dad, you don’t understand me.”

I think people love the gruffness of his voice and that kind of like wild man carnival barker. But I am more into the ballroom balladeer myself. You spoke about his humor, which I think is such a huge part of his music. He’s this carnival barker, but he’s also funny.

There’s no one funnier. I mean, to touch on what you said, the thing about the gruffness in his voice, it’s a legitimacy. The gravelly voice immediately tells you he has been there. Like any shit you can think of. He’s seen it. He paints these worlds of carney backstage characters and, you know, legless table top piano players, and you’re like, yeah, I believe from the way you’ve created this voice and this persona, I believe that you have emptied bottles of cheap rum with these characters. But then, yes, and that’s why it’s funny.

Across my life, I had a theater company in Chicago called the Defiant Theatre and we colored as many of our productions with Tom Waits music as possible. We would use instrumentals from “The Black Rider,” as like scene shift music. He has really been the soundtrack to my life.

When “Mule Variations” came out in 1999 that was just sort of the pinnacle. I was, I don’t know, was 28 or 29. I was coming of age, sort of graduating from the wild youth of my twenties. And, uh, it was really, really hard to pick a song for this program from that record because there’s five or six that I feel are just the anthems of my life. Um, not only the ballroom balladeer of which you speak, but there’s a couple of messages on that record.

And then later there’s a song called “Come On Up to the House,” that is basically a sort of comforting, admonition, saying, “Look. The world is hard. You know, things have not gone great for any of us, but come on up to the house, everyone get together around the table and that’s how we keep going. That’s how we make everything. Okay. We will always have tragedy and hardship, but if we come on up to the house, everybody stick together in a family or community and that’s how we will succeed and get through it.” And I mean those are deeply wise ways to go about achieving a healthy life. So besides being moved by his music, you know, you could embroider those things on a pillow and they are words to live by.

Well, uh, I knew you were going to ask that and I don’t have a succinct scientific answer. That record, I was shooting a movie in New Orleans called “Lush” when that record came out and I went out and I got it on vinyl and CD. I was staying in an apartment of somebody on the prop crew. It was a low budget movie. And I had the day off. So I was able to just put on the record and consume it. From the moment I heard that song, it just is the epitome for me of the romantic heart of Tom Waits music bursting with love. And the sort of, hopeless nature of, you know, it brings to mind his earlier song “Stone Blind Love,” just the sensibility of being so in love that you can’t stand it. So just musically it almost makes me tear up. When I just hear the music start. And then beyond that, the lyrics, the story, the descriptions of this girl, another sort of misbegotten character who just seems to be in search of love, but she’s standing outside a store dancing in the cold with no music. Like, um, there’s some something, there’s something about it that just, it’s a pushes my love button.

There are a few people that can write, or have written with that kind of musical romance and then that just kind of pure love that I feel as well when I listen to that. Um, perfect.

There are two other songs on that record that are so… god damn beautiful. One is called “Take It with Me.” Uh, and Megan used to sing that with her band years ago. With her previous band years ago. And imagine. Imagine feeling this way about Tom Waits and then you marry someone with incredible pipes. In fact, that was one of the first moves, unbeknownst to her, when we met, we were doing a play, and she had recorded her first record with this previous band called Supreme Music Program. And she said, “Hey, I just recorded some songs with my band, can I play them for you?” And the first one we listened to was “Ruby’s Arms,” an early, early beautiful Tom Waits song. I mean, just a heartbreaking ballad.

And you know, I was like, “Well, okay, I’m screwed. You may do as you please with me, ma’am.” The other, equally gorgeous song on that record is called, “Picture In a Frame.”

Yeah. That was the song I chose for the walking into our wedding. Megan chose Louis Armstrong’s “What A Wonderful World.” And then as the recessional I chose “Picture In a Frame.”

It’s unbelievable. And we’ve left out, you know, countless records and songs, but there’s one other, one other lyric I want to point out that it is just blows me away every time.

It’s on “Real Gone” from the early 2000s, and it’s a song called “Day After Tomorrow.” It’s about a young soldier who is at war in the Middle East and he’s been promised that he gets to go home the day after tomorrow. And it has these lines that actually quoted in, uh, in my book, “Gumption.” They’re so gorgeous, that I’m shutting my eyes cause I’m doing all of this without, uh, a reference, but, he’s thinking about the other side, the soldiers on the other side and says, you know, “I imagine they don’t want to die anymore than we do. And we’re all praying to the same God. So tell me how, how does God choose whose prayers does he refuse? Who, who rolls the dice and who spins the wheel on the day after tomorrow?”

And that simple notion of that simple sort of antiwar, John and Yoko notion of like, if you just stop and think about it, none of these, none of all of these young men and women would prefer to be here getting ready to kill each other in the name of what? Oil profits? But it’s such a succinct way of putting it. And again, like you said, he, and presumably in his collaboration with Kathleen, they are able to glean the most gorgeous and moving sentiments out of the tiniest gestures.

Yeah. I remember I was graduating from college and I was applying to all these jobs and I was getting rejected from one after another and they, like the timeline was closing in. I had two months to graduate and I had nothing to show for it so far. And I was going down the street and I was listening to the song “On The Nickel” and in “On The Nickel” he says, “The world keeps on getting bigger when you get out on your own.” And I lost it. It was my whole world. How succinctly to just put it like that. My entire life and my entire education to say the world keeps getting bigger when you get out on your own. It was just crushing.

Yeah. I mean, you know, that’s, that’s great art. When anyone can see themselves in it, when it’s emotionally applicable to anyone’s life situation across the decades. It’s timeless. It’s huge. So from that record, I’m not going to think of a song title might be “Kentucky Avenue,” but there’s that song that ends with, “So you asked me what I’m doing here holding up a lamppost, flipping this quarter, trying to make up my mind. If it’s heads I go to Tennessee. If it’s tails I buy you a drink. And if it lands on the edge, I’ll keep talking to you.

That’s great. Okay. This has been such a wonderful 20 minute conversation about, an artist that we both love. So thank you. Thank you so much.

My pleasure. And I mean, it’s, you know, it’s just a drop in the bucket. We’re going to have Ken Burns come over and we’ll do a whole seven part series.

Yeah. I appreciate it. And, um, I’m glad that I’m not alone.

Yeah, me too. All right, Nick.

All right, well thank you. Have a beautiful day and I’ll see you in Milwaukee.