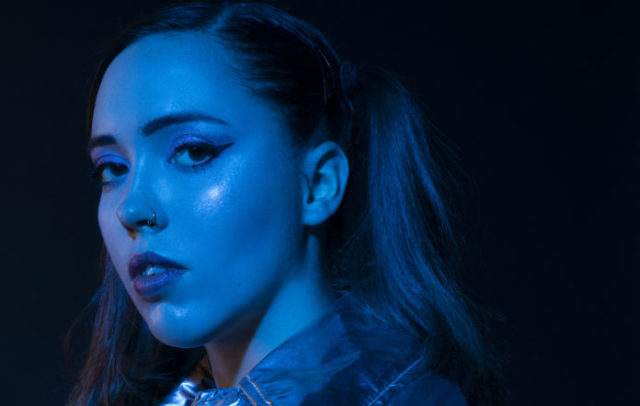 Soccer Mommy is the project of Sophie Allison. When she was at NYU she recorded, produced and mixed her first album. She just released her new album, “color theory” and we have been playing “circle the drain.” In our conversation below, she talks about Hillary Duff, Bruce Springsteen, Joni Mitchell, Phoebe Bridgers and the songs that define her.

I think everybody in their life has had their first band that made them fall in love with music, what was that band for you?

It was pop music like the kind of young-kid, pop music that was happening like Hilary Duff and Avril Lavigne and Disney stars and stuff like that. It was these pop stars. And they did set that for me, and I think, often times I can hear it in the music now even. Just that inspiration from the time of those Max Martin songs that were all huge and produced very similarly. Avril Lavigne was definitely a huge one and Hilary Duff was a huge one, she was actually my first concert.

I feel like a lot of us from that time, like I loved NSYNC, and for a long time it felt like when I talked about music I had to be like, “I really got into, ‘insert more serious musician here’” and I like brushed over and didn’t acknowledge that, myself. But knowing every single NSYNC word to every single album ever, it was big for my musical development.

No, I think everyone had that. Especially people my age were all listening to that kind of stuff  when they were really young. So even if they think it sucks now, or whatever, I think that’s just kind of like a stupid take in my opinion. Being like “these pop stars that were huge and wrote these pop songs that literally everyone knows are bad” and they just like can’t sing and these songs are stupid, the lyrics are stupid. And it’s like, yeah, but I don’t think a lot of people realize how hard it is to write something that catchy and perfect in all these ways that make you want to sing it and make it in your head and sometimes even in an annoying way. I think people just don’t realize how hard it is to make something so catchy, melodically and chord-wise, that it sticks with you that hard.

Yeah, that’s huge and so hard to do. Hilary Duff was your first concert, do you have a favorite Hilary Duff song?

That was a banger.

When I was young is was also the music my dad played me. That was the stuff that was the first music I loved, just because I was so young, I was listening to his music in the car. A big one was definitely Springsteen. Which is someone I still love, today. That, and I think The Who was a big one that I can really remember wanting to hear that CD in the car, specifically, from his CD booklet. So that kind of stuff, the “dad music” was what was inspiring me from the very beginning.

Do you have a Springsteen song that reminds you of your dad?

I would say, “Born in the USA.” It’s one that I can vividly remember being in the car, in this old minivan we used to have, and going through the CD booklet and always wanting to hear that one when I was a little kid. Yeah, that’s the one that I feel like reminds me most of my childhood.

It sounds like you have a specific memory there?

Yeah, I think more than like, a one-time-memory it’s just this memory of constantly doing this over and over again. As a little kid, getting in the car and being like “put on this song.” You know, kind of begging my dad to put on this song. Being like oh put on that one, put in the CD and go to track 2. And I just remember, weirdly, hearing the first verse to that song and it can never not make me think of literally sitting in this old mini-van and really liking that verse and thinking the lyrics were weird because I was just a little kid.

Is there a song that you feel like is written for you?

That’s hard. I don’t know if I feel I have a song that I’m like, wow, they literally knew what was going on in my life. I mean I have a ton of songs that are these songs that whenever I’m feeling really down I can go to, knowing it’s just going to tear me apart. But it’s not always because it’s not, not, relating to things I felt. But it’s not like the lyrics are literally exactly something that happened to me. I feel like songs like, Joni Mitchell has some songs like that. Any time I’m really low I can go that and it can kind of rip me apart emotionally and hit me in a way a lot of other music can’t.

I bought Joni Mitchell’s Blue the other day, like two months ago, and so I’m in the midst of a dive. What is a Joni Mitchell song that you go to that feels like you can get it out and what about that song feels the way that it feels to you.

I mean it’s so cliche to say this one because everyone knows that “A Case Of You” is like, just an amazing song. But it is so amazing and I feel like it’s not the song that just has this single point in it, it’s just like kind of airing a lot of stuff about a love that’s kind of weaning I guess. It’s bringing up a lot of feelings about it and not just like focusing on telling this exact story of what went wrong and all this stuff. And I feel like that kind of music is always something that I’ve just loved that doesn’t just like have this feeling like it’s someone trying to get to the point. It just feels like someone bleeding a little bit, like out this pain. So obviously that’s a great one. That and “River” is another really good one that I just feel like is so lonely.

What do you think she’s trying to say with “A Case Of You?” Because sometimes I listen to “A Case Of You” and I hear her saying, “I could drink a case of you / And still be on my feet” there’s a part of me that thinks, the idea of wanting to drink a case of somebody is so beautiful and touching, but then the effect that it has on her is to bring her down. And there’s a part of that, that is like, is it sweet in her saying “I want to drink a case of your personality” or is it saying like, this thing is messing me up and I’m still on my feet.

Well, I think that’s the exact kind of point of the relationship. Like this thing is something you love and wanting it, I guess, but also it not being great. You know, its like kind of a mixture of that. I mean I can’t speak for her, but I feel like it really is about feeling something dissipating a little bit and even looking back on something that has dissipated and having that longing but it’s also knowing that it really wasn’t good. I mean there’s that one verse, I forget which verse it is. It’s later on in the song where she’s like talking about someone saying “Go to him, stay with him if you can, but be prepared to bleed.” And it’s kind of like about this being like, there is love there and it’s strong, like painful. And that’s not always good even if it is real.

One question that I always ask is, what’s the last song you couldn’t stop listening to? And not too long ago I talked to Phoebe Bridgers and Conor Oberst and they picked “Scorpio Rising” and it was very sweet and they said some very wonderful things about you. So I was wondering if you had a favorite “Better Oblivion Community Center” song or a favorite Phoebe Bridgers song?

That’s hard because I like a lot of Phoebe’s music and I like that album. I think my favorite one on the “Better Oblivion Community Center” album, I haven’t listened to it in a second, but I had a phase when it came out where I was listening to it a lot, it’s called “Chesapeake.” That one. It’s really, really good.

I mean she’s an amazing lyricist and beyond that, her music has this, it has like kind of a darkness to it. Like it has, you know, the vibe of a lot of singer-songwriters. But it has like darkness and dullness kind of added into it. Like it has a flavor to it, I guess, that is very much hers and it’s very lonely and sad, but not completely drowned in sadness just tired from it. And it feels very heavy without being melodramatic.