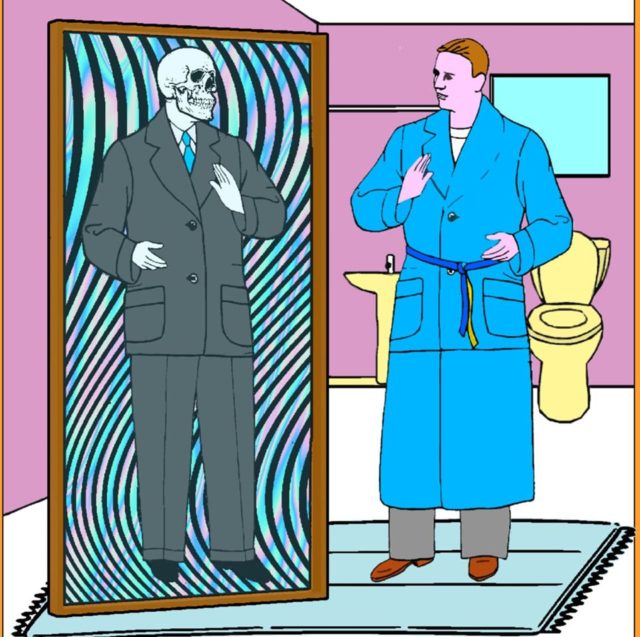 Future Plans have been playing as a unit since 2015, but it was only this month that they got their first release out in the world. The band’s self-titled full length touches on highly relevant themes of changing times, self-awareness and self-reflection.

Future Plans became the group they are today in 2015. Travis (guitar and vocals) and Corey (drums) played together in No Bueno and Winter Bear. Once No Bueno disbanded, the pair wanted to continue to play together and, after a few lineup changes, pulled in mutual friends Andy (guitar) and Trevor (bass).

Local music made an impact on the group growing up. “I’d say the three of us can all pinpoint a lot of our influences to the various bands that were going on during that time. Timebomb Tom who ran the Cafe always booked these ridiculous shows and bands would skip Milwaukee to play Green Bay instead. We all were going to school in Milwaukee but because there were always these incredible shows going on in Green Bay, we found ourselves driving up there after class pretty often. We were all pretty lucky to be exposed to all of it. It definitely left a lasting impression on me,” Corey says.

Alongside local music, Future Plans pull from some greats. Influenced by Undertones, Primitives, the Shop Assistants, and the like, the power pop punk ‘fit encapsulates that high energy, pop indie punk blend.

The self-titled album focuses on the increasingly relevant realities of becoming more self-aware and observing the day to day changes that are unavoidable. While the heavy themes envelope the compilation, the slightly daunting authenticity is both empathetic and relatable.

Travis explains, “The lyrical themes arose just through getting older and priorities shifting. For me, the things that seemed important in my 20s weren’t as important in my 30s. I changed and my friends changed. Instead of falling in love and partying, things like dealing with anxieties and depression and either fulfilling life goals or dealing with not fulfilling goals and disappointment were more common issues.”

Listen below and catch them at their album release show Dec. 6th at Quarters Rock n Roll Palace.