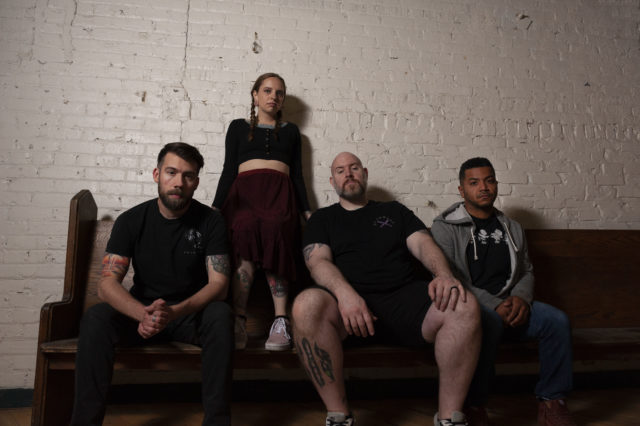 Today Milwaukee super-group Knaaves released the title track from its debut full-length album “The Serpent’s Root,” set for a Sept. 3 release this fall on Confluence Records.

While the band is relatively new, with only a two-song EP under its belt before this, the members have been mainstays of the metalcore and DIY scene for well over a decade. Listening to Knaaves elicits memories of ducking flailing limbs in a sweaty Shorewood Legion Hall mosh pit of the early aughts. While its new single fits into the well-worn groove of Milwaukee’s metalcore roots — d-beat breaks, melodic elements, dissonant harmonics, with the familiar vocals and elements from the band’s previous groups (members of Amora Savant, Enabler, Die Alone) — the track has a more polished production and progressive sound that keeps it forward-looking and offers an exciting peek into what’s next for the band and for the Milwaukee metal scene in general.

If you Google the word “knaves” you’ll find it means “dishonest or unscrupulous men” which the band includes in their bio with the statement, “We are surrounded by deceit and destruction — lies from the media, corruption of our planet and even our own minds shifting thoughts within. Each day is a war on our senses as we struggle to sort out the truth in an age of disinformation.”

Radio Milwaukee reached out to singer Andy Parmann to dig a little deeper into the concept. “We tend to write songs about many different topics but the underlying theme comes back to media manipulation,” he said. “On our title track ‘The Serpent’s Root’ we explored David Koresh and the end of the Branch Davidian. This was a widely publicized raid in the ’90s near Waco, TX that lasted nearly two months and ended with nearly 80 dead. Our lyrics for this song were written as if Koresh was giving his final sermon to the commune as the police raided the building.”

Parmann adds, “Other songs on the record deal with internal struggles with anxiety and depression — mental illnesses that are real issues for many people but we tend to look away or ignore the problem. If there is one thing that I’d like to get out of this band, it would be to let people know that they’re not alone and to encourage others to support those who seem down. It’s not something that anyone should be ashamed of, no matter what we’re led to believe.”

Listen to the title track from the forthcoming album “The Serpent’s Root” by Knaaves: