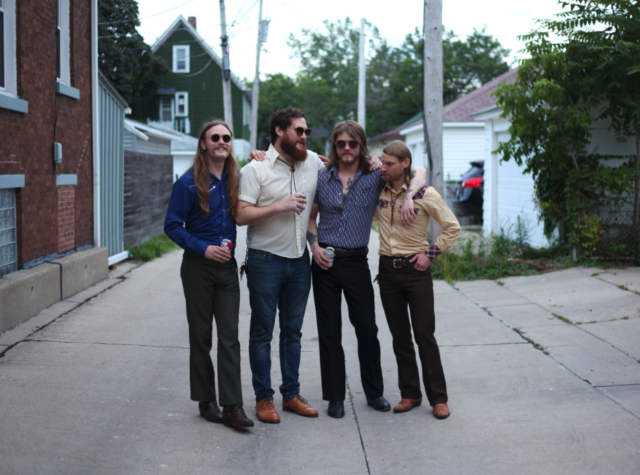 Milwaukee’s Hughes Family Band don’t have much of a traditional country pedigree. The band members are better known for their work in heavy rock and punk groups like Iron Pizza, Sex Scenes, Bad Wig and Appleseed, but as they demonstrate on their debut 7-inch, there can be liberation in being an outsider. The group’s homage to roadhouse country-rock is as spirited and sincere as it is inauthentic: It’s the kind of Hamms-soaked honky tonk that Waylon Jennings might have made if he’d been born in Riverwest and grew up collecting Dusty Medical LPs — which is it so say it really doesn’t sound like anything Jennings ever would have touched but it’s a blast anyway.

The group pairs a couple of namesake Hugheses (pianist/guitarist Nathan Hughes and guitarist Ian Hughes) with drummer Bryce Kedrowicz and singer/bassist Connor LaMue, who conceived the group over a conversation at High Dive about how fun it would be to start a country band. Their 7-inch splits the difference between Center Street and the roadhouse, especially “Death of Me,” which with its boozy horns plays like a Saturday morning cartoon version of “Exile on Main Street.”

Radio Milwaukee is excited to premiere these two rollicking tunes ahead of their 7-inch release on Goodland Records and its release show at The Mothership on Saturday, Jan. 18. The group has called in the calvary for that release show. “We’re talking horn section, we’re talking backup singers,” they write on Facebook. “We’re talking about something real gol’ darn special here folks.”