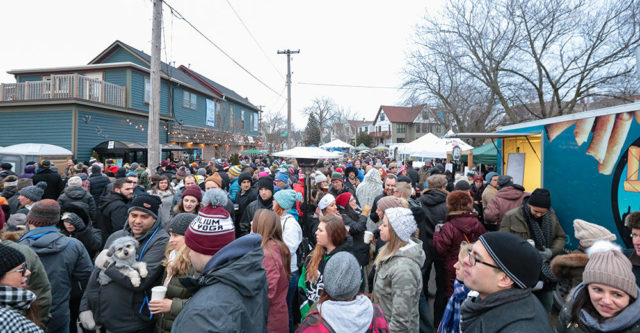 Looking for a primer for some of the best Milwaukee events to be at this week? The Week Ahead is the blog for you.

Mandolin Orange’s is a North Carolina duo that make the kind of music that is so intimate you feel like they’re friends. Friendship is built on support, so you should probably go see them live right?

Stavros Halkias is the kind of comedian you won’t forget seeing. With his bald pate and missing front tooth, he’s crafted a persona that turns potential faults into funny bits as he courts fame in a refreshingly honest way. But hey, it’s comedy… check this video, dude’s pretty funny.

The band Ripe really remind me of Vulfpeck in a good way, so if you need an analog there’s that. on their own merit, they invoke the spirits of rock, funk, R&B, jazz and pop through a kaleidoscope of unpredictable and virtuosic improvisation, Boston-based seven-piece Ripe have a talent for making toes tap and bringing people to their feet. Good traits for a band that makes dance music without algorithms using electricity and not electronics. There’s also a certain warmth that comes out of that, and let’s face it, it’s good to be warm in the winter.

If you’re playing in Miami, you’ve got to get bodies moving. Miami’s latest genre-defying dynamos Magic City Hippies to take the term “indie funk” seriously; dusted with a taste of hip-hop, and baked in an oven of soul, it’s an understatement to say that they’re up to get down given they’re from a city that doesn’t seem to care for sleeping.

Minneapolis-based pop group, Yam Haus, is winning over the indie dominated scene of the Twin Cities with their tightly wound, well-polished pop sounds wrapped around dreamy synths and crisp production. If you wouldn’t hesitate to see Coldplay or Ed Sheeran, don’t hesitate to see these cats, they’re really pretty good.

Lots of folks talk about supporting the next generation but the High School of the Arts makes it easy. As one of the few public options for art education, MHOTA is special, and the talent they help incubate is incomparable. This weekend you can hear the fruits of their music department as they put on their signature public event, The Soul Show. Tickets are very reasonable and if I’m being honest, it’s probably a better show than many others this weekend. So quit talking and start listening as that band plays on…

Milwaukee outfit Xposed 4Heads is a party band that puts on a high energy, witty show. Mash up the B52’s and Devo and you kind of get the picture; a band that takes themselves less seriously than their music (which is really on point btw). Their show also features the Star Girls, two aliens that have come for peace and dancing if you’re down with that sort of thing.

Static Chicken are a band that built their rep on the back of a legendary, decade-plus run of weekly Thursday night shows at The Jazz Estate. They’re funky, fun and jazzy in equal measure; the kind of band that is best experienced live. I was saddened to see their run of shows seemingly come to an end. As you can imagine, I’m pretty pleased to see them back for a show this weekend at The Cooperage in Walker’s Point. And though it might feel a bit strange to see them playing far from their root, maybe it’ll be the beginning of an even better chapter…

Gotta respect the body of work on Chicago DJ Mark Farina who has been working his Mushroom Jazz series since the early ’90s. What is Mushroom Jazz? Many and nearly anything is probably the best answer as he’s helmed it’s course through acid jazz, trip hop, hip hop, house, and jazz in an electro-organic way. Farina is a low-key legend who’s still plying his trade and playing in Milwaukee this weekend. If you like your club music on the smarter side of EDM, don’t skip his set in the Third Ward this weekend.

You know you like the the music of the 80s and 90s. You also know you like our (Shepherd Express, peoples’ choice DJ of the Year!) Morning Show host Dori Zori. Therefore…

You know how “winter is coming” was a thing to say the past few years? Well it’s here, and really every year at Burnhearts in Bay View. Mitten Fest beats cabin fever like a lozenge on a sore throat and is one of the few events that can trump Wisco weather even on a bad day in winter. Trust me when I say you don’t have to suffer alone, there will be thousands out to meet the street as music and libations are aplenty for the offing. The lineup is stacked, with Saebra & Carlyle, Zed Kenzo, Lauryl Sulfate and The Eradicator on tap to help work up a cold sweat.

Though technically two different shows, the strand of sidewalk that separates these two events is merely a half of a city block. A musical two-for-one is what I’m suggesting for those in Riverwest on Saturday who maybe are hedging their bets and making maximum their opportunity to have a good time. Platinum Boys rock, and their shows are a hardcore good time while an ’80s New Wave video night tended by a DJ properly, sounds like a good one-two punch.

The world’s premier classical Chinese dance and music company, Shen Yun is in town this Saturday for their annual visit to the Cream City and is interesting to me this weekend by virtue of there really being nothing like it. Culture, music, dance and artistry come together in this family friendly spectacle. Maybe you too?

Face it, you like to laugh. Marc Maron is a comedian. Maybe it all works out and you get your yuks this weekend, finally. You might recognize him from the Netflix show GLOW but if you need to get familiar with him you might want to check out his wildly successful podcast WTF with Marc Maron where he’s interviewed everyone.

If you like melodic, well-crafted, driving alt guitar pop that rocks or have a yen for alt-rock you should check out this show. The two bands playing Anodyne Coffee in Walker’s Point this Saturday, the Mike Benign Compulsion Eagle Trace are two bands that are on their game playing music you’ll like.