8 of the best collaborations in Milwaukee music

8 of the best collaborations in Milwaukee music 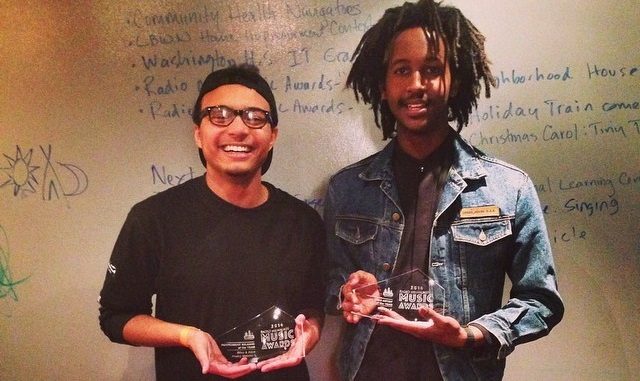 Considered by many to be the project that started this new wave of Milwaukee hip hop, WebsterX’s debut mixtape ‘Desperate Youth’ quickly became a hit in the local music scene. So much so, that the title track became somewhat of an anthem for what Milwaukee music was doing. This was only ampified in May of 2014 when he released the remix to the track, featuring three of the city’s best rappers in Klassik, Von Alexander (Vonny del Fresco at the time) and Lorde Fredd33. The track features WebsterX on the hook, with the other three rappers trading impressive bars. The track still acts as a great example of Milwaukee hip hop’s talent to this day.

This delightfully catchy track is sort of a New Age Narcissism posse cut; with production from Q The Sun, and a smooth verse from Lorde Fredd33, the Lex Allen song is the ultimate manifestation of feeling like you’re on the way up in life. His goal with both the song and the music video was to evoke a 90s house party aesthetic a la Fresh Prince of Bel Air, and he did exactly that. Allen brings his distinct charisma and soulful vocal to the bouncy track, and Lorde Fredd33 contorts his signature vocal style to fit the pop sensibilities of the song perfectly. The song is perfect for brushing off anyone that doubts your dreams, and convincing yourself that you’re capable of anything.

When two of Milwaukee’s most popular and technically talented rappers come together for a song, it is guaranteed to get anyone hyped. On “Let’s Win,” Wave Chapelle both bring their best bars to the table, creating a song all about representing and winning the rap game for Milwaukee. Using basketball analogies, and comparing himself to Kanye for Chicago, Chapelle clearly exudes a confidence in his ability to put Milwaukee on the map. In the second half of the song, IshDARR delivers one of his most impressive verses to date, and displays just as much confidence, if not more, than Chapelle, saying lines like, “going up, and only up, like what the f*** is down?” It is one of the best Milwaukee songs to utilize a more mainstream hip hop sound.

If there was such a thing as a local supergroup, Foreign Goods would be the epitome of it. Originally formed by saxophonist Jay Anderson of New Age Narcissism, this experimental jazz and international music group also features Klassik, Sam Gehrke of Soul Low, B Free, Abby Jeanne and more, with each individual bringing something special to the table. Along with all of these people still working in their respective groups and solo work, Foreign Goods gives regular performances around the city, and can usually be seen at numerous street festivals during the summer. The incredible talent on musicianship on display while watching them perform is exciting to watch, and while it is just a side project for most artists, seeing this many local artists coming together in one group gives hope for more collaboration to come in Milwaukee.

Certainly one of the most underrated songs on the list, “1984” features three of Milwaukee’s most talented and underappreciated artists. Electronic music duo Kiings provide instrumentals that are simple enough to put the main focus on the vocalists and complement them well, while still adding a certain swagger to the song. Bliss & Alice, who is one of Milwaukee’s most poetic rappers, takes control of the track with his complex rhyme schemes, clever wordplay and unique flows that make him stand out among the other artists on the song. WebsterX, as always, uses his distinct voice and style to his advantage to add a perfect complement to Bliss & Alice. Interlaced throughout the song is folk singer King Courteen, who shows his versatility by singing a ridiculously smooth hook for this song. The great verses by these two rappers, along with the catchy chorus, will get this song stuck in your head immediately.

While not featured artists on most of the tracks, Siren and Robb Knapp are vital parts of what makes Mic Kellogg’s debut album ‘Breakfast’ so great. While the album features incredible atmospheric production by Kellogg himself and emotional, melodic rapping from the artist, what really sets this album apart are the beautiful harmonies and background vocals from Knapp and Siren. Their voices add so much soul to every track they’re on, and make the songs feel complete; it feels like Mic Kellogg captured lightning in a bottle with how well they complement him. Without them, Kellogg would not have been able to make an album of this caliber. Knapp, who has release singles “Paradise” and “Jealousy” since the album, will also perform with Kellogg on stage fairly often, and adds so much to his live performance. Hopefully this wonderful collaboration will continue on his future work.

Organized by our friends over at Milwaukee Record, Local Coverage has undoubtedly been Milwaukee’s most unique concert since its inception in 2015. Originally taking place at Club Garibaldi, and now being housed at Turner Hall Ballroom, Local Coverage is a charity event in which several Milwaukee bands cover music from a different band performing that night. Coverage assignments are done through a draft months before the event, and the bands all have to work with each other to learn the other group’s music. The level of camaraderie in Milwaukee music is palpable on stage during the performances, which makes it all the more enjoyable to watch. Artists who have graced the stage for Local Coverage include Whips, Soul Low, Decibully, The Pukes and GGOOLLDD.

Now one of Milwaukee’s biggest and brightest stars, WebsterX had his breakout hit thanks to the help of Siren’s incredible voice with “Doomsday.” The powerfully thematic instrumentals, clever world play by WebsterX and beautifully dark and anthemic vocals of Siren on the chorus make this one of the best songs to come out of Milwaukee in the last 5 years. The song manages to give you a unsettling, eerie feeling and a slight glimmer of hope at the same time. Collaboration between New Age Narcissism groupmates is certainly a common occurrence, but this one might be the best of them all. “Doomsday” became a huge hit for the rapper, being featured on Noisey and Entertainment Weekly, as well as generating well over 1 million streams.

Collaboration between musicians is a vital part to the survival and growth of any local music scene. Artists going out of their comfort zone to work with people that have different styles and sensibilities from them can only lead to improvement. Luckily for Milwaukee’s scene, you can find countless cases of local collaboration. Whether it is through, songs, concerts or even entire bands, Milwaukee artists have made some great music by working together. Here are just 8 of the best collaborations in Milwaukee music.