Missy Elliott and Lizzo had big nights at the 2019 VMAs

Missy Elliott and Lizzo had big nights at the 2019 VMAs 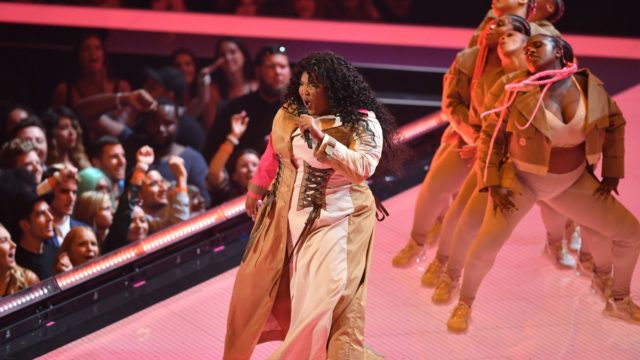 On this early Tuesday morning, we sit facing a yawning precipice: the longest possible stretch of time in which no one is called upon to watch MTV’s Video Music Awards. Bask in the sweet, creamy silence of it all. We’ve earned it!

That said, it was a better-than-usual year for the stalwart awards show, which has been running since 1984 and tends to be best known for its moments of outrageousness. (Think Kanye West rushing the stage while Taylor Swift attempted to give a victory speech in 2009, or Miley Cyrus twerking alongside Robin Thicke four years later.) This year, the handing out of trophies barely registered, but a handful of performances and moments still shone through the din. Here’s a quick rundown.

1. Missy Elliott got her moment, and then some. The hip-hop legend won a wildly overdue Video Vanguard award — the VMAs equivalent of a Hall of Fame induction — and celebrated with a terrific medley that featured “The Rain,” “Hot Boyz,” “Get Ur Freak On,” “Work It,” “Pass That Dutch” and “Lose Control.” Elliott received a lovely bundle of testimonials from the likes of Lizzo, adulation from an ecstatic crowd and the opportunity to give a gracious speech in which she heaped praise on God, her dancers and other sources of strength.

2. Lizzo’s star turn has only begun. Though the incalculably appealing breakout star went home empty-handed, trophy-wise, her medley of “Truth Hurts” and “Good As Hell” was a huge standout for the night — a win that’ll do a lot more for her staying power than some statuette. Flanked by her marvelous team of dancers, Lizzo sang her guts out while performing in the figurative shadow of a gigantic CGI rear end, a move that was funny and raucous without crowding out her moments of poignancy.

3. Even more than usual, the actual awards barely qualified as an afterthought. All you need to know about the VMAs — the awards themselves — is that the prize for Artist of the Year was announced in a voiceover in passing, the way you’d quickly acknowledge the winner of, like, Best Costuming in an R&B Video by a Duo or Group. (Ariana Grande won Artist of the Year, but since she wasn’t in the room, why bother?)

5. It was a big night for Taylor Swift in general. The pop star, whose new album Lover came out Friday, opened the night with a medley of “You Need to Calm Down” and “Lover,” filling the screen with drag queens, vibrant colors and all the CGI emoji fit to print. When she won Video for Good — the VMAs’ prize honoring socially conscious messaging — Swift shrewdly let collaborator Todrick Hall give the speech. She even wound up adjacent to one of the night’s big memeable moments: presenter John Travolta handing the Video of the Year trophy to Jade Jolie, presumably thinking the Drag Race veteran was Swift.

6. Latin music got its due. Outside of, say, the Latin Grammys, Latin music tends to get short shrift in major music awards shows; it might get a medley here or there, but tends to get consigned to the margins. The 2019 VMAs understood what a creative and commercial force Latin music has become, and smartly let the music weave its way throughout the telecast as a result. Rosalía, J Balvin, Bad Bunny, Shawn Mendes and Camila Cabello all performed, while Cardi B’s live-wire goofiness was a dominant presence over the course of the night.

7. Normani is next. The Fifth Harmony singer performed a grabby, impeccably choreographed re-creation of her “Motivation” video, turning heads late in a telecast that had begun to sag. It’s the year of Lil Nas X, and Billie Eilish, and Lizzo, and Megan Thee Stallion — and it’s the year of Normani, too.

8. Lil Nas X isn’t done yet. Okay, so “Old Town Road” has finally been dethroned after a record-setting run atop the Billboard Hot 100. But the genre-smashing, social-media-savvy star has more ideas to burn, if his sly and funny VMAs performance is any indication. The charming, lighthearted intro to his seemingly TRON-inspired performance of “Panini” had some of the night’s biggest (only?) laughs.

9. Why don’t they let Joe Jonas perform onsite? In 2017, Joe Jonas’ band DNCE performed at the VMAs — sort of — by playing a set in Las Vegas that got stitched into the telecast from afar. This year, The Jonas Brothers returned to the VMAs after an 11-year absence, but were consigned to yet another stage, this time in Asbury Park, New Jersey. Is Joe Jonas not allowed within 1,000 yards of Shawn Mendes or something?

10. Wrong host, wrong time. Sebastian Maniscalco is a hugely successful comedian who sells out multi-night runs at Madison Square Garden. He’s a big name. But his opening monologue — in which he snidely mocked trigger warnings and safe spaces and participation trophies and whatnot — felt like the sort of tired, these-kids-nowadays diatribe you’d expect from your least favorite uncle. It’s not that the bit was too edgy, or somehow hurtful, but that it was thuddingly predictable and utterly played out. The night quickly bloomed into a world-straddling three-hour pansexual fantasia of self-love and acceptance, which only made it clearer how out of his element Maniscalco was. He needed a safe space of his own.

VIDEO OF THE YEAR

Taylor Swift, “You Need to Calm Down”

ARTIST OF THE YEAR

SONG OF THE YEAR

PUSH ARTIST OF THE YEAR

The Chainsmokers, Bebe Rexha, “Call You Mine”

Panic! At The Disco, “High Hopes”

Taylor Swift, “You Need to Calm Down”

SONG OF THE SUMMER