Riverwest’s We Buy Records is new to the block, but owner Andy Noble isn’t

Riverwest’s We Buy Records is new to the block, but owner Andy Noble isn’t 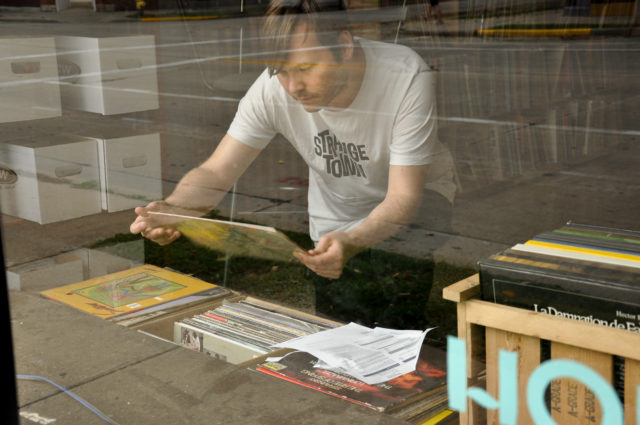 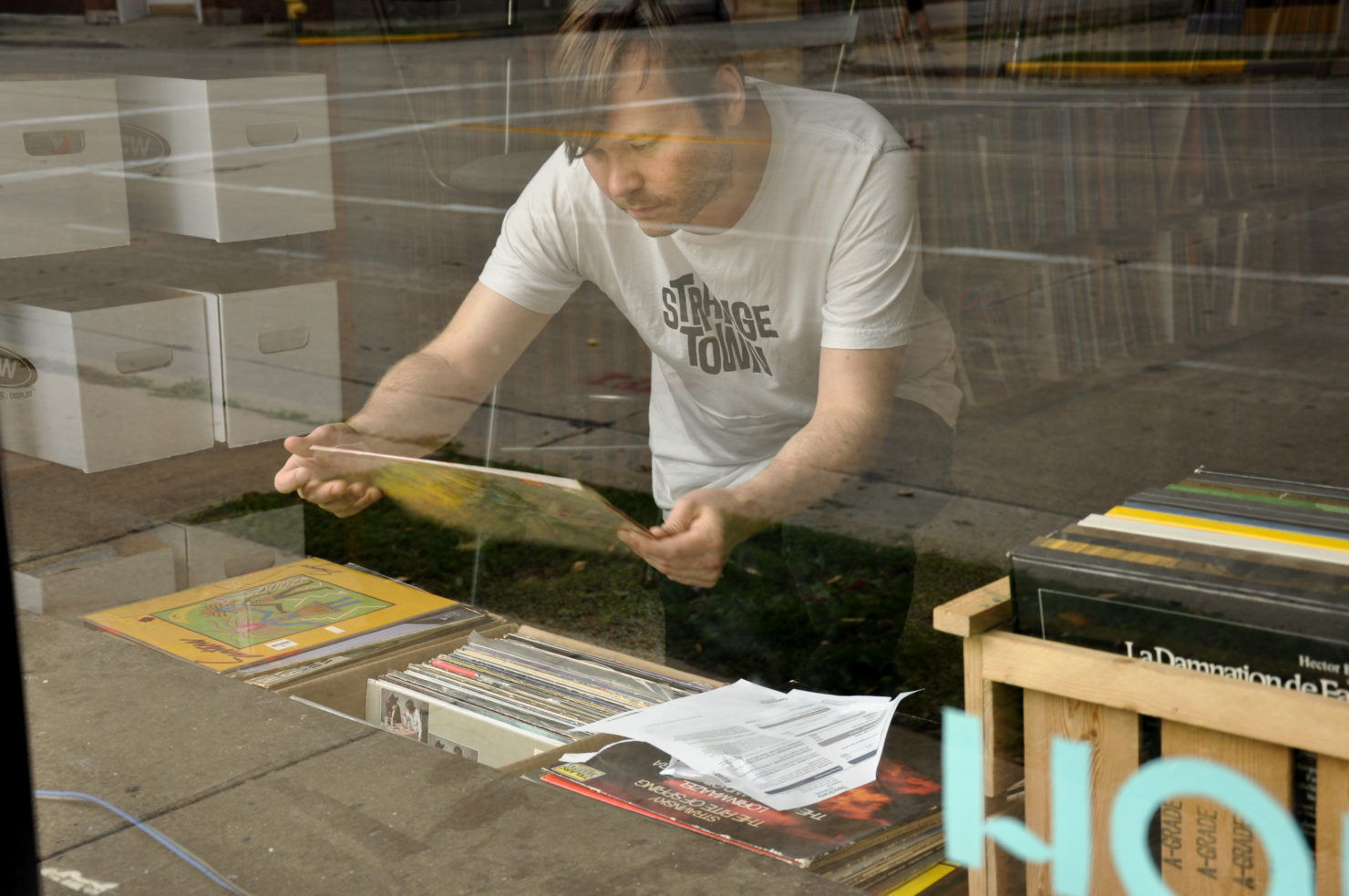 Andy Noble says, “Jumping into a store, again… It’s like a second marriage; why would you do it?”

It’s because We Buy Records is different, he says.

“Not that the first marriage was horrible, but we did a store in 2001-2009 and it was a certain kind of climate at the time.” Noble says. “We were pushing an agenda really hard and that’s what you do when you’re younger. We were already used to being poor, so we wanted to continue being poor, but with a record shop that pushed our agenda. So there was no capitalism in the beginning. We just wanted to have this shop that pushed genres of music we thought were under-represented.”

Since then, Andy Noble and friends have been pushing that agenda in various ways. Beyond the initial Lotus Land Records shop, they started The Get Down DJ nights in the fall of 2003 in Riverwest. The initial DJs—brothers Tom and Andy Noble, Brent Goodsell and Elliot Oliver—spun rare, small-label funk 45s as a weekly event. The rough self-production and cracks and pops of vinyl added a warmth to the Milwaukee music scene.

As Noble put it, back then “the classic, distorted syncopations of this hard funk resonated refreshingly to a crowd that had unwittingly become accustomed to the smooth house and techno, overproduced hip hop and so-called ‘Intelligent Dance Music’ of the late 90s.”

These days, you might know The Get Down crew more for their New Years Eve blow-out dance parties or second Saturdays at Mad Planet. While you still hear rare funk, the sound has expanded into soul, disco and even some Latin and African jams, while always staying true to music with the independent attitude of its earliest years.

A conversation with Andy Noble of The Get Down, Strange Town and We Buy Records in Riverwest

There’s a new record shop in Riverwest. With a red neon sign in the window announcing the store’s name—simply “We Buy Records”—owner Andy Noble opened its doors to Milwaukee in August as a continuation of years of vinyl-related business endeavors.

He is the longtime traveling record collector/trader behind the vinyl-spinning vegan restaurant Strange Town and the all-vinyl DJ event The Get Down, which is celebrating its 15th year in 2018.

We had a chat with Noble on opening a brick and mortar record shop for the second time and about his adventures in record buying road trips that took him into stranger’s homes around the country.

How did your record collecting change after Lotus Land closed?

I started to become a really serious collector of local stuff and underground funk and soul records. We started leaving the city for records in a very serious way around mid-late 2000’s.

Once we started to dabble in online sales, we started to make friends in the record world outside of the city and our own personal tastes were influenced by these other DJs and collectors from around the world. It started crystallizing what the actual hunt was about.

It wasn’t about finding a decent copy of a rare record or something like that, it became very clear the actual hunt was about independently produced, self-financed underground records.

It wasn’t about finding a decent copy of a rare record or something like that, it became very clear the actual hunt was about independently produced, self-financed underground records. Whether that was all the way back to the ’60s and ’70s for soul and funk 45s or the disco and early hip-hop era or into the indie rap era late ’90s/early 2000s, it was that same M.O. A band paid to press 500 copies and the only way to find them is find the band, find the manager, find the local shop that had all the consignment records. We started getting really heavy into going through the whole country, but our focus was in distribution hub cities. Jackson City was big, Western Louisiana like Lake Charles… 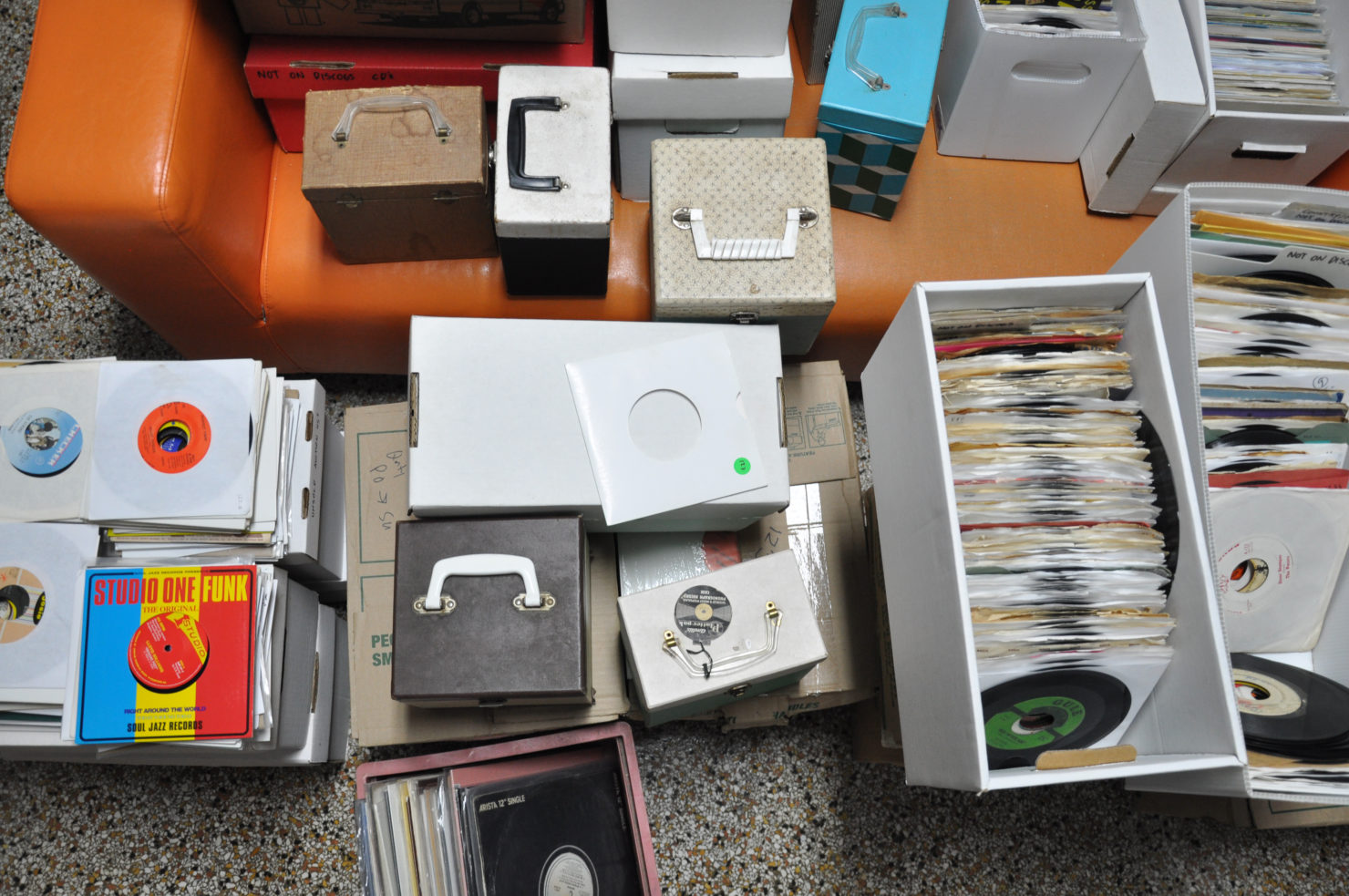 I was sending direct mail in a city a month in advance, then I’d drive in there one day and put up a bunch of signs in the neighborhoods I was interested in buying records from, crash in a motel and stay there for two weeks, three weeks, a month.

Sometimes I would do something I called my “rubber band” technique. I would stay in one city and then keep going. Once I got to the last city, I’d stay there as long as I could, then come back to the earlier cities. I would get calls from all the cities while I was in the trip. So by the time I came back to Milwaukee, I would have hit Louisville, Little Rock, Omaha, Tulsa, Oklahoma City, etc. I love mid-sizers. 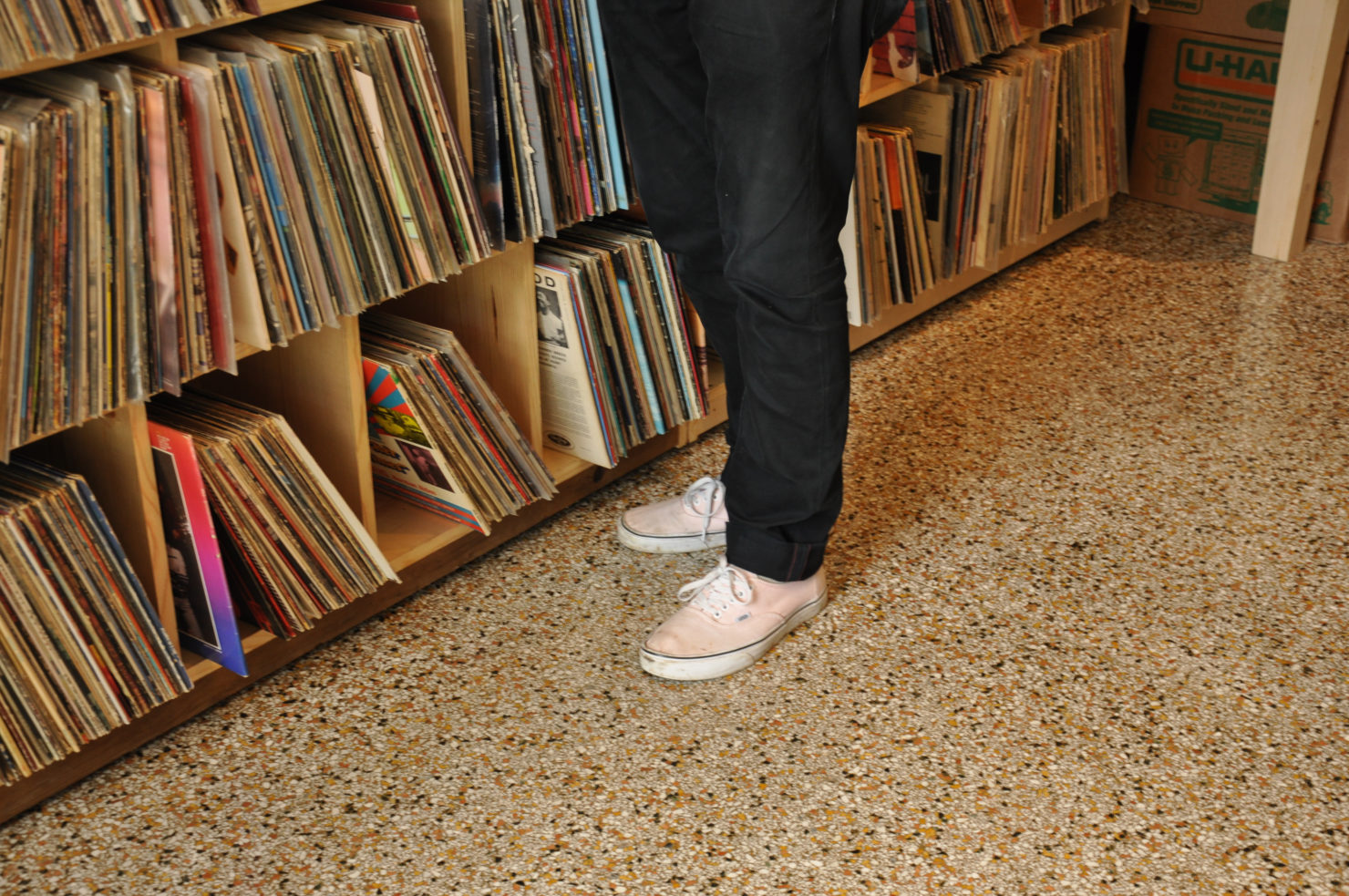 I would get to explore those towns on my own at night. Those were good chops to have. Alone, you get to know the cities really well. A weird side effect of that was getting really into parks. I needed public space in between appointments. Some days you would have really awkward timings for appointments far from where you’re staying, so you have to kill time a lot. So I got really into researching park histories and who designed them. Parks are amazing.

That was just a regular trip to my friend’s shop in New York, Good Records. That guy made it seem like I really cared about Arizona soul records or something, but he was missing the point. I care about small, independent releases with that kind of character. They’re inherently hard to find, pressed in small quantities, usually more rough around the edges and have more personality to them than large budget, major label music. He interpreted that as really specifically, “This guy is really into Arizona music.”

What kind of music is We Buy Records about?

This shop, as opposed to Lotus Land, is really practical. You go in and there’s Led Zeppelin records, there’s a huge Stevie Nicks section. I hope I’m not being too patronizing. The vinyl buying market is all this or all that. They either only want super rare hundred dollar records or they only want like Stevie Nicks records for two bucks. I have a handful of middle ground people, but that’s the rarest animal, and I want to cultivate more of those customers.

The game is still about buying.

We opened August 3, during Center Street Days. There were lines of people trying to sell us things before we even opened, so selling has been good. Buying has been okay—not fantastic, but not horrible. We still have online sales and we’ll stay afloat regardless. Buying has been awesome, though. Riverwest is one of three really culturally diverse neighborhoods, so what walks in off the street is inherently very diverse, which is fun. We’ll get punk and indie, right after that, soul and jazz. 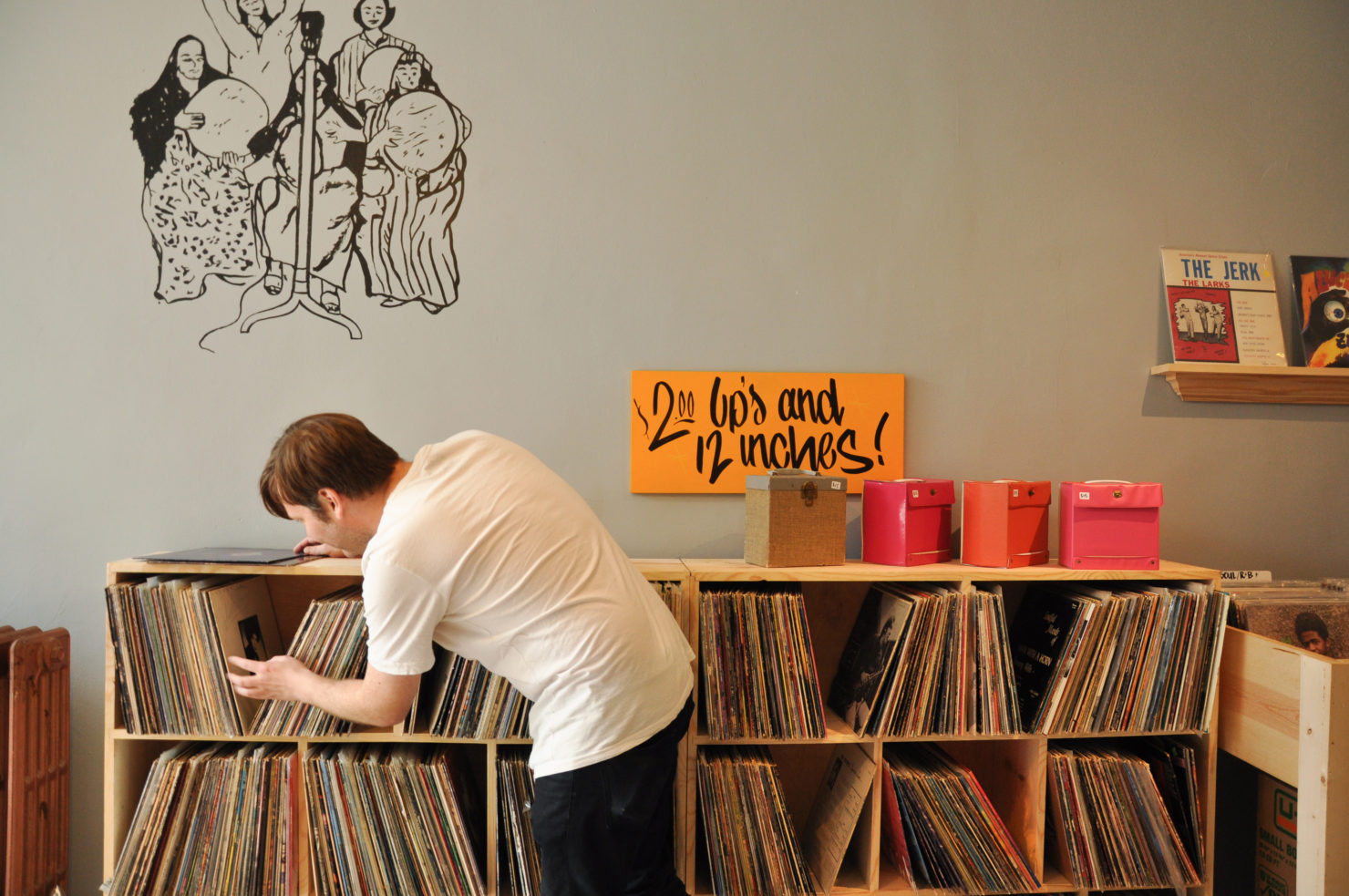 No. In fact, I have to push it in the ads now, “you know we also sell these f*ckers.” But the game is still about buying. This is the idea: we have a very modern, lovely business run out of a gorgeous back cottage in Riverwest, just beautiful. Because Ryan [King] just got this dream job and we’re just having a mellow, fun time. Then, because the restaurant opened up, I had a baby and basically my serious record buying adventures—me driving around the country buying, not selling—that kind of got curbed.

This store is really different. It’s really practical, as evidenced by the name. A woman called yesterday, “Oh. We Buy Records. That’s what the ad said, but you answered the phone and said that.”

Yeah, I’m a marketing genius [laughs]. I already owned a neon sign that said, “We Buy Records.” Plus, the store is like a record trap, which is what I’m trying to create. If you want to get artistic, you could say it’s the royal “we” – me, the customers, all of us. We hang out, we buy records. There’s that aspect, too. 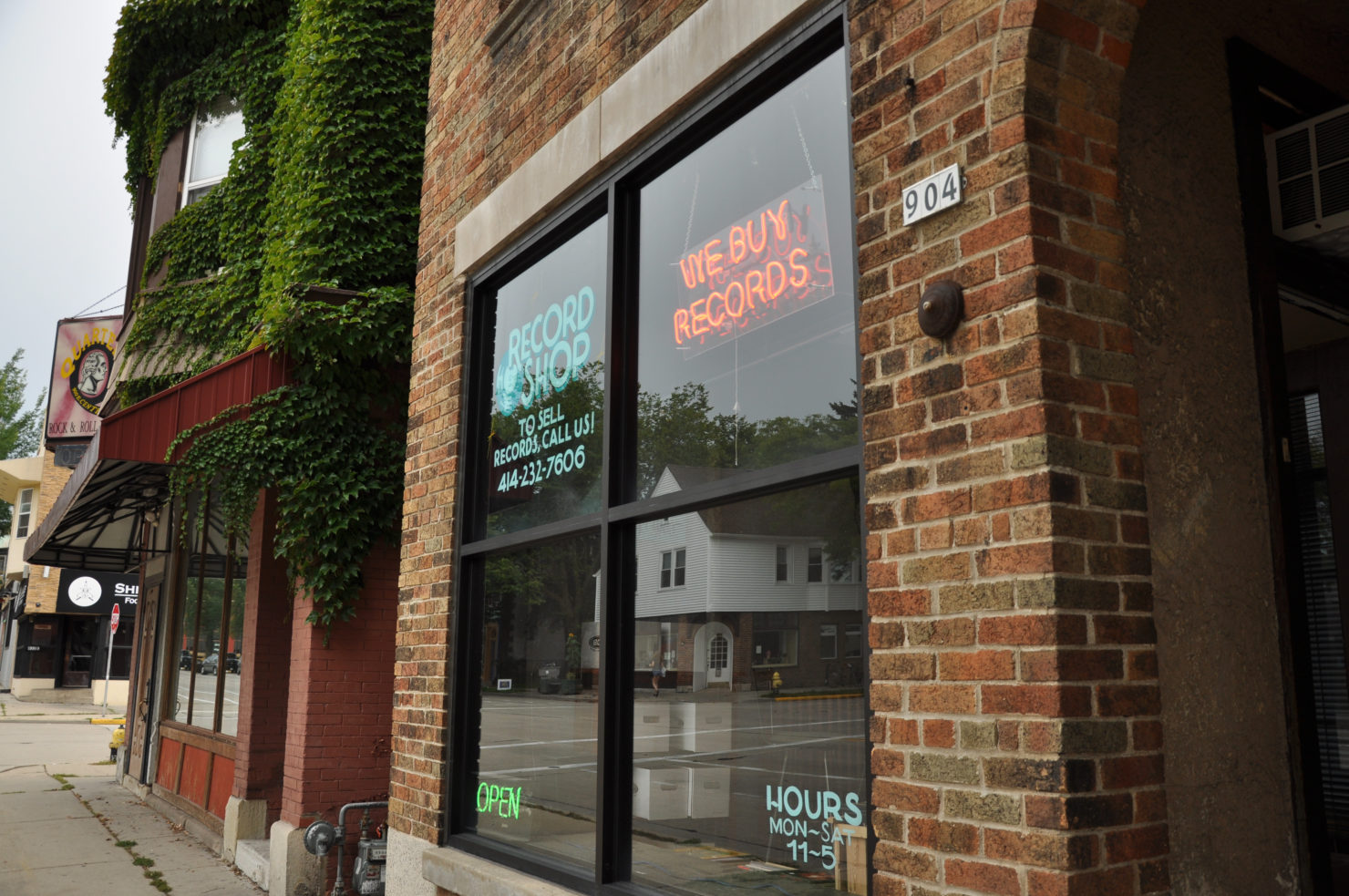 We Buy Records is located at 904 E Center Street.