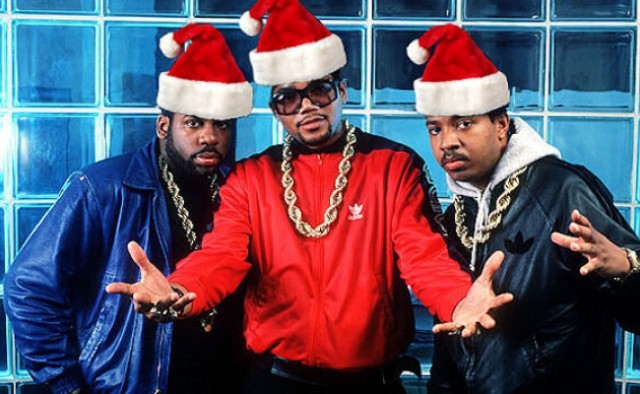 The holidays crept up on me this year. As I write this it’s 43 degrees and raining. Certainly it doesn’t look like the holidays, and doesn’t feel like them either. Usually I would be sick of holiday songs right now, but instead, I’ve felt an absence of holiday spirit entirely.

To remedy that I have put together a list. And I’ve checked it twice. It’s full of holiday songs I genuinely love. They’re guaranteed to get you in holiday spirit.

Hear all 5 Holiday Songs We Can’t Stop Listening To:

Kurtis Blow’s “Christmas Rappin’” is this weird novelty song that is kind of responsible for launching hip-hop as a genre. Until it was released in 1979, hip/hop was a sub-culture limited to just a couple of boroughs in New York City. The artists and producers making hip-hop knew that they needed major label support if they wanted to make any impact outside of New York City. (This was the late 70’s; there was no internet. You couldn’t make it without major label support.)

So, Kurtis Blow’s producers knew if they released a Christmas song, there would be less of a barrier to entry for major label support. So they cut “Christmas Rappin’” and sent it to tons of labels.

After many many rejections, Mercury Records decided to take a chance on hip-hop. They signed Blow to a two song deal, with the condition that Blow would only get an album deal if both songs were hits. The fate of hip-hop rested on this Christmas Song.

And it was a huge success. “Christmas Rappin’” was a hit. A hit for Kurtis Blow, a hit for Mercury Records, and a hit for hip-hop. And the second single, “The Breaks” became the first certified gold hip-hop record — ever. Kurtis Blow became the first hip-hop artist to get an album deal from a major label. And hip-hop broke out of New York and across the country. And that’s how a Christmas song saved hip-hop.

On paper hip-hop and Christmas should not add up. If hip-hop is about keeping it real, then rapping about a portly bearded man shimmying down chimneys and traveling around the world in one night is kind of off the mark. And I think that’s why I love it so much. There is this absurdist element to Christmas raps, a lowering of the guard in the name of Christmas spirit that I find endearing.

This song “Christmas in Hollis” was released by Run-DMC in 1987, at the peak of the band’s popularity. And at the peak of hip-hop’s “golden age,” when keeping it real was the genre’s manta. And “Christmas in Hollis” is real. DMC is saying, “I ain’t no sucka MC, but I am gonna get together with my family on Christmas eve, eat some of my mom’s home cooking, and bust some Christmas carols.” That’s keeping it real on Christmas.

3. Tom Waits – ‘Christmas Card From A Hooker In Minneapolis’

I feel Tom Waits is a polarizing character.  Love him or hate him. I love him. Tom Waits is my favorite artist of all time. I say that with confidence. The man is a storyteller. And I respect that.

First off, this song is written from the point of view of a woman. Tom is the female character in this song. Who does that? No one? Tom Waits does that. And that’s why I love him.

This song is a beautiful and tragic story. It’s in the form of a Christmas card just catching up. It’s written to Charlie, filling him in on lost time. It start with good news. She stopped taking dope and quit drinking whiskey, she’s pregnant and her old man takes her out dancing every Saturday night, and he loves her. They’re getting engaged.

And it reaches this peak. But then, things start going downhill. Someone stole her record player, she had to go back to Omaha and live with her folks. Things get even worse. She wishes she had all the money they used to spend on dope. Then she finally comes out with it. She breaks down: “Charlie, if you wanna know the truth of it, I don’t have a husband, he don’t play the trombone.”

She’s in prison, she needs to borrow money. It was all a lie. And she’s sending this letter to him, some old client, cause she’s got no one else. But she does have good news — she’ll be eligible for parole come Valentines day.

Merry Christmas. This joint that I got eyes to spin is the most swingin’ Christmas diddy that a cat ever laid down. It’s “Be-Bob Santa Claus,” or, if some squares are on it “’Twas the Night Before Christmas,” turned to the language of hip by Babs Gonzales.

Now, Babs has got the chops to jive talk, bop, scat, or riff on a page of the old script. He ain’t no freak, fink, or fuzz. He’s not looking to put you on. He’s cool. Babs paid his dues. He invented jive. He swung with blowers in the scene like Dizzy, The Prez, and Bird round the Big Apple in ’45. Workin’ as a barker, confidence man, and part-time hustler, the cat never made a lotta bread. But the man had a loose wig, and the bad jazz that cat blew has lasted long after he was cut out. To this day hepcats and hipsters pick up on his miracle licks, ya dig?

The holidays are a time for traditions and rituals — two things we all crave. It doesn’t matter what you believe in or don’t believe in, we can all join in this special unity. And it just feels good to know we are all doing the same thing at the same time. We have rituals that go along with the traditions. One of my family’s is a Christmas movie marathon. The movie that I look forward to most every year: “A Charlie Brown Christmas.”

Released in 1965 as an animated TV Special, “A Charlie Brown Christmas” follows Charlie Brown, who is feeling sad while everyone around him seems to be having so much fun. He doesn’t understand and he continues to be sad until he finds real meaning. Every time I hear this song I’m reminded of my own traditions and rituals like the movie marathon. That gives the season meaning for me, and in turn, makes me happy.