5 Songs We Can’t Stop Listening To with BØRNS

5 Songs We Can’t Stop Listening To with BØRNS 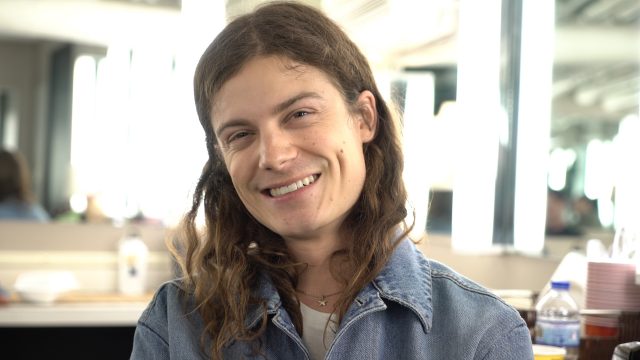 With music from The Mamas & the Papas, Kari Faux, Radiohead, LVL UP, and Jonwayne

1. BØRNS picks “Look Though My Window” by the Mamas & the Papas

Every week we ask one artist that we love to tell us about one song that they love. This week we are here with BØRNS.

Justin Barney: Garrett Borns, what is one song you can’t stop listening to?

BØRNS: There’s a Mama’s & the Papas record, and there’s this one song,

Yeah, it’s very calming. All these songs could almost be like souped up lullabies. They always start off like, *Starts singing again* and it’s just like a lullaby and then all of a sudded it’s like DA-DAAA-DAAA-DAAA-DAAAAAAAA. And you’re like ‘Oh sh*t, I was just falling asleep, but, okay, guess everyone’s here to party.”

The song “Black Coffee” by Peggy Lee is one of my favorites. It’s so cool. Recorded in 1956 when jazz was at its coolest. But it’s got these lyrics that are not so cool, “A woman’s born to weep and fret. To stay at home and tend her oven. And drown her past regrets in coffee and cigarettes.” In this song she’s some man’s fantasy. At home all day, waiting for him to come home. But she is miserable, and bored.

Kari Faux new song is “Black Coffee” in 2016, musically, but lyrically she turns the song on its head. She’s no man’s fantasy and she never plans to be.

This week we have TWO of our favorite artists telling us about music they love. Here we ask Adia Victoria.

Justin Barney: Adia Victoria, what is one song you can’t stop listening to?

Adia Vicoria: I am a huge Radiohead fan and I’ve gone back and listened to “Amnesiac” and the one song I really can’t stop listening to is “Dollars and Cents.”

Adia Victoria: I think just getting into the music industry. Monetizing your art can have really harrowing effects on the artist. Unless it’s just your thing. But I feel like it’s a really cautionary tale by Thom Yorke about “Hey man! This stuff is real!” So he’s like my big brother.

Justin Barney: What are some difficulties you’ve had with that?

Adia Victoria:  I mean, as a woman people think they can take the liberty of telling you like, “Hey you should look this way. You should wear this or wear that. And I had some issues with a certain person on my team, who is no longer on my team, who thought that they had the right to tell me what to wear on stage. And I was like, “We now have a huge problem between us.” So I think for me any time someone comes and tells me how to appeal to more people I’m just like, “Ya gotta get out of here. You gotta go.”

Adia Victoria: Right, well you give up so much control when you allow people to start playing those games with you because your sense of value and worth is predicated upon other people approving of you. So that’s a very dangerous game for me personally and I can’t do it. I will refuse. If it comes down to that I will just go back to my regular life in Nashville and “This was fun, okay bye.”

What is the guitar solo in 2016? I think that guitar solos can be cheesy and self-gratifying. I’ve never really been into them, until recently. I’ve found myself loving them. I think it’s because guitars are no longer ubiquitous and guitar solos aren’t the end-all-be-all in music. Nor are they shows of technical perfection. Pay attention to the guitar solos in this song. They are super loose and kind of lazy. It’s a comma, not an exclamation point. They are there to remind you that they are fun and they add to the understanding of the message of the song.

Justin Barney: I’m here with our intern Eddie, AKA Fast Eddie. Eddie you have been haranguing me about playing one artist and a song in particular. Could you tell me what is the song and artist you can’t stop listening to?

Eddie: First of all the artist is Jonwayne. And the song that I really want to listen to is “Wonka”

Eddie: So basically the little history is that Jonwayne was allegedly retired. He put out an album saying that Jonwayne is retired so he hadn’t talked to anyone in like two years, and then all of a sudden he comes out of nowhere at the beginning of the summer with “Wonka” which is the single. And “Wonka” is basically an ode to the new Jonwayne, and kind of a scathing review of everyone who doubted him. It’s like a diss-track but in like a really powerful way.

Eddie: It’s an affirmative diss-track, but in his own manner. He did an interview right before he dipped out on the public and he was like, “I hate rap. I hate hip-hop. I’m not rap. I’m not hip-hop. I’m my own person. I’m a musician and I don’t care about what you want to say about me. I’m here doing this self-gratifying level of music, and if you’re gonna disrespect me for being a hip-hop artist I don’t care because I’m not a hip-hop artist. I’m a musician.”

And I love that.