5 Songs We Can’t Stop Listening To with Polica

5 Songs We Can’t Stop Listening To with Polica 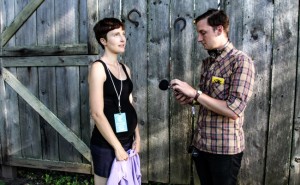 Every week we ask an artist that we love to tell us about a song that they can’t stop listening to. This week we caught up with Polica. This is what Channy Leaneagh said.

Polica: I’ll do Michael Jackson, just because at our house right now there is a general obsession with him, headed by my daughter. She just discovered him so it’s like “Billie Jean” on repeat all day and all night.

Justin Barney: How old is your daughter?

Polica: She’s six. So it’s like her first musical discovery and she’s on a rampage.  I try to show her like Beyonce, Janet, Whitney…It’s okay but she’s just not that interested. And I’m like, “Wow” she’s just so specific.

JB: Did you introduce her to him?

Polica: Actually my mom did. Which is pretty hilarious. Like all of her people, her dad, me, her step-dad, all musicians, not really killin’ it on introducing her to anything. It was her grandma.

JB:  That’s good. That means that you are a good parent. It seems like you are trying to get her to lash out at your own authority. *laughs*

Polica:  Yeah, she will probably rebel with really horrible music taste. But yeah, I very much condone Michael Jackson, he is one of the best.

This is the thing that everyone is looking for. She’s found it. The person that takes care of her. Makes her feel special. The person that makes her feel like she is the only one. So many songs, and songs that I love, are about not finding that person. They are about being heartbroken and lonely. Que any Tom Waits song that I listen to continuously.  So many people don’t find that person.

And here, she’s got it. She’s happy. And you can hear it. It’s not “I’m Happy” happiness. It’s no jump for joy. It’s relief. It’s a kind of wistful happiness. The search is over. She has found happiness.

For an artist, one clothing item can become a signature. Think of John Lennon’s round glasses, or Lester Young’s porkpie hat. Some of them, the best items, even get their own songs, like Carl Perkins’ “Blue Suade Shoes”, Leonard Cohen’s “Famous Blue Raincoat” and Run D.M.C.’s laceless Adidas.

This song is an ode to Brittney Howard’s leather jacket.

If this song were a scene in a movie it would be woman walking in slow motion in a brown fur coat. Black sunglasses. A march to the sea. The shot is at a low angle, slightly to the right, making her presence large and her strides powerful. Wind blows through her hair. She’s looking past the camera. Focused.

As the harpsichord plucks  and the chorus kicks in it cuts between her and shots of the sea. Waves crashing. Storm like. Cut ack to her, getting into a boat that is far too small for the huge waves. She’s either incredibly brave, or just plain crazy.

The whistle solo comes in. The boat is crashing on the waves, but continues to go farther and farther out to sea as the camera pulls back. The final sax solo comes in and she’s on the horizon. Will she make it? The camera pans up towards the sky.

*Horrible dial up sound plays* That is the sound of Windows 95. In this song, Molly Nilsson says that Windows 95 is a metaphor of how she feels inside. What a great metaphor, Windows 95 was something different to everyone and changed through time. Looking back it was slow, difficult, and primitive. But at the time it was a world of opportunity. Where the World Wide Web was not endless and overwhelming, it came on a disc in the mail. It was the beginning. Anything was possible. So, for couple minutes here, let’s go back to 1995.