5 Songs We Can’t Stop Listening To with San Fermin

5 Songs We Can’t Stop Listening To with San Fermin 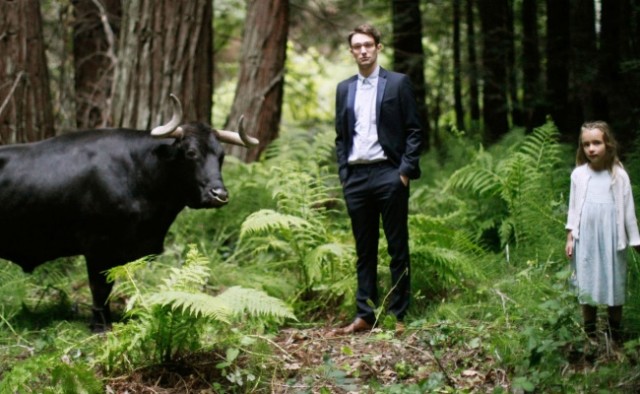 Hear all 5 Songs We Can’t Stop Listening To here:

: There’s a song by Sam Amidon called Wedding Dress. He actually just toured with us on our tour of the East coast and it’s just a gorgeous song and it has really great arrangement by Nico Muhly. Every time he would perform it live I always just had the feeling like, “Maybe it would be kind of cool to get married,” which is such a crazy thought that I would never have. He’s just such a great performer you know?

Justin Barney: What about it made you want to get married?

Ellis Ludwig-Leone: There’s something very pure about the sentiment and I think it’s just about a women who is sewing a wedding dress. But there’s something really just focused and beautiful about the one image of this women and the arrangement has this sort of different feeling to it all together. It almost feels disconnected from the song in an interesting way.

Ellis Ludwig-Leone: It sounds like an octopus is getting married.  *laughs*

2. Frankie Cosmos – “Outside with the Cuties”

Sometimes there are just artists that have your number. And Frankie Cosmos has mine. Her songs are so sweet and innocent. You get the sense that she’s just an art kid, playing around with the colors and seeing what comes out. It’s so raw and open. And it’s hard to be honest and open without coming off as something else. The hardest thing to do in art is to pretend that no one is watching when you know that everyone is watching. But listening to Franking Cosmos is an act of musical voyeurism. When you’re listening to Frankie Cosmos your getting Frankie Cosmos. Warts and all.

Have you ever gotten exactly what you wanted but that thing just wasn’t what you thought it was going to be? I feel like I do that with things I buy all the time. Where I’m like “If I just buy this one thing then I’ll be happy.” Then you save up money, work overtime, and you finally get that thing and it makes you so much less happy than you thought it was gong to be.

That happens to Eleanor Friedberger in this song, except that it’s in a relationship. At one point she says, “I so wanted something to happen that day. And then what I wanted, it happened, and that just don’t always happen that way to me.”

Ken Sumka hosts afternoons at 88Nine. We sat down to talk music.

Ken Sumka: I’m going to sound bitter but it’s a song that I brought to a couple of music meetings and it got shut down.

Justin: Happens to me all the time.

Ken: I know, it happens to all of us. The way the music meeting basically works is we all bring in two songs. We listen to the first minute and a half/two minutes of each song and we vote. And we all bring in stuff and everyone gets stuff shut down, it’s not like anyone has a perfect batting average with this stuff. But this is one where I’m just like, “God this is like a homerun for us”, it’s The Go! Team, “The Scene Between”, and it had been a while since they put out a record and I’ve just always loved their stuff. And I know that in the past we played them once or twice. So again, it seemed like we had a history with them, it was a homerun song and it just felt right.

Ken: I think it’s just like the perfect pop song. It kind of hits all of the notes. There’s electronic elements, there’s sample elements, and it just seemed like the whole enchilada you know? It’s just like the perfect meal in a song. There’s songs I brought in where in where it’s like, “Uh, yeah no I’m not feeling it,” or once in a while you bring in a song that someone gives you and you just want to play it for the meeting just to say, “Hey I brought this to a meeting” and we wish it farewell. This is one where I’m like, “This is a no-brainer,” “This is a home run,” and it just didn’t happen.

This is where music comes together and makes a difference in our community. Christopher Porterfield is a musician who lives here in Milwaukee and who also has recognition, tours the country, and is on the radar of Pitchfork, Consequence of sound, and all your other music news outlets.

Chris also has a neighbor, a young, happy, wonderful kid named Tia, who has sickle cell anemia and needs some help.

Chris found himself in this weird position here he could help in a real way. So he wrote this song about Tia. He also got together with local guys Daniel Holter and Justin Perkins to mix and master the track, and artist Dwellephant to make some great album artwork. They made this song, which is available on bandcamp, and all of the proceeds go right to Tia and her family.