The funny story of how Future Islands named their new record

The funny story of how Future Islands named their new record 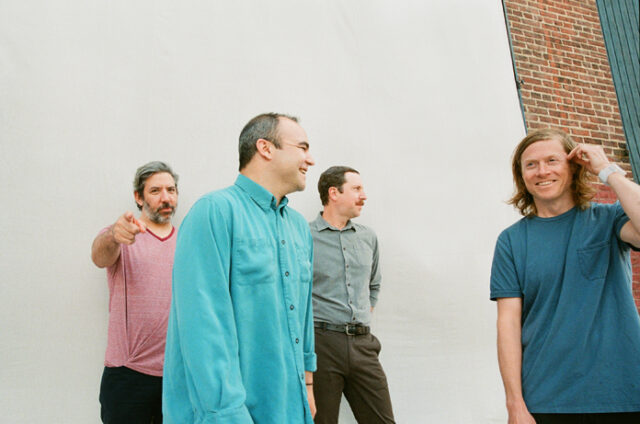 In a very famous performance on “The Late Show with David Letterman,” Future Islands danced into our consciousness. Aside from his dance moves, I have always loved lead singer Sam Herring’s voice. It bellows and resonates, and yet, he can use it with so much softness.

I remember when they did a session at 88Nine back in, I think, 2014. I was an intern at the time, tasked with bringing in the bands gear. I met Sam in the middle of the parking lot and he lurched, “Hi, I’m Sam Herring” in a voice that sounded comically low. In the parking lot he talked about smoking his first cigarette at 13, after stealing one of his dad’s. How he felt the shame of it and flushed it down the toilet. Then about Karen Dalton’s version of “Reason to Believe” how she wants to believe him, but he lied to her face as she cried.

That kind of muscly tenderness is present in their music too. And they have a new album coming out called, “As Long As You Are” which shares a similar journey of something earnestly soft sharing a series of failures before ultimately becoming the albums central message.

Listen to the unedited version below, and the abridged interview as well.

“As Long As You Are,” is the new album. Why did you choose this title?

Sam Herring: The funny thing about that was, it was the name of a song that Gerrit wrote in 2015. I can’t remember if it was there for “Singles,” but it was talked about for “The Far Field,” and then it came into the picture for “As Long As You Are.” It didn’t make the cut. So I think it’s dead. I think the song is finally dead, even though it has this ripper guitar line. When we were talking about album titles, “As Long As You Are,” was one that got thrown into the mix. It was just something we kept coming back to. Then for a time, we talked about calling the album “Alaya” as an acronym for “As Long As You Are,” but then we just decided to go back to the original, full title. To me, it just invoked something. It’s like, as long as you are… what? Is it as long as we’re stuck in our houses? As long as we’re in this situation? I kinda liked that vagueness and that broadness.

Gerrit, what did it mean to you as the purveyor of this idea?

Gerrit: I think at the time it was about love and trust for my then girlfriend now, wife. We had just gone through the proposal and it was very important, “As long as you are.”

I love how that idea has boomeranged. What a little poetic journey for that song. So you have two songs out right now, “For Sure,” and “Thrill.” What is “Thrill” really about?

Sam: When I was writing it, I was feeling isolated and kind of alone at the time in Sweden, away from the guys. It made me think about the old days and Greenville, North Carolina, and how I kind of self isolated in those days through drug addiction and alcoholism. I was just a kid, not really realizing what I was doing. Unfortunately a lot of people take that into their adult lives. I was able to leave a lot of those things behind, but the fact is that isolation was what I was feeling and I was reflecting on it. So that song is really about feeling the way a lot of people probably do isolated in societies– not feeling understood and drinking themselves into oblivion. It’s reflective of our college days. Greenville, North Carolina, as a setting, is like a swamp in a lot of ways. It’s easy to get lost there.

William, what has COVID meant for the band, especially as we realize that everything’s not going to be back right now? I don’t know if you had this release date set for a long time, but you were probably like, “Hey, we’ll release it now we’ll go on tour.” What does COVID mean for how the band looks?

William: We were always planning to release the record, best case scenario, September of this year. The pandemic hit while we were supposed to mix the album. So we actually mixed the entire record via zoom with our co-producer Steve who’s here in Baltimore. Even though we were all within like five or six miles of each other, we had to meet on the computer to mix, which is actually not as bad as it sounds. I think it gave us the space to really think about the sounds and about what we wanted to say about the sounds. That time might have quelled some fights.

When the pandemic hit, we were like, okay, so it’ll be over by the Fall for sure. Like the album comes out, and we’ll tour. Then, we realized our tour wasn’t going to happen. So the thought came up, should we push the album back? But it was important to us to go ahead and get it out. We want to get it out into the world. For touring, I don’t think any of us are getting our hopes up at this point. We’re actually starting to write again, and wondering if we want to start writing the next album.

Sam, I heard from Milo (R.A.P. Ferreira,) who has a lot of Milwaukee ties and is a friend of the station and a friend of both of us personally. In Maine, he mentioned your name and said “I’ve been talking to Sam about doing a thing.” What is your involvement in Maine if there is any?

Sam: I don’t know if he was just talking about doing one of his record release shows at his record store, Soulfolks Records.  He did a number of grand opening shows and special performances. I know Kenny Segal played up there. Maybe even Nostrum Grocers played with him. I was talking to him about doing a show. He put out my record last year — my rap record with Kenny Segal. Rory’s been a friend since 2014. He reached out through Twitter and basically was like, “Hey, I heard you rap.” I checked out his stuff and was like “Yo, this kid is really, really dope.” So I wrote him back. We connected through the internet on the song “Souvenir” on “So the Flies Don’t Come,” and that’s how I connected with Kenny Segal and started a musical friendship. Rory has been a friend, and it’s really cool to me because we are maybe eight years apart. I think in a lot of ways we have the same influences as writers.