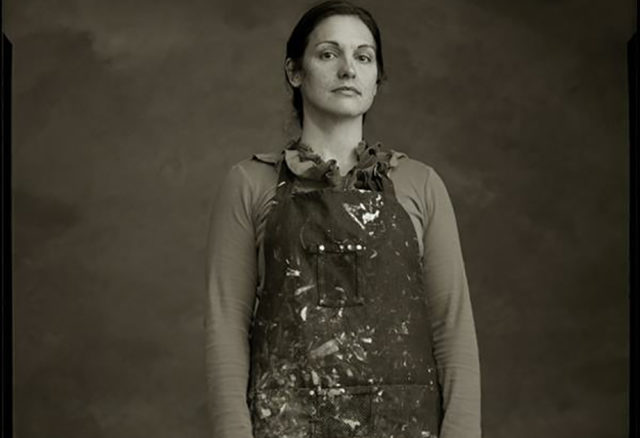 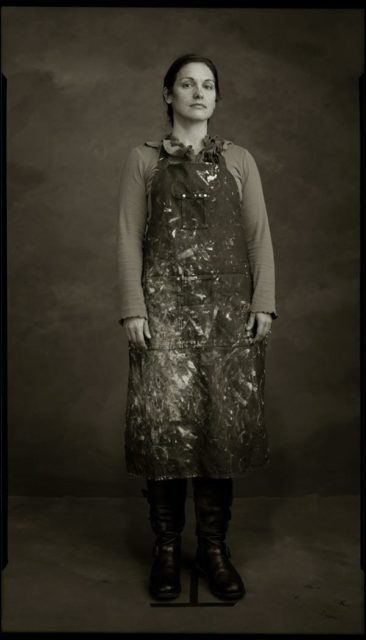 Meet Stacey Williams-Ng, the artist behind one of the two Milwaukee-area murals commissioned by 88Nine. A lifelong artist, learn how she transitioned from traditional studio art to the performance of chalk and mural work. Williams-Ng helped produce the Black Cat Alley project, which opened the door to many more recent mural works you can see popping up around the city now.

Artist: Stacey Williams-Ng
Location: Penfield Children’s Center, 833 N. 26th Street
Mural start date: July 31
Anticipated mural completion: September 10
Concept: Stacey’s concept plays on themes of rhythm, community and cohesion. It recognizes that music brings us all together and that differences disappear when we bind together as a community.

Read below to learn more about Stacey Williams-Ng and her vision for creating and stewarding mural art in Milwaukee:

1. Where you born with a crayon in your hand?

Oh, absolutely. I really was. It’s interesting, I was an adopted child and my parents were really supportive and when they saw I had artistic talent, they really encouraged it. But they themselves did not have any artistic interest or inclination. I always thought it was a skill thing; if you do something a lot of course you get good at it. There is not such thing as inheriting talent. Then, I met my biological family and they are all creative. It blew my mind. On both sides of the family there’s creativity and making, which warmed my heart a lot.

I took art classes my whole life. Saturday classes for kids, craft classes, it was nonstop. Pre-college programs when I was in high school; any time they could sign me up.

2. Are you from Milwaukee? Where did you grow up?

We were living in Chicago and my husband got a job with Kohler. We didn’t like the idea of living so far north, Sheboygan wasn’t urban enough for my taste, so we moved north of Milwaukee so he could commute to Kohler and I could be near Milwaukee.

3. When did you start doing mural work?

I started doing chalk art about a decade ago, soon after I moved to Milwaukee. I ended up doing chalk art, but it was always out of town. I was getting invited to places. I always liked to paint big and somehow got roped into a chalk art thing at one point and though, “Oh, I really like this!” I started looking for the chalk festivals and I got invited as a commissioned artist to Sarasota, Florida; Marietta, Georgia.

I hadn’t even done mural work at that point, I was taking my studio practice, and my children’s book illustration ability and saying, “I could do this really big at your festival.” Then it all washes away. I still really love doing that.

Sarasota in particular, is one of the ones I like to go to regularly because it’s the largest chalk festival in the United States. Sarasota does half chalk and half vertical. By vertical, it means permanent murals. I was kind of jealous of the mural artists. “Wow, they are doing the same thing we’re doing, but the city is going to keep their paintings. Oh, okay, we’ll do chalk and it gets washed away afterwards.”

I was asking a lot of questions of the mural artists because at that point, I’m talking 2006/2007, other than the ethnic murals we have in Milwaukee, ten years ago you just didn’t see contemporary art going up on the side of a building. I was thinking, “This is amazing, I wish we had this in the Midwest.”

I would come back and say this to other painters in Milwaukee and they’d say, “Eh. In the Midwest people don’t really go for that, it’s considered graffiti, you’re never going to get permission to do it.” At that time it was kind of a doom and gloom message from other artists. “That kind of thing doesn’t happen around here, you can forget about it.” And I kind of agreed with them because that’s the assumption, if it’s not happening, you think nobody wants it.

In 2015, my friend Tim Decker, a professor at UWM, teaches animation and he does some of these chalk festivals, too. He said, “You know, we should do something like this in Milwaukee.” I was like, “I know!” He said, “Let’s do murals. I want to do murals all down this alley near the Kenilworth campus.” That’s how Black Cat Alley was born.

Ten years ago you just didn’t see contemporary art going up on the side of a building. I was thinking, 'This is amazing, I wish we had this in the Midwest.' 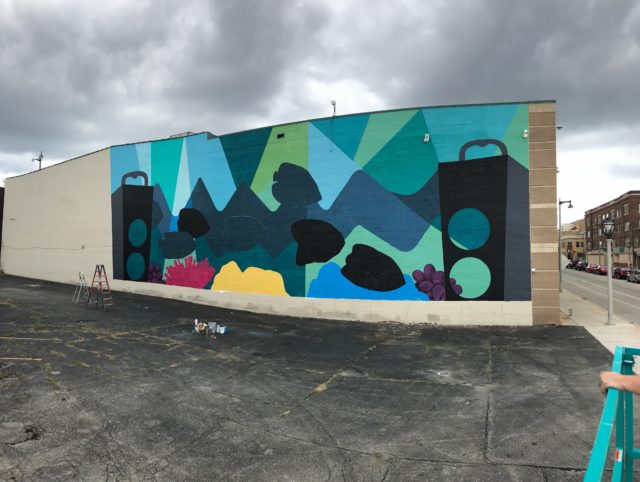 Progress photo of mural for Radio Milwaukee by Stacey Williams-Ng

4. I love when a building is knocked down and you see old painted advertising from decades ago. Do you ever think about your work having a life, living on?

Not at all, I kind of wish the opposite. I’m really fond of ghost signs, and I just did the Pabst logo on the side of their building; they wanted something that looked like an old-timey sign. I really respect that tradition, but I think a lot of the murals we’re doing really should be thought of in a more temporary way.

I think there is a difference between the community and ethnic murals that you see in historically Latino and African-American communities that are really meant to proclaim the history of that neighborhood or proclaim the nature of the people who live there. To me, that’s the kind of mural that should live on forever and ever and ever, because it’s more about legacy.

I think the murals we’re doing in Black Cat Alley are more about today’s issues, today’s politics, what’s happening right now. I think they should change up. I think it would be more fun to paint right over them and do something relevant to the year 2020 when it comes around. Otherwise, we’ll still be looking at the old 2016 stuff which will be a little tired by then, I think.

5. What are the logistics to put up a mural? I assume you need permissions, licenses…

It can be a little tricky. You could have a fourth party involved, the city. Who says you need to pull a sign permit, or, “you are not allowed this kind of content in this neighborhood, city or village.”

That was something I wanted to learn about from the get-go. That turned out to be the reason we weren’t seeing murals in Milwaukee. It wasn’t that Midwesterners don’t want them, because once we overcame those obstacles, did our research, made Black Cat Alley happen, four thousand people came to the opening in this little, tiny dark alley. Ever since last year when Black Cat Alley was released, I’ve been getting phone calls nonstop, because my phone number is the one listed on the Black Cat Alley website.

Building owners have been calling me, other neighborhood BIDs like Bay View have been calling to ask, “How do we do this in our neighborhood, how do we do this on our building?” So, I have to say, I think Black Cat Alley was a big catalyst because my life changed afterwards, my phone has been ringing off the hook and I’ve been seeing murals that don’t necessarily involve me, Tia Richardson is doing one, down on Clark Square they are doing one. I just think everyone caught mural fever the last couple of years.

Right, like, “This can’t be hard.” Suddenly, it didn’t seem impossible anymore.

More information about the 88Nine mural project can be found HERE.
For more information on the artist Stacey Williams-Ng, visit: http://staceywilliamsng.com/