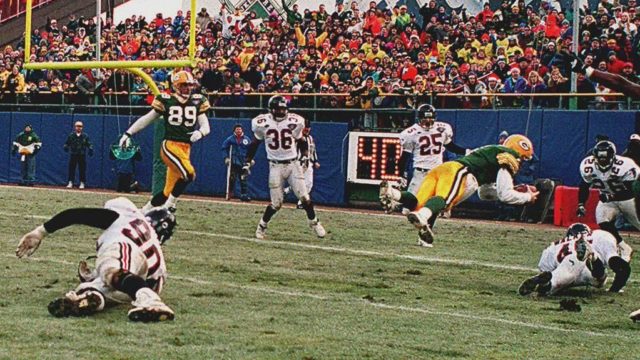 The Green Bay Packers are a team whose hometown is as integral to their identity as their historic players. Not only has the team played in their city of origin longer than any other team in the NFL (since 1919) and earned the relatively small town the nickname of “Titletown,” but the intimate, home-grown nature even informs how the team operates through literally being owned by the fans.

And then there is Lambeau Field itself. Akin to the team’s longevity, the venue is the oldest continually operating NFL stadium today and notoriously difficult for visiting teams to win in — the Packers have won nearly twice as many games as they have lost there. However, while the Packers have called Lambeau home since 1957, there was a time where Milwaukee was just as much a “home” to the green and gold as it was their namesake city.

From 1933-1994, the Packers played a growing percentage of their home games in Milwaukee in order to help build a larger fan base across Wisconsin and just make enough profit to even stay alive. And I know what you may be thinking: to many Milwaukeeans, this isn’t some shocking revelation; I mean, it was a period of 61 years for a team which as mentioned earlier, weaves its history into its identity.

But for an increasing number of fans (including myself), they’ve never known a Packers team who played their home games anywhere but Lambeau Field. I was genuinely shocked to learn that the Packers played here and I’ve been watching the team for as long as I can remember.

But what took me even more by surprise was that the Pack spent more than half of their years in Milwaukee playing in the old Milwaukee County Stadium. In other words, where the Milwaukee Braves (and later Brewers) used to play before Miller Park was built adjacent.

Primarily built as a baseball stadium, the grounds were also meant to attract the Packers to Milwaukee full-time and is actually what forced the city of Green Bay to build Lambeau Field to stop the NFL from moving the team to the Cream City for good in 1955. To further complicate County Stadium’s legacy within the greater Packer mythos, a majority of the years spent there are ones which the team would like you to forget. I like to call it the “Dark Ages” as Bart Starr retired and the world waited for Brett Favre to emerge — having only five winning seasons between 1968 and 1991.

Even the team’s stadium retrospective on their site right now celebrating 100 seasons relegates County Stadium’s legacy to a measly three sentences without mention of the 126 regular season games they played there, or the Western Conference Championship they won there in 1967 before the Ice Bowl.

To make matters even worse, it’s generally understood that County Stadium was an incredibly lousy place to watch or play professional football due to the field barely even fitting in the park, the teams sharing one sideline and plenty of obstructed viewpoints.

And yet, while I never attended a game at County Stadium due in large part to not being born yet, I can’t help but admire how the team and the fans ultimately made it work in the face of adversity. Nowhere is this more evident to me than the final game the Packers played in Milwaukee on December 18, 1994.

With a 7-7 record coming into the game, the team wasn’t quite the NFC powerhouse they would be in the coming years but by winning against the Atlanta Falcons here, they would inch closer to a Wild Card playoff spot and return to the postseason for the first consecutive year since the ’60s.

Ultimately, the game came down to the final drive as the Pack lined up nine yards from the Falcons’ end zone with a touchdown needed on third-and-two and 21 seconds remaining. It was a scene with so much drama that it seems like something out of a ’90s sports film, and although there was no football playing dog, Favre wanted to ensure it ended like one.

Despite the risk of the time running out if he was tackled, Favre received the snap, positioned himself in the pocket briefly and then made a mad, nine-yard dash up field before diving in to secure the touchdown and win the game.

The eruption of cheers from the crowd was simply booming, as though in the moment, everyone recognized how historic a moment they were currently living. The Milwaukee Journal’s Bob McGinn referred to the moment the next day as “Favre’s Flight at County Stadium” and with startling prescience, declared that the Packers finally found “a worthy successor to Bart Starr as their quarterback.”

Packers kicker and now Packers hall of famer, Chris Jacke, referred to the play as “…vintage Brett Favre. Dumb and brilliant at the same time”.

Right tackle, Joe Sims even declared, “Hey, we have to get lucky one of these days. Brett’s not the perfect guy, but he’s such a winner”. If only he knew how lucky the Packers would be.

The team would go on to win their subsequent game to clinch a Wild Card game against the Detroit Lions which they’d win, only to lose to the Dallas Cowboys in the divisional round and end the ’94 season. However, the next three years saw the Pack return to the playoffs each year, make it to two Super Bowls, win one, and see Brett Favre earn three league MVP awards.

While it might be a bit hyperbolic to say this game brought the Green Bay Packers from “zeroes to heroes,” it’s arguable that it was a definite turning point for the team given the success that followed and the potential which preceded.

While I love the tradition and legacy of Lambeau and think it’s a much better place for the Packers to play today, I really love that Milwaukee might just be where the modern Green Bay Packers legend began. Sure, plenty of the Packers’ years in the city weren’t exactly worth remembering, but they are a part of the Packers history and especially the history of Milwaukee sports.

As a spry Joe Buck said on “Fox NFL Sunday” immediately after Favre’s “flight,” “What a way to leave Milwaukee!” I couldn’t agree more