Understanding the Bucks’ brilliance through jazz

Understanding the Bucks’ brilliance through jazz 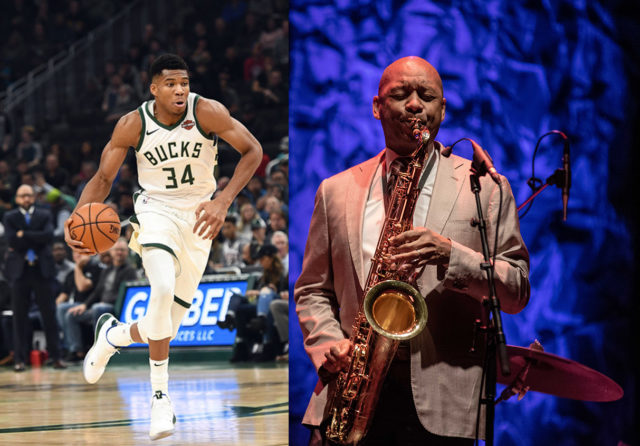 The Marsalis brothers philosophy explains what makes a great team on the stage and on the basketball court.

Last week, I must have stared at the picture of the black hole for too long, because I fell through a portal and was transported back in time.

The NBA’s regular season had ended and our Milwaukee Bucks were headed into the playoffs with the best record in the league. Then I went to the finest music venue in town — the Pabst Theater — and saw a jazz band enrapture an audience with post-bop excellence.

At that show, bandleader Branford Marsalis mentioned the Bucks during his opening remarks.

“All the girls in my house, and it is all girls, are cheering for the Bucks this year,” said Marsalis, pausing for applause, which came loud and proud.

“They just think Giannis is cute,” he added.

Looks aside, there are many reasons to cheer for Giannis Antetokounmpo and the Bucks this season. The team’s transformation from a group of promising youngsters to title-contending juggernaut has been something of a marvel, especially considering the franchise worst record the team posted during Giannis’ rookie season six years ago.

Sitting in my seat at the Pabst Theater, listening to Marsalis’ horn talk to Justin Faulkner’s drums, Eric Revis’ double bass, and Joey Calderazzo’s piano, I was reminded of the harmonic synchronicity that has characterized this Bucks season. It got me thinking about the relationship between basketball and jazz, and how the music can help us comprehend what makes the Bucks the best team in the NBA.

A couple years ago, The Undefeated — an ESPN website that focuses on the intersection of race, culture and sports — published an article about an exchange between Branford Marsalis and his brother Wynton with the Oklahoma City Thunder staff regarding teamwork as it relates to basketball and jazz.

If anyone is qualified to discuss the philosophy of jazz, it is the Marsalis brothers. Raised by influential New Orleans pianist Ellis Marsalis Jr., Branford and Wynton, along with their brothers Delfeayo and Jason, have become America’s first family of jazz. In 2011, the family was bestowed with the Jazz Master recognition from the National Endowment for the Arts. (Interestingly, Giannis is also one of four brothers.)

The Marsalis men (Wynton on the far left, Branford on the right), alongside the Antetokounmpo brothers plus Chance the Rapper.

During their dialogue with the OKC coaches, the Marsalis brothers emphasized the importance of playing together, both on the bandstand and on the hardcourt. In order to achieve this goal, each player must listen to one another, make eye contact, communicate, and have fun.

Forging the path to first place

Budenholzer, it turns out, did it by putting into play many of the same strategies the Marsalis brothers suggested to the OKC coaching staff. 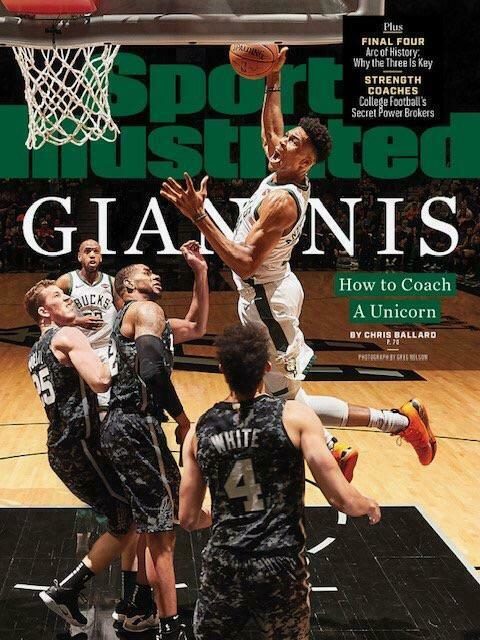 According to Wynton Marsalis, a key to teamwork is recruiting players who “believe in the value of group expression and buy into the philosophy and practices of [the] group.” This would be Budenholzer’s first task when he arrived in Milwaukee last spring. To do so, he had a private meal with Giannis and Khris Middleton — the only other player who has been with the team since Giannis’ rookie season — to lay out his vision.

During the meal, Giannis took out a small black notebook with questions that he had prepared. He uses it year-round for note-taking. Despite his accomplishments, Giannis remains hungry for advice and information. He seeks out mentors. He never seems satisfied with the results on the court, no matter how big the margin of victory.

“I just want to get better every day,” is Giannis’ most common refrain.

When Wynton Marsalis says that a great basketball player is “willing to do the most tedious and specific drill and studies every day,” I immediately think of Giannis and his infamously intense work ethic.

With such a singularly talented and driven individual, how would coach Budenholzer build a team-oriented approach?

He would need to create, as Wynton Marsalis suggests, “a value system [in which] the sacrificial decisions that undergird group success are as venerated as individual achievements.”

During that pre-season meal with Giannis and Middleton, Budenholzer made it clear that his primary goal was to create space on the floor. To do this, he wanted the players to think beyond the traditional positions. He wanted everyone moving and everyone ready to shoot three-pointers, even Giannis, who is historically bad in that department.

Budenholzer told Middleton that they were going to cut down on his two favorite types of shots — the isolation (ISO) and the mid-range. He asked Middleton to take on a lesser role so that he could better serve the team. The request humbled Middleton, who had to adjust his game. The transition didn’t come easy. In December, Budenholzer benched Middleton for showing a lack of effort on defense.

Since then, Middleton has adapted incredibly well. He might not be scoring as much as last season, but he is passing better and attacking the rim like never before. The improvements earned Middleton his first All-Star selection this year. 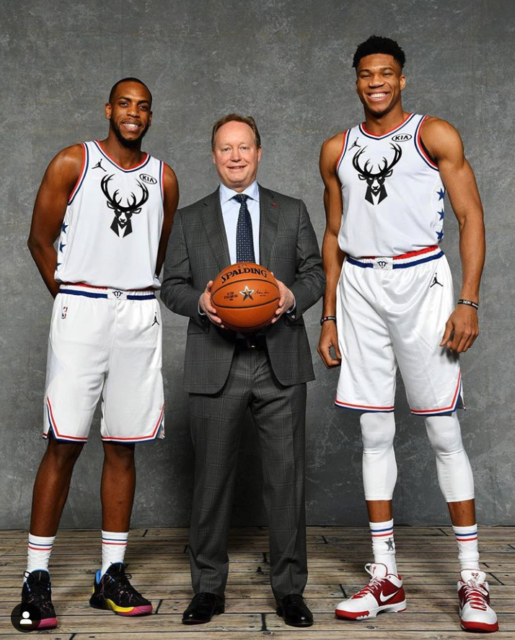 One way that Branford Marsalis seeks to improve his jazz quartet’s performance is by “focusing more on the emotional intensity of the music rather than on the technical minutia.” Along the same lines, the biggest change in Middleton’s game this season may be his level of passion on both ends of floor.

The most cliché connection between jazz and basketball is improvisation. Branford Marsalis makes a point to differentiate what he refers to as “real improvisation” versus when a jazz musician “takes a solo and presents these massive licks they’ve rehearsed at home.” The basketball equivalent of this would be a player bringing the ball down the court by themselves and executing a dazzling move they’ve perfected in practice, with no regard for their teammates.

For Branford Marsalis, “real improvisation” requires intimate familiarity between players, which is achieved through countless hours of practice and performance together.

It means playing as a unit for so long that you develop your own vocabulary, which allows you to create new phrases and resist the urge to regurgitate old phrases. This requires active listening and reacting in the moment. Marsalis described it last week at the Pabst Theater as “regularly scheduled chaos.” In basketball, Budenholzer refers to it as “positionless motion.” 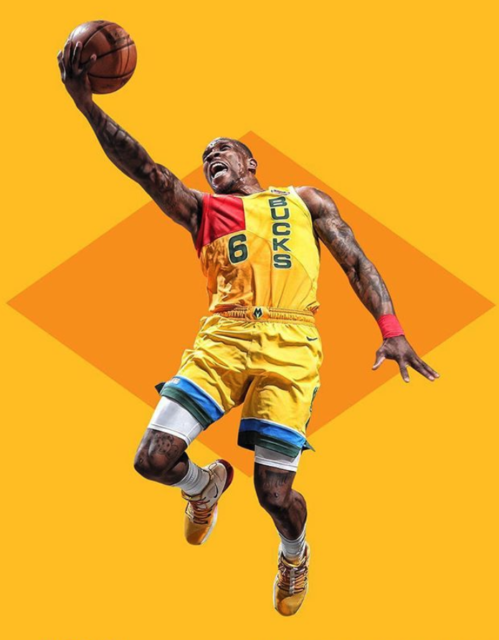 Khris Middleton isn’t the only Bucks player whose scoring decreased this season while the team play has improved. Eric Bledsoe is another example. In fact, Bledsoe has been emblematic of the Bucks philosophical shift and the benefits of “real improvisation.” For most of his career, Bledsoe has been a run and gun player, attacking the basket and shooting with little concern for his teammates.

Today, Bledsoe’s game has been reined in and balanced with the team’s goals. His fast-break decisions have become beautifully in rhythm, reminding me of the drum solos taken by Justin Faulkner during the Quartet’s performance at the Pabst Theater. 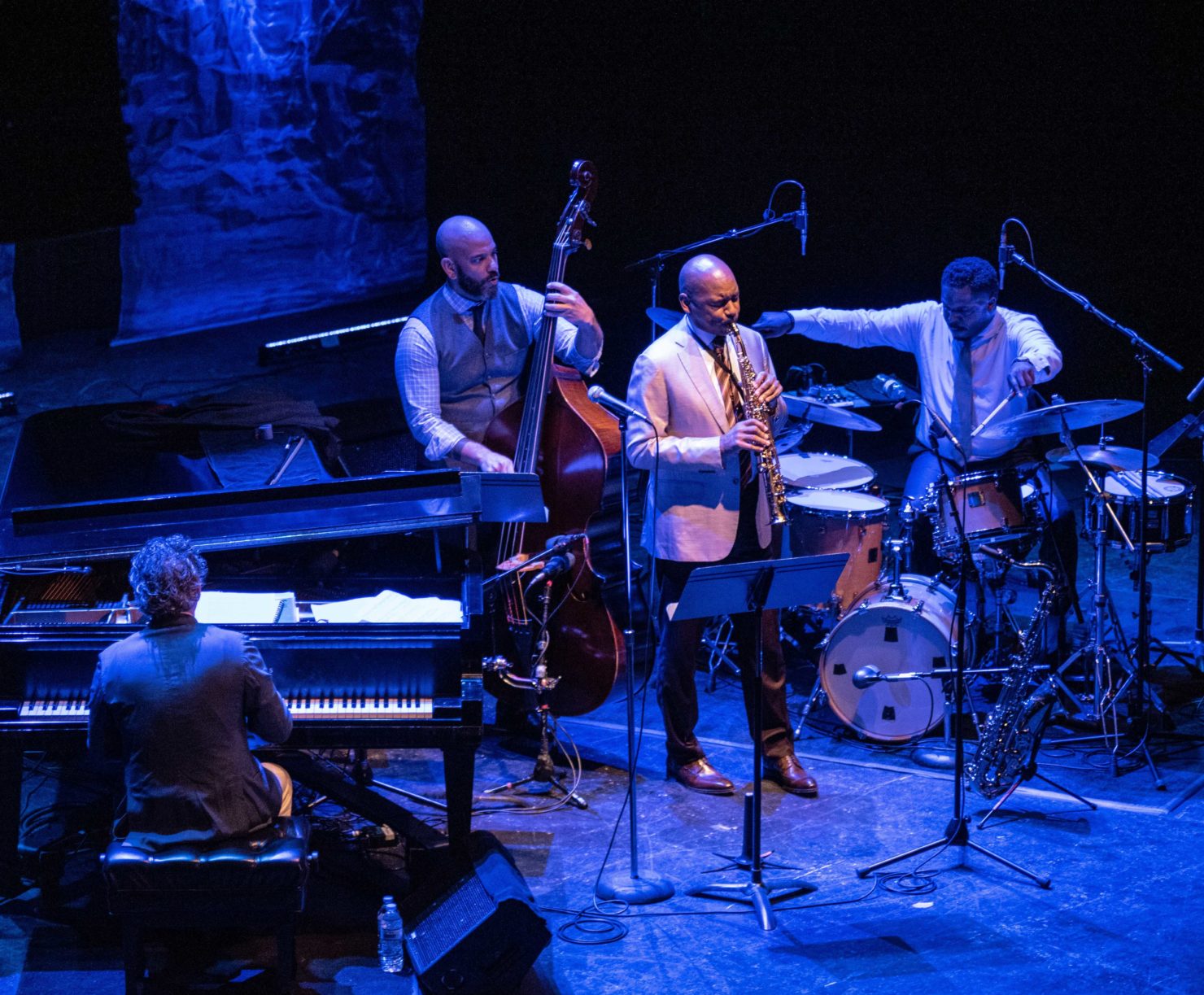 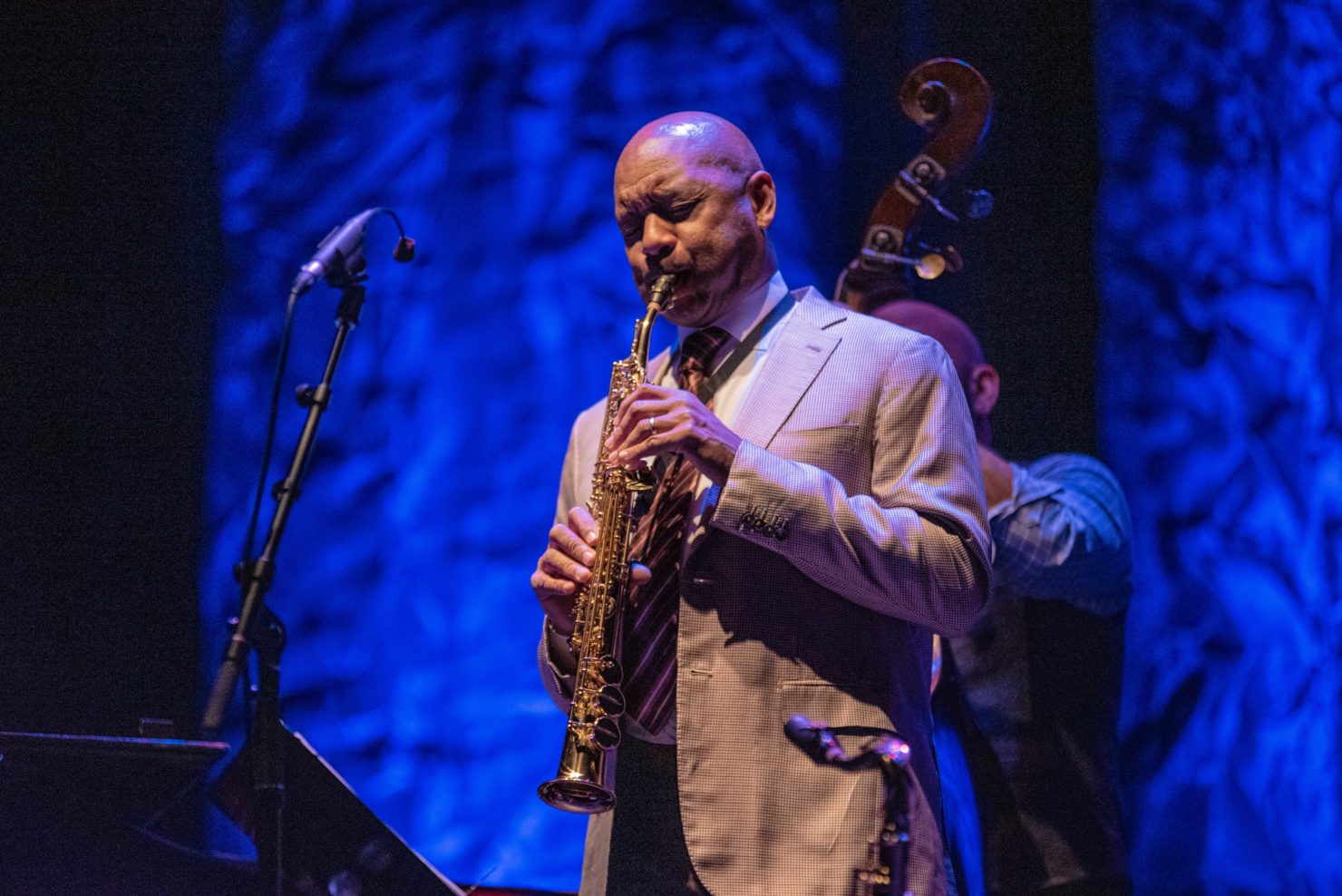 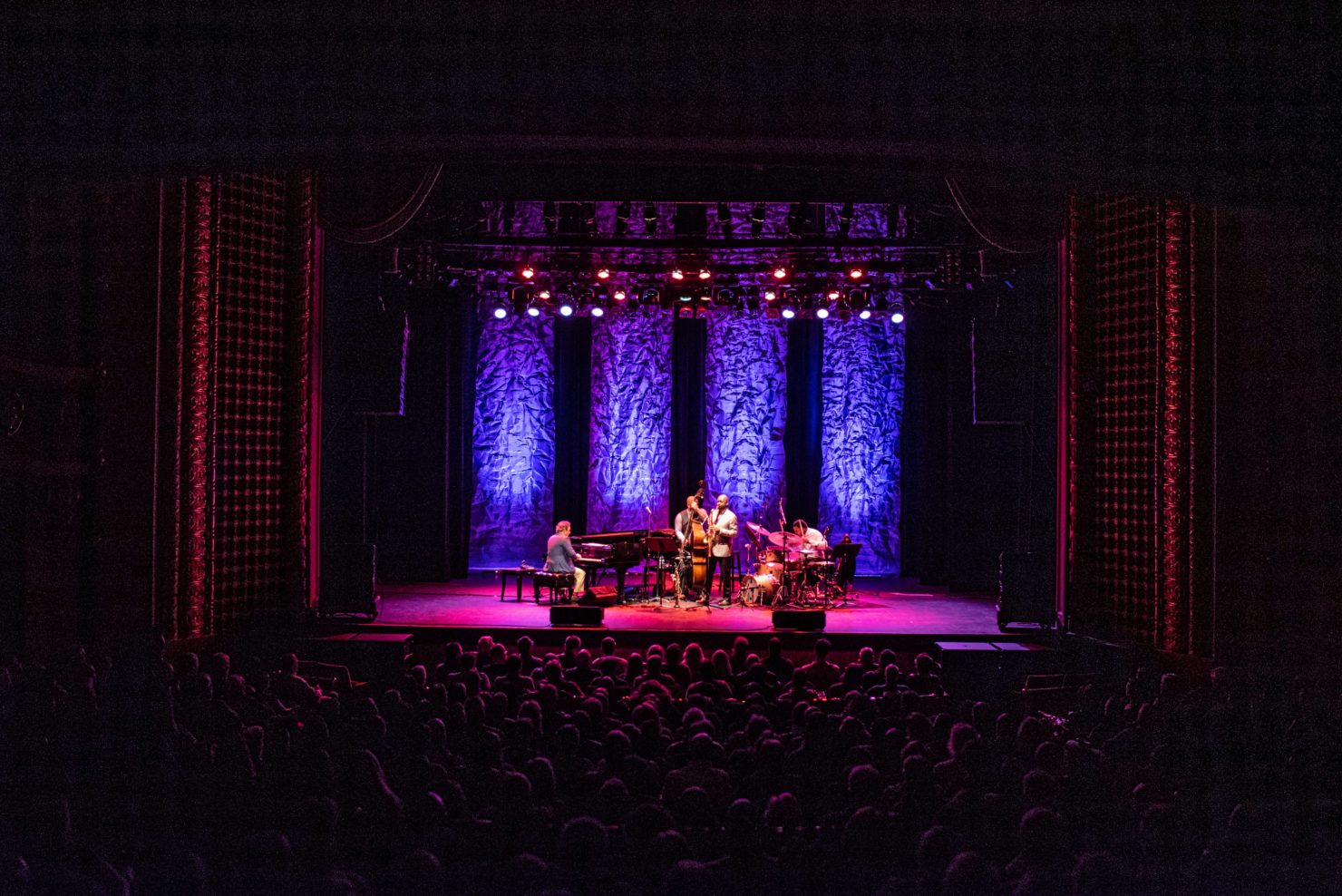 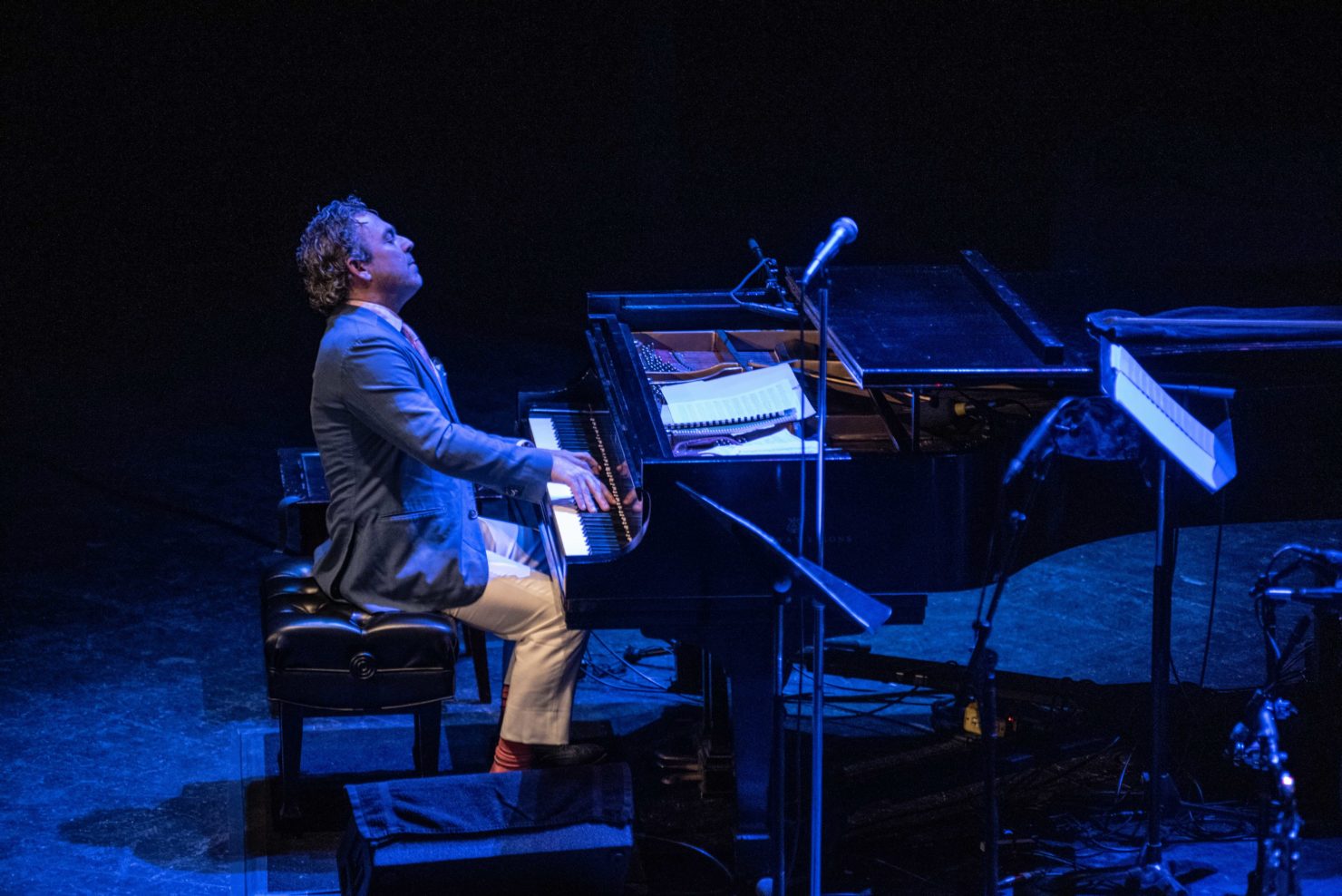 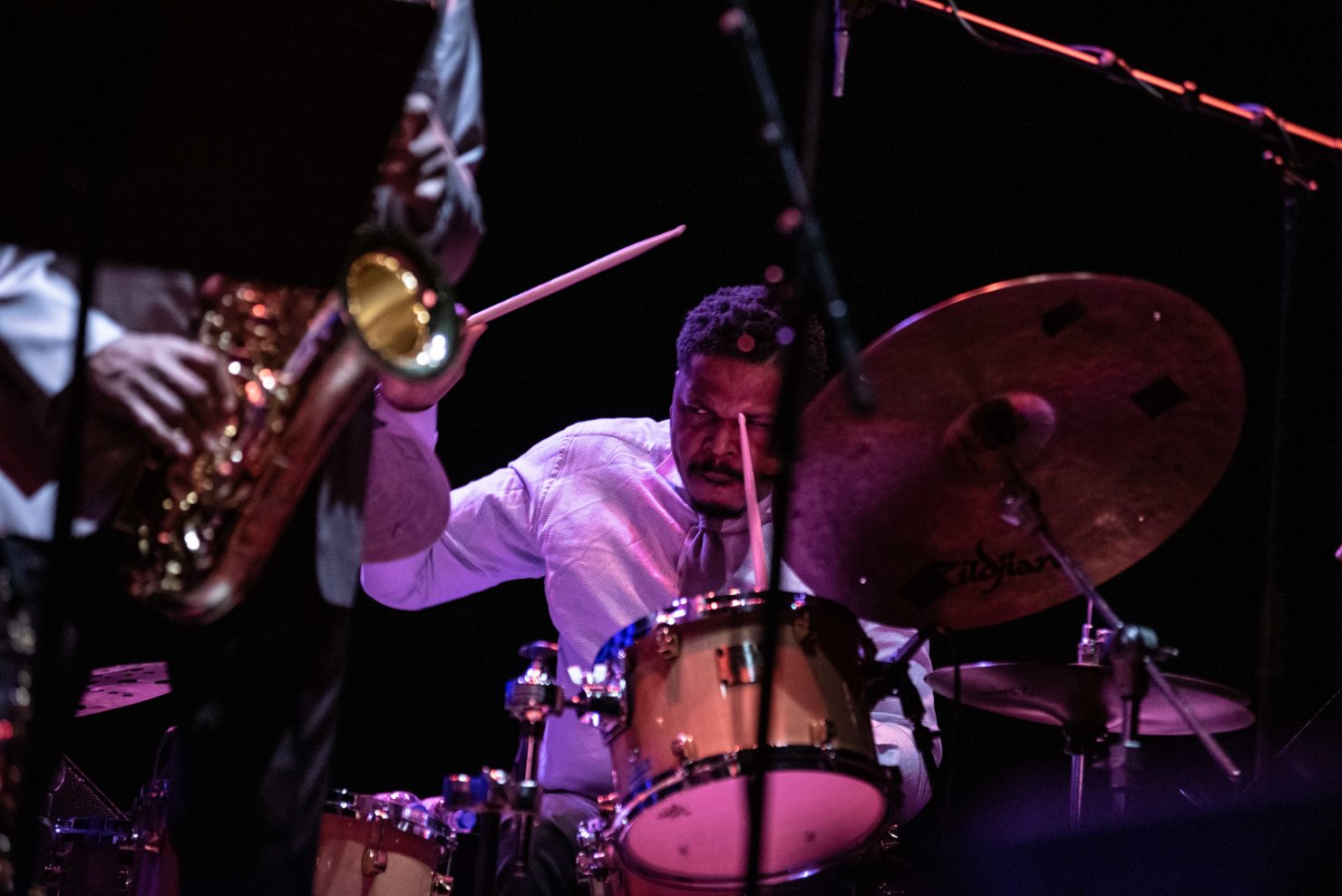 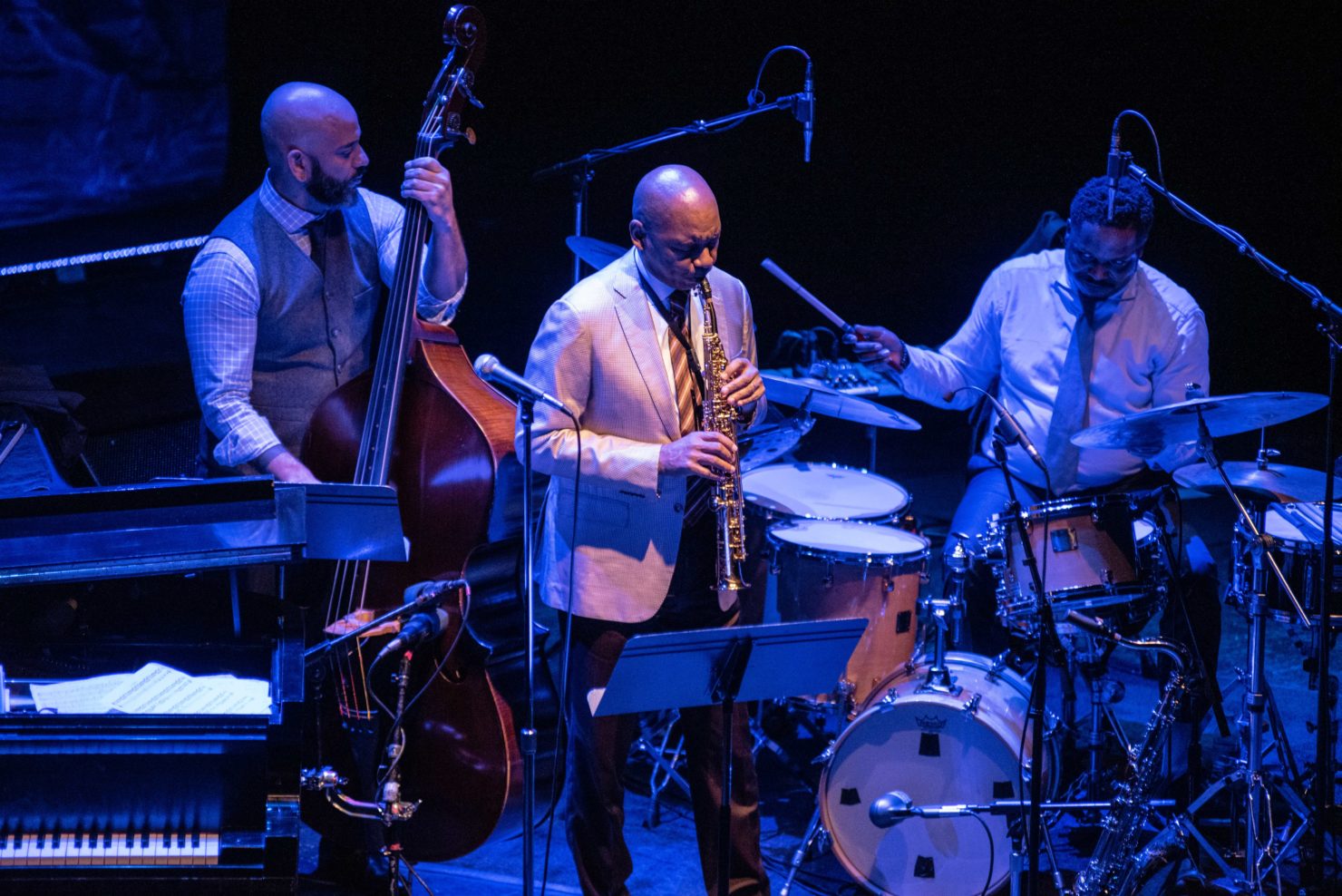 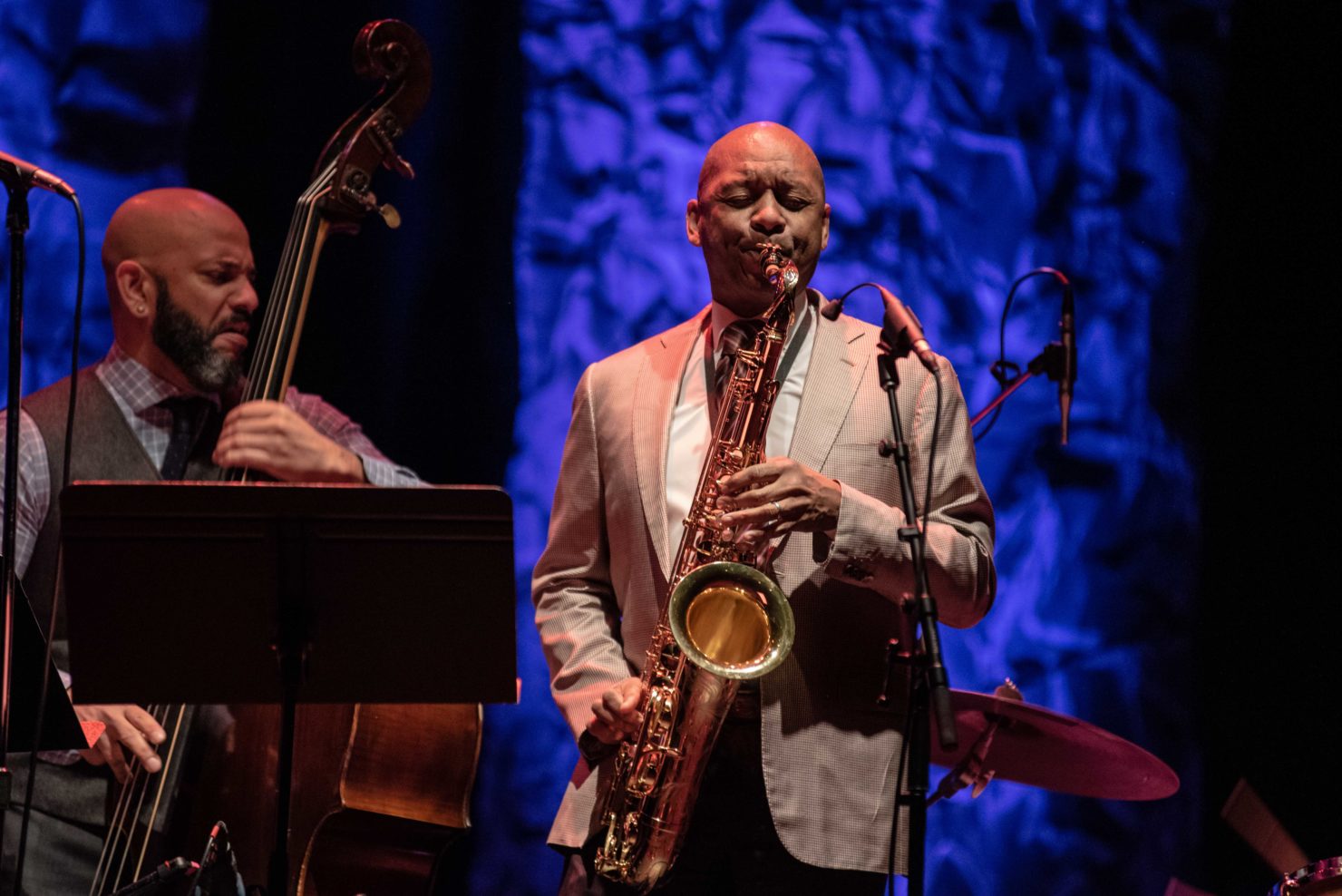 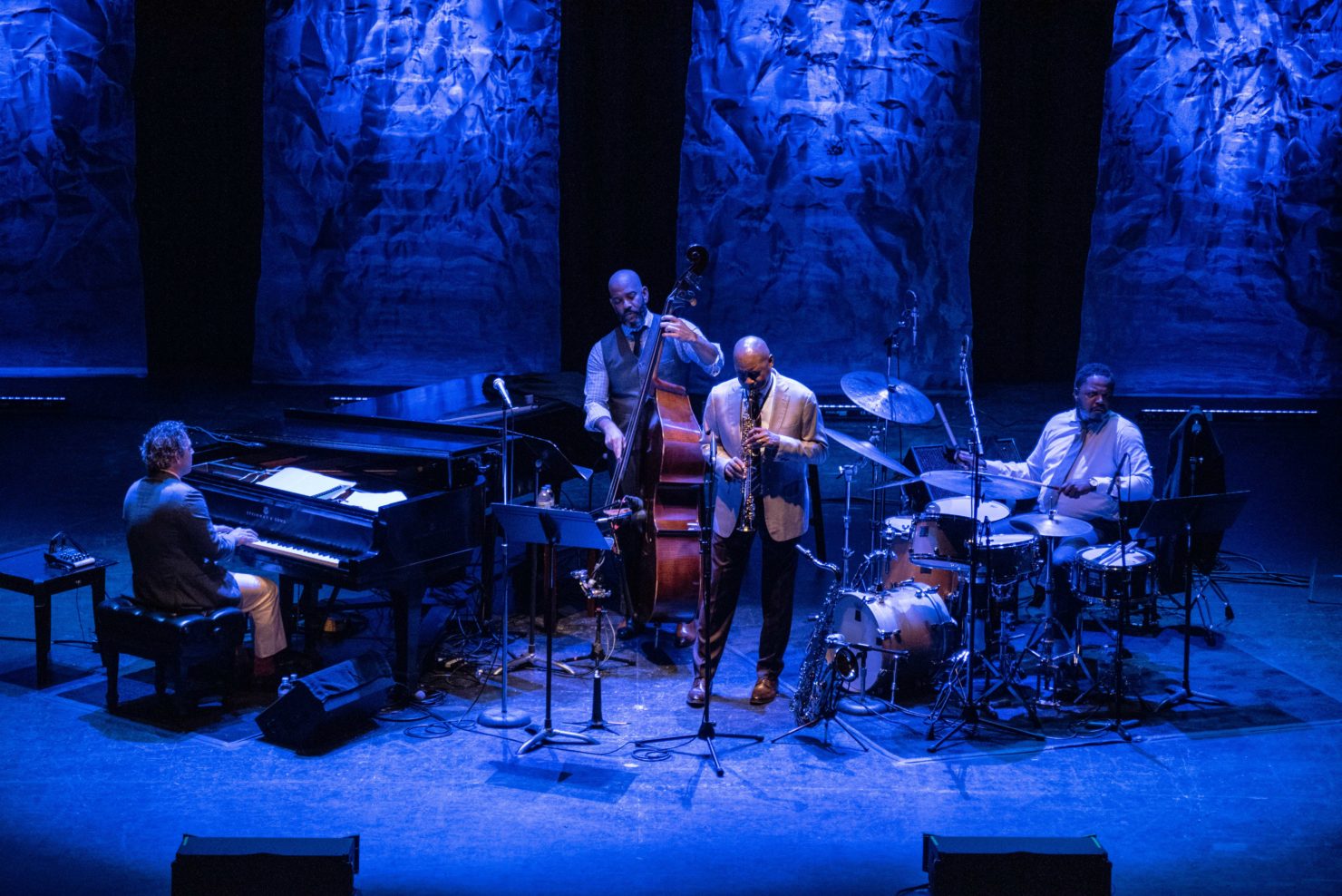 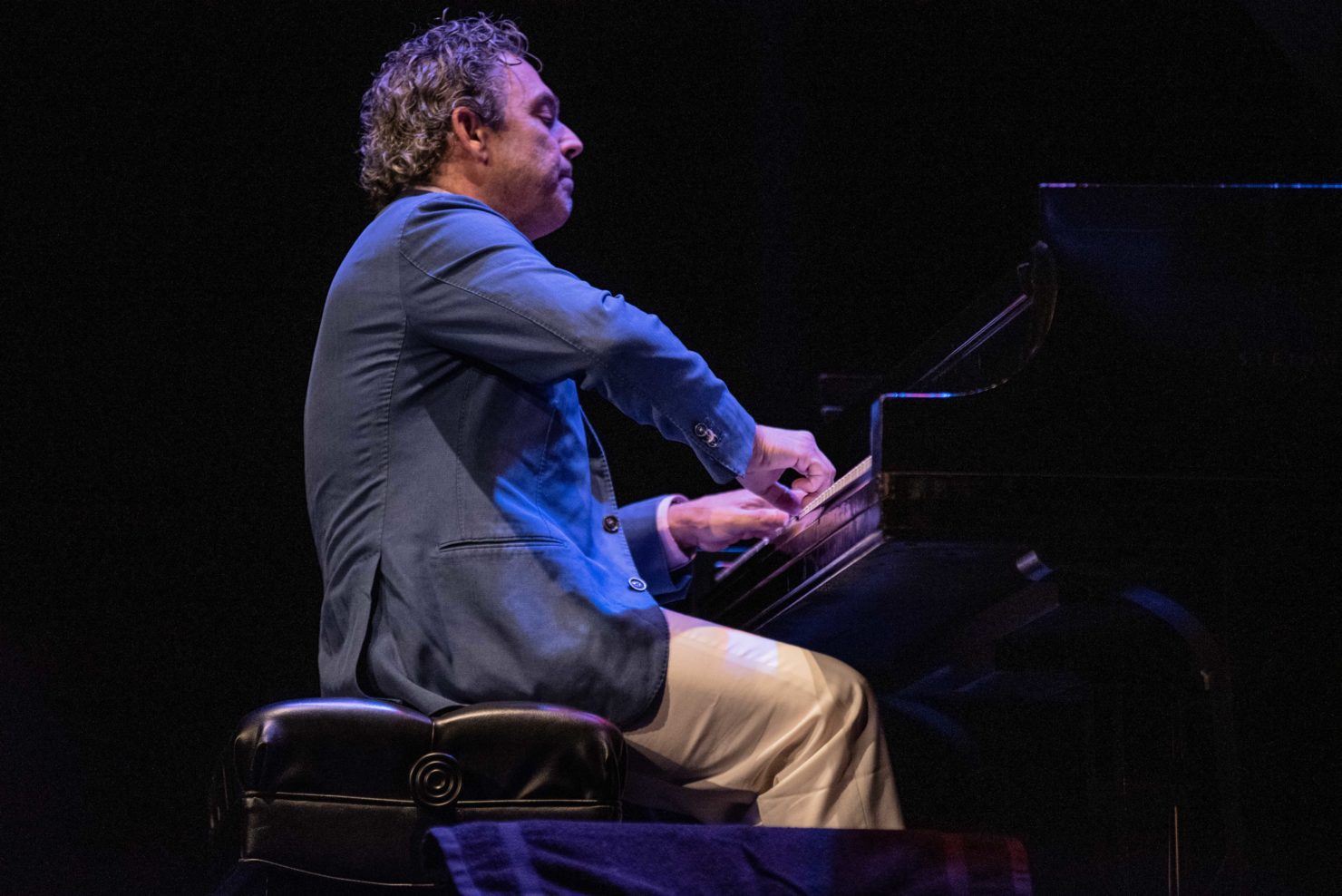 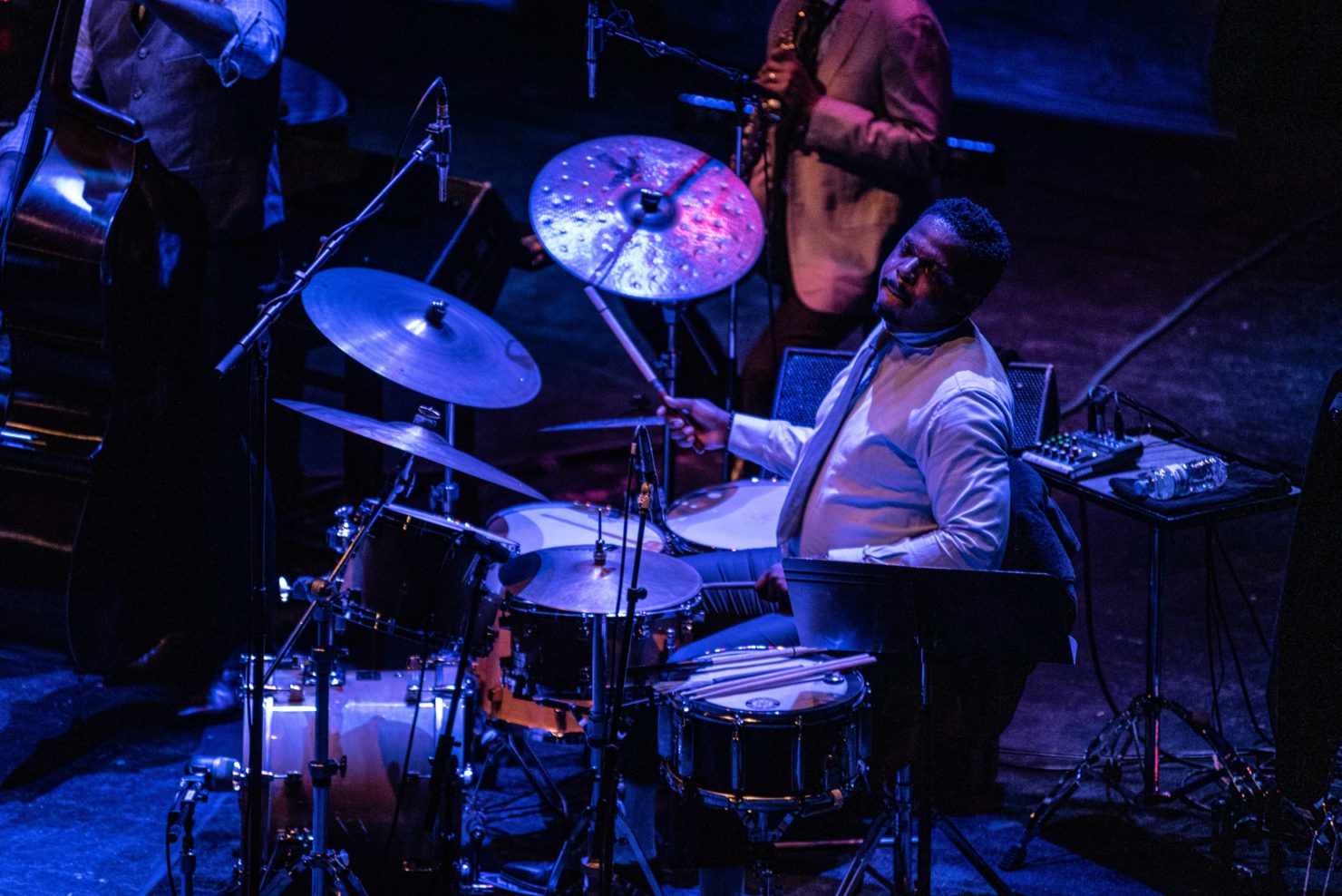 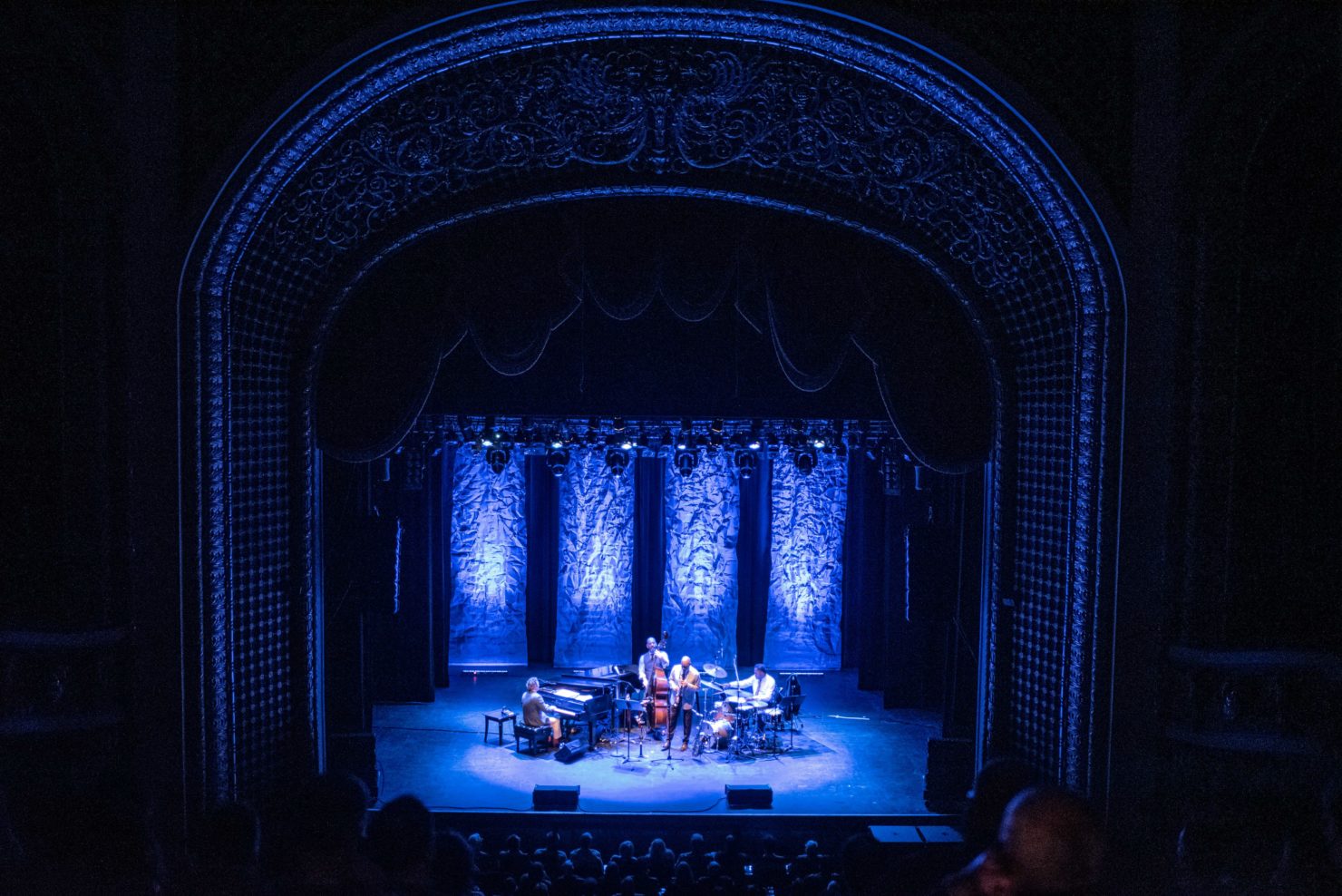 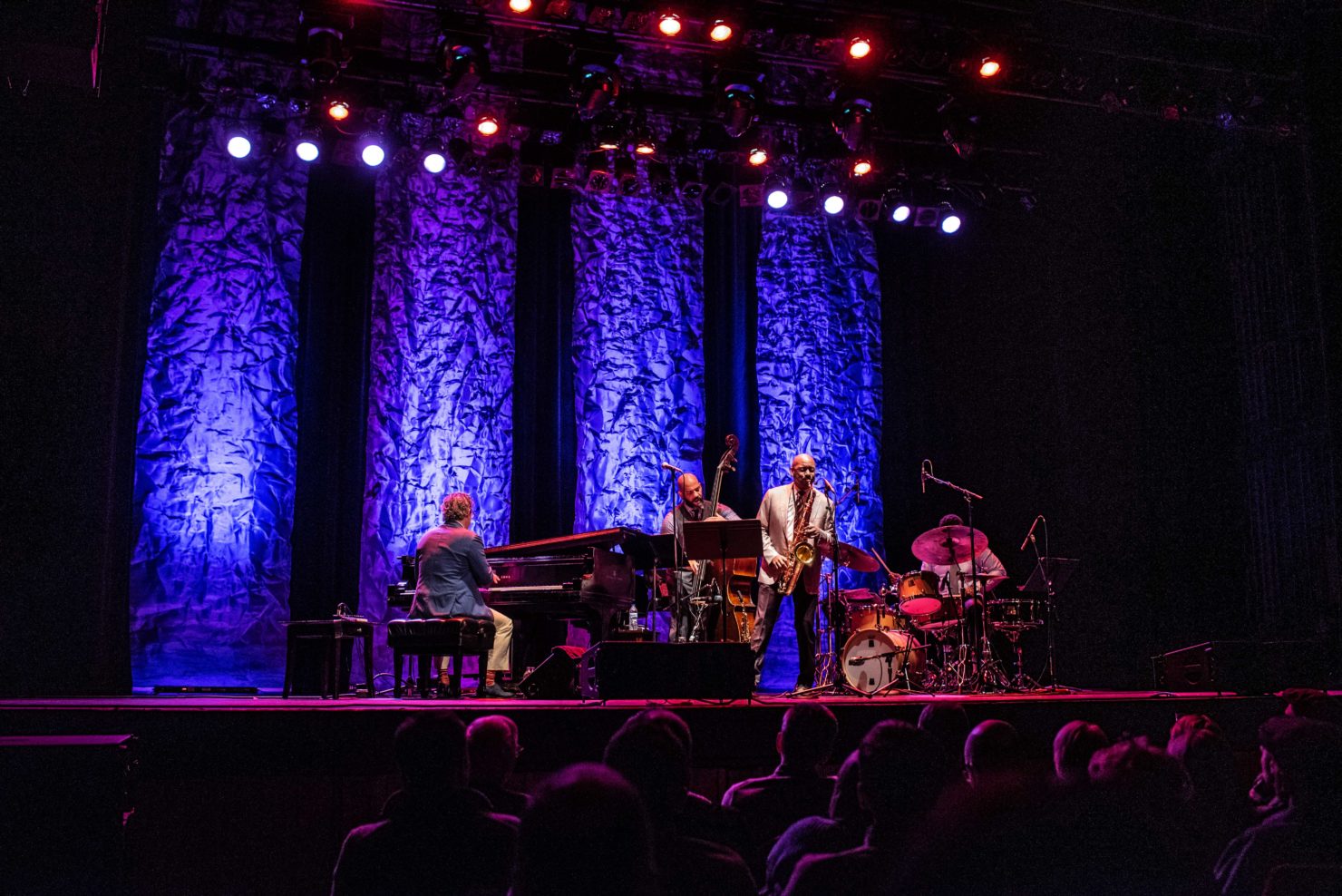 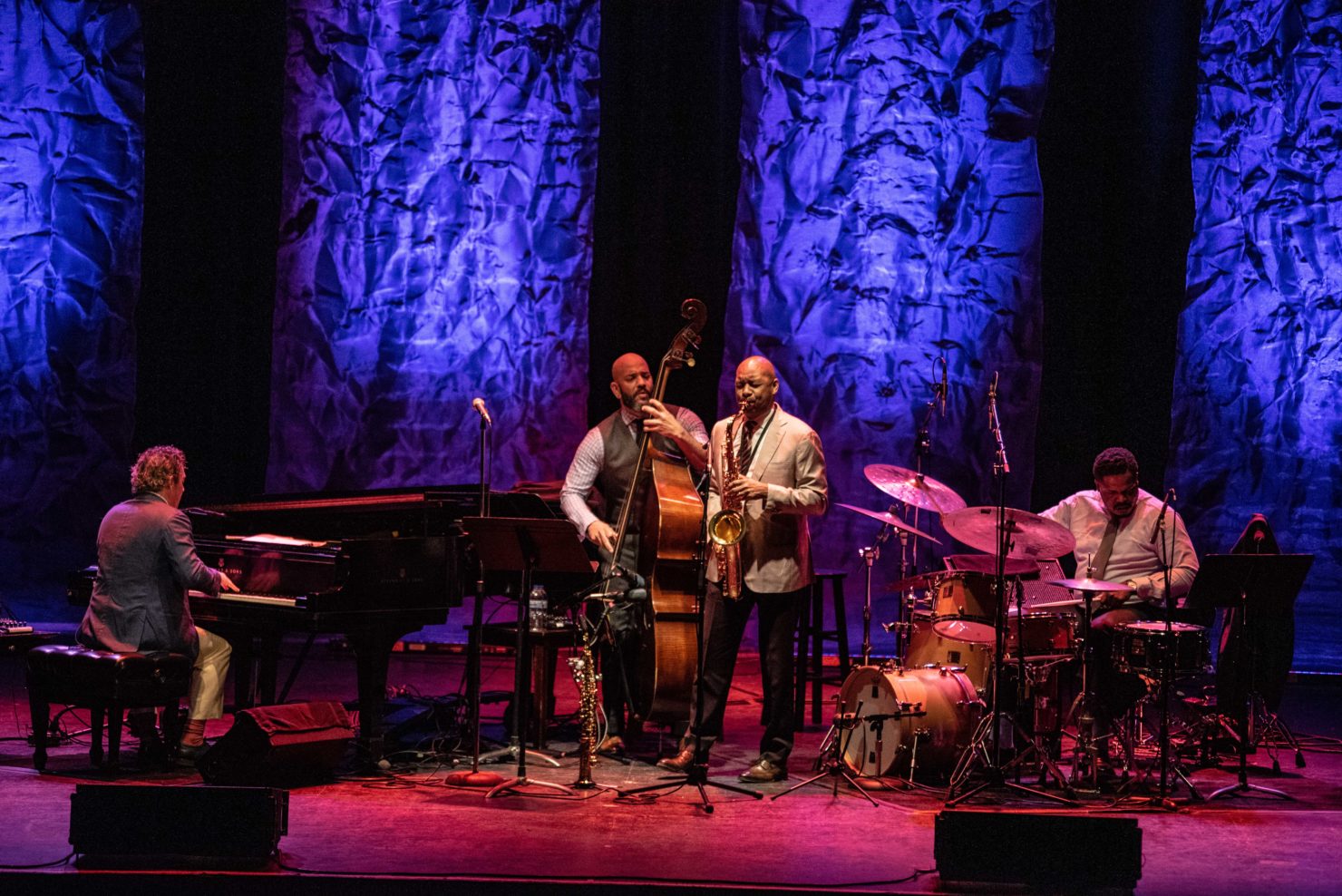 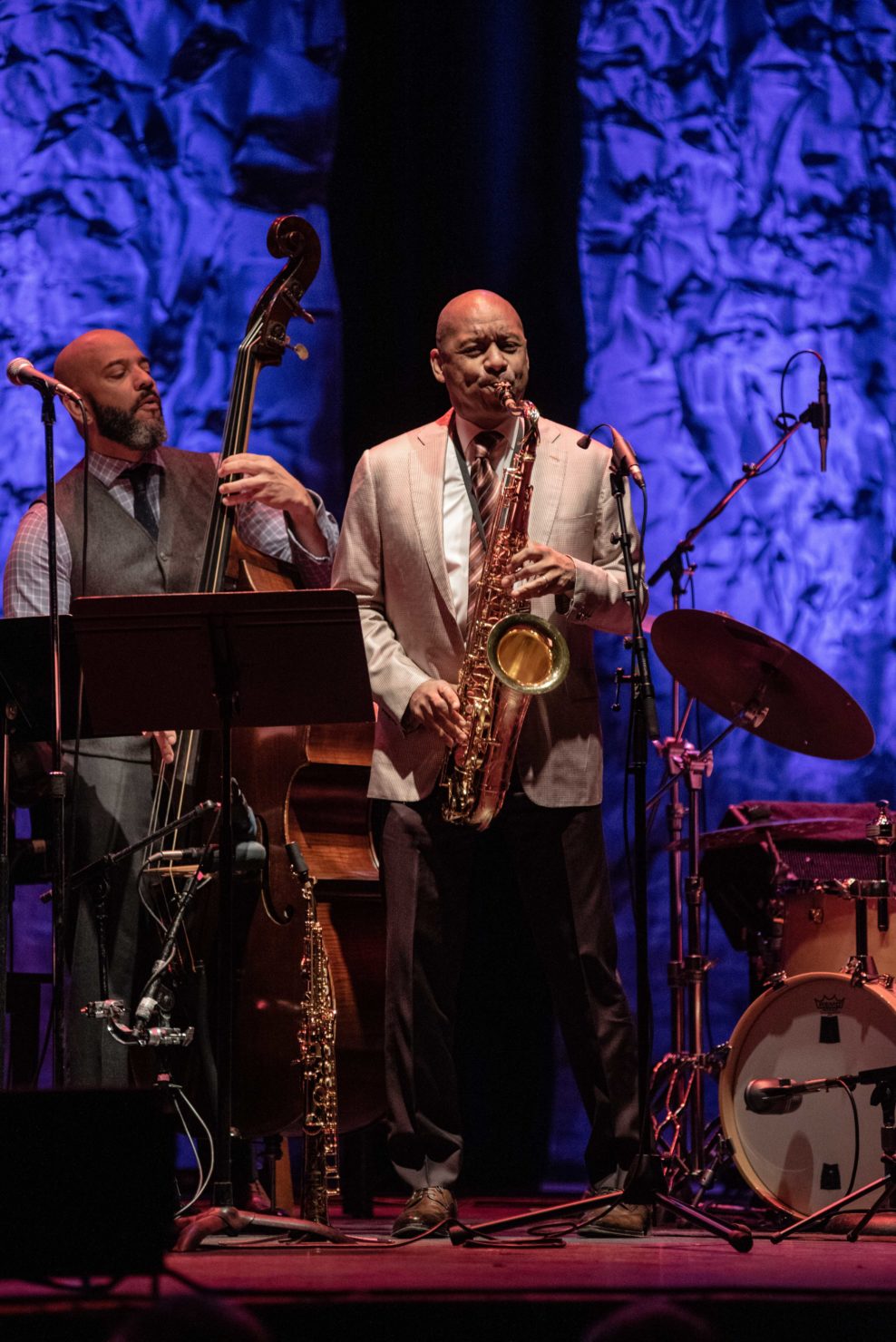 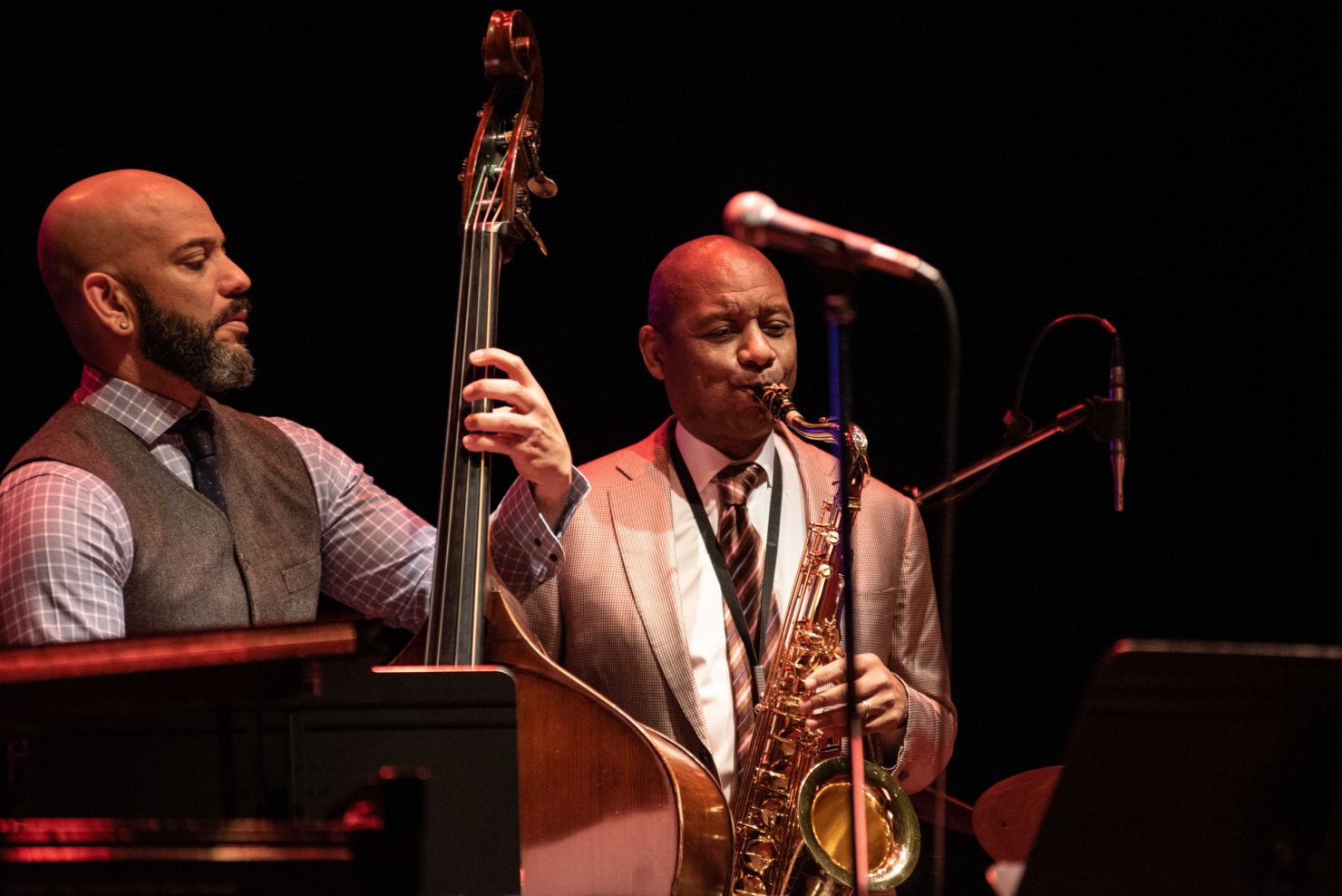 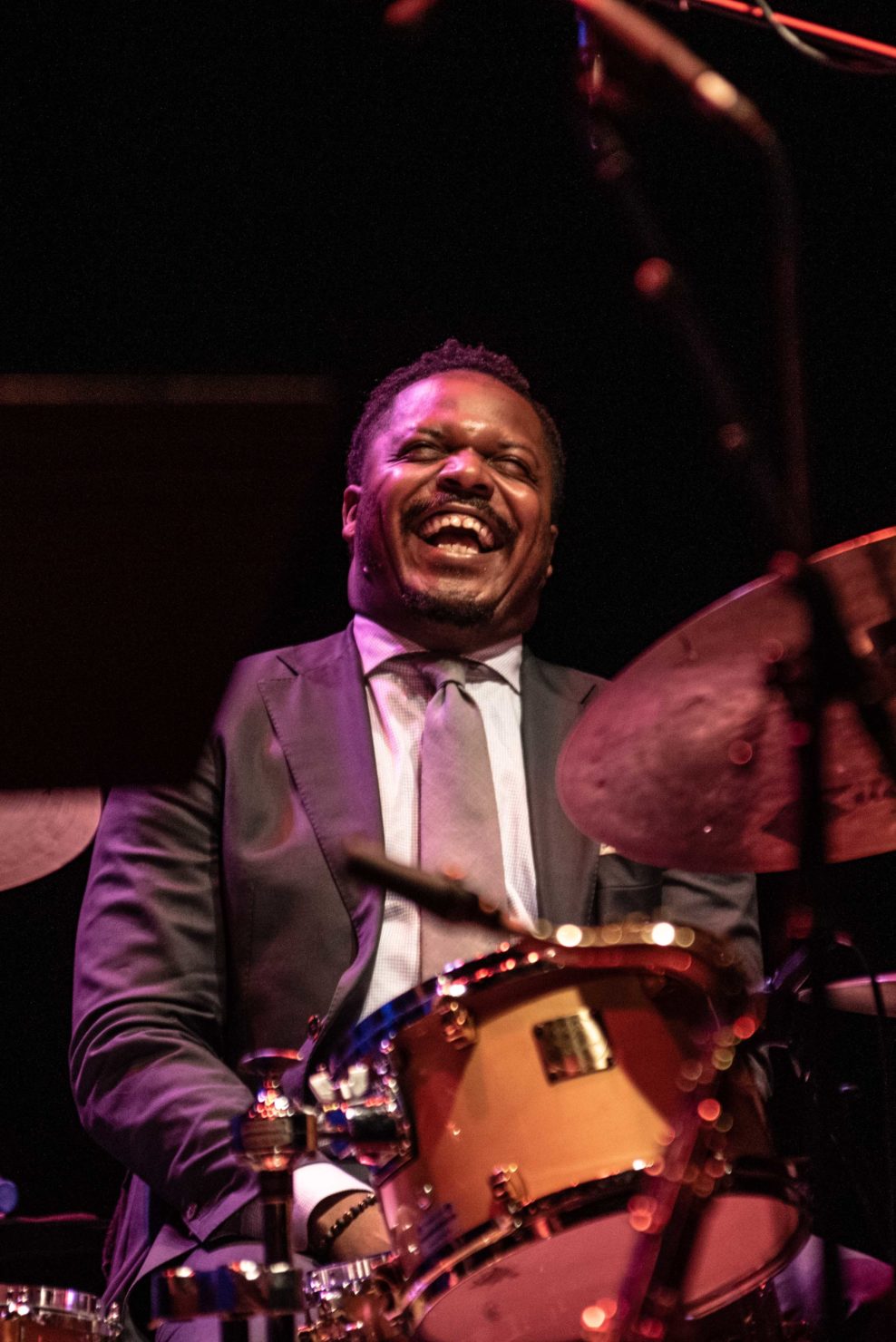 During the Pabst Theater performance, Marsalis informed the crowd that he was recovering from a bout with the flu.

“If this flu was a hurricane, I’m in the debris clean up stage,” Marsalis said.

This reminded me of Michael Jordan’s iconic performance in Game 5 of the 1997 NBA Finals against the Utah Jazz. Jordan was painfully ill, but still managed to put on a spectacular performance and secure a victory for the Bulls. Meanwhile, Marsalis and company kicked off their Pabst Theater set with frenetic energy, delivering a winning set comprised primarily of original music from their new album, “The Secret Between the Shadow and the Soul.”

During the Quartet’s encore, after a particularly raucous song, Marsalis wryly said, “That was a delicate little ballad.” To this an audience member shouted, “My ass!” Marsalis chuckled. Joey Calderazzo turned to the bandleader and admitted that was the first time he’d heard someone shout “My ass!” at a show.

“That’s cuz you ain’t where I’m from,” Marsalis replied.

“That’s nothing. Come to New Orleans. You’ll be welcome, drink in hand,” he added.

The exchange between Marsalis, Calderazzo and the audience member made me think of one of Milwaukee’s own saxophonists, Jay Anderson, who recently moved to New Orleans. The young bandleader will return to his hometown on May 3 to play with his trio for a record release show at the Sharon Lynne Wilson Center for the Performing Arts. The new record is aptly titled “Crawfish and High Life.”

Speaking of upcoming jazz performances in Milwaukee, the “City of Festivals” will once again have a major jazz festival this Labor Day weekend when the inaugural Fresh Coast Jazz Festival takes place at the Marcus Center for the Performing Arts.

Personally, I’ve been thinking a lot about jazz this past year, because I have a book coming out in July on the history of jazz in Milwaukee, which actually started as a project for 88Nine.

Through my research I discovered that the Marsalis brothers first came to Milwaukee in the early 1980s with Art Blakey and His Jazz Messengers. That concert took place at the Milwaukee Jazz Gallery in Riverwest. The venue still stands today and continues to be a vital space for the arts and community.

Below is one of the many photos that did not make it in my book. It is of the Branford Marsalis Quartet’s original drummer, Jeff “Tain” Watts, playing at the Marc Plaza hotel (now the Hilton City Center) in the mid 1980s. It was taken by local photographer Pat A. Robinson. 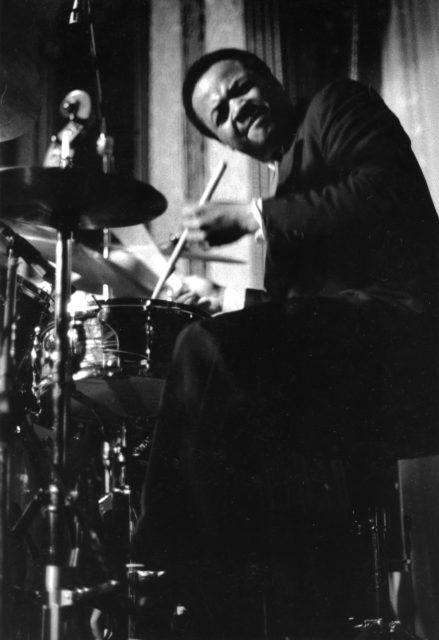 While jazz may seem like a remnant of the past, it is indeed alive and well. And it is not just legacy acts like the Marsalis brothers carrying the torch. Young virtuosos like Kamasi Washington and Esperanza Spalding are bringing jazz to a new audience.

Similarly, Bucks playoff glory is no longer a relic of the 20th Century. The Bucks have put together their best team in decades and kicked off the 2019 playoffs with a dominant win over the Detroit Pistons. Tellingly, the first basket was an alley-oop pass from Khris Middleton to Brook Lopez, a journeyman center who has been integral to realizing Budenholzer’s vision of creating space. 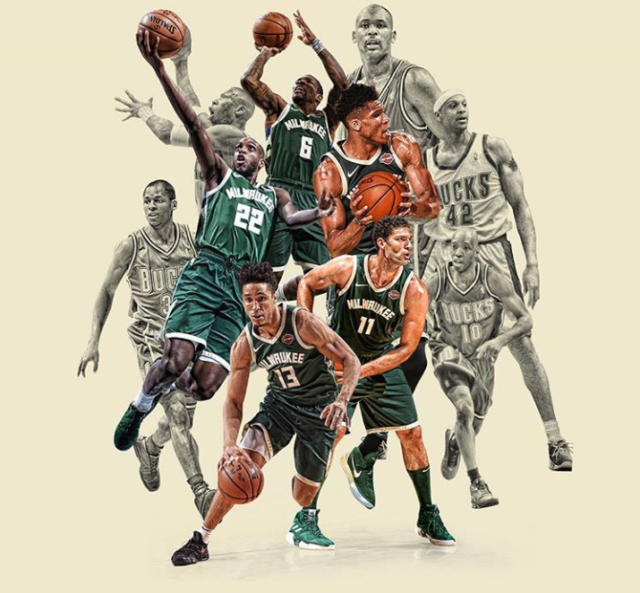 Wynton Marsalis says that jazz and basketball both have a “tradition of transcendent geniuses who change the definition of greatness and a tradition of definitive groups or teams that demonstrate the superiority of collective emotion, intelligence and execution.”

It’s safe to say that Giannis and the Bucks are now a part of that lineage.