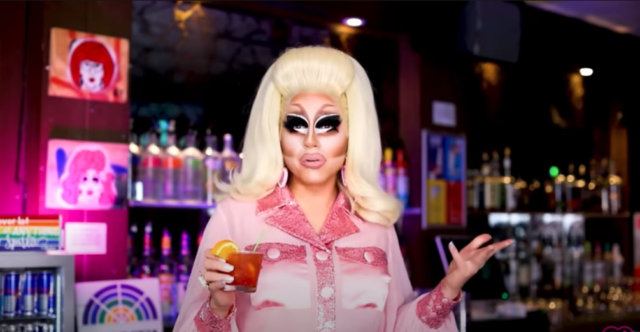 As co-owner if This Is It, a historic Milwaukee LGBTQ+ bar, drag queen Trixie Mattel has been spending more time in the city. In addition to performing, she is also learning to make a few cocktails and, fortunate for us, she is letting us watch.

In a new video published on her YouTube channel, which boasts an impressive 1.5 million subscribers, Trixie steps behind the bar to learn two Wisconsin “supper club friendly” cocktails, plus she shows how to make top shelf Long Island Iced Tea and a “lifted” Blue Moon shot.

It doesn’t take long for the quips to begin.

“It smells like an old wallet,” she says, sniffing a bottle of sweet vermouth before adding it to a Bulleit Rye Manhattan.

“It tastes like something you might syphon out of someone’s vehicle if you ran out of gas,” she says as she sips her creation. “But you know what? It’s kind of growing on me.”

Trixie Mattel, performed by Brian Firkus, became a part owner of This Is It earlier this year. The bar is the longest continually operating gay bar in Wisconsin, according to its website. In 2019, the bar expanded into an adjacent space and added an additional bar, performance area and dance floor.