Here is the centerpiece film for the 2017 Milwaukee Film Festival

Here is the centerpiece film for the 2017 Milwaukee Film Festival 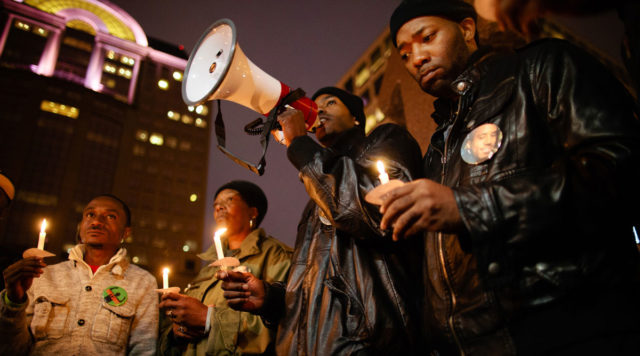 Filmed over the course of three years, “The Blood Is At The Doorstep” takes an intimate look at the family transformed by tragedy through protests, vigils, and being thrust into the national spotlight. Out of this tragedy, Dontre’s brother Nate and his family became leaders in the movement to change how the police interact with its citizens.

The Blood is at the Doorstep (exclusive SXSW trailer) from Erik Ljung on Vimeo.

This announcement comes in conjunction with the opening of the call for applications to Milwaukee Film’s Brico Forward Fund, an annual grant program established to support worthy film projects by local filmmakers. Ljung is a two-time Brico Forward Fund award recipient, and utilized $50,000 in cash grants and production services from past awards to complete The Blood is at the Doorstep.The feature-length follow-up to Ljung’s short film Mothers For Justice (MFF 2015), The Blood is at the Doorstep digs even deeper into the epidemic of police violence in the United States, specifically through the case and aftermath of the tragic 2014 killing of Dontre Hamilton by a Milwaukee Police Department officer. Ljung’s riveting, powerful documentary gives audiences intimate access to Dontre’s family and the surrounding community as well as the paths their lives take as they mourn Dontre’s passing, and struggle to make sense of the events that followed. The film made its world premiere at SXSW this past March and has screened at prominent film festivals throughout the country.

“The Brico Forward Fund has been absolutely essential in getting serious about supporting the next generation of filmmakers right here in Milwaukee,” states Ljung. “The funds and services we received through the Brico Forward Fund have been critical toward not only the completion of The Blood is at the Doorstep, but also the quality. The financial support allowed us to cover travel expenses in order to follow our story and also allowed us to hire other extremely talented Milwaukee area creatives to lend their expertise to the project.”

“Supporting local filmmakers like Erik to create impactful and thought-provoking work is a goal of our organization,” said Jonathan Jackson, Artistic and Executive Director of Milwaukee Film. “Milwaukee is full of talented filmmakers and by providing funding opportunities like the Brico Forward Fund, we can continue to grow our filmmaking community and make Milwaukee a leader in film culture. The Blood is at the Doorstep deserves national attention and recognition as one of the best and most important documentaries of 2017.”

Now in its third year, the 2017 Brico Forward Fund will award a pool of $50,000 in cash and over $60,000 in sponsor-donated production resources (camera rentals, lighting rentals, and post-production audio and visual services, etc.) to jury-selected recipients in packages that combine cash and services to suit the needs of the project.

Lead underwriting for the cash portion of the Brico Forward Fund will be provided by the Brico Fund. Production support is being provided by The Electric Sun Corporation, Independent, North American Camera, and entertainment attorney Dan Kattman of Reinhart Boerner Van Deuren.

Applicants must be residents of the M7 counties (Milwaukee, Waukesha, Kenosha, Racine, Ozaukee, Walworth, or Washington), and will be asked to describe their film project in production or development, offer a work sample and budget, and explain what will help them push their project forward. An external jury will consider applications, identify awardees, and build award packages to suit each winning project’s needs.

The deadline to apply is 11:59pm on Sunday, August 20, 2017 and winners will be announced during the 2017 Milwaukee Film Festival.