‘The Art of Self-Defense’ is an extremely masculine film

‘The Art of Self-Defense’ is an extremely masculine film 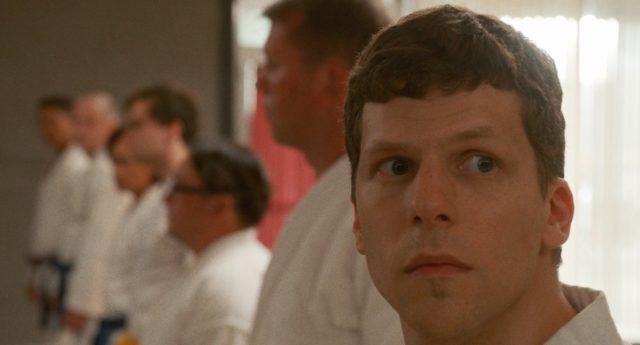 This week we’re taking on Jesse Eisenberg’s new martial arts comedy. Read on and stream the episode below to learn our thoughts on “The Art of Self-Defense.”

“The Art of Self-Defense” is a masculine film. It’s about masculinity. It battles masculinity with masculinity. It beats you over the head with its masculinity. It’s also really funny. Not in the belly-laugh type of way, but in the smug-chuckle-softly-to-yourself kind of way. It’s a dark comedy written and directed by Riley Stearns and starring Jesse Eisenberg.

As Kpolly lays out, Eisenberg usually osculates between two character templates: smug and smart or meek and small. In this role he is meek and small. He starts as a pencil-pushing wuss. Then one night, on his way to get dog food he gets beat up by a biker gang. After the encounter he stumbles upon a karate dojo, an over-the-top teacher, and slowly learns the ways of masculinity through self-discipline, metal and the occasional throat punch.

Kpolly and I had some differing thoughts on this dark comedy. I don’t want to go too far into it, just listen to the podcast and chose for yourself.