In an unprecedented act, the Bucks boycott Game 5 in response to the Jacob Blake shooting

In an unprecedented act, the Bucks boycott Game 5 in response to the Jacob Blake shooting 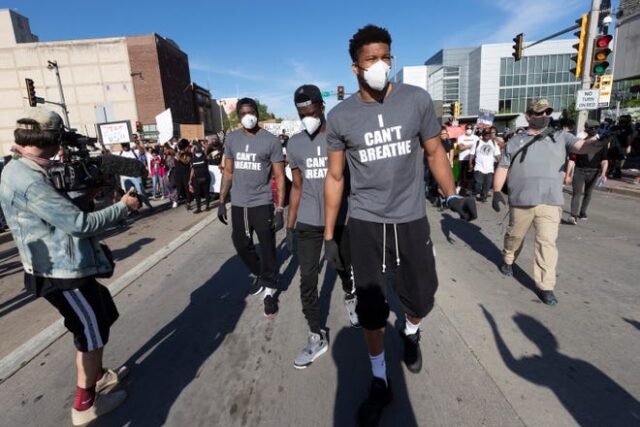 In an act of protest perhaps not seen since Colin Kaepernick first began his peaceful protest four years ago in response to racial inequality and the oppression of Black Americans, the Milwaukee Bucks decided to boycott Game 5 of their opening playoff series against the Orlando Magic today, as first reported by Adrian Wojnarowski of ESPN.

Talk of boycotting games across the league first broke earlier this week, with the NBA Players Association executive committee engaging in discussions with players seeking guidance on the logistics of doing do according to a report by Yahoo Sports.

The protest comes in the wake of the attempted murder of Jacob Blake in Kenosha, Wis. by police officers who were responding to a domestic dispute call — and days after Bucks guard George Hill questioned why the team was even in the bubble, playing games, to begin with.

“Watching stuff that happened in Wisconsin the other day really breaks my heart,” Hill said. “We’re down here playing the bubble to do these things for social justice and all that, and to see it all still going on and we’re just playing the games like it’s nothing, it’s just a really messed up situation right now.”

Hill’s frustration was echoed by coach Mike Budenholzer, Khris Middleton and others within the organization. However, the Bucks are not alone in their frustration with a lack of substantial change — players from the Toronto Raptors, Boston Celtics, Lebron James and coach of the LA Clippers, Doc Rivers are just a few of the NBA’s voices to speak out on being distraught with the shooting of Blake.

“It’s amazing why we keep loving this country, and this country does not love us back. It’s really so sad … we got to demand better … ” Rivers stated in a press conference following the Clippers win over the Dallas Mavericks on Tuesday.

It is currently unclear what impact the boycott will have on the Bucks’ series against the Magic or if any other teams will join the Bucks in this historic decision, especially as unrest in Kenosha continues with an Illinois teen arrested after shooting three protestors last night, killing two and the White House authorizing up to 2,000 National Guard members to be sent to contain the unrest.

UPDATE: Other teams have joined the Bucks.