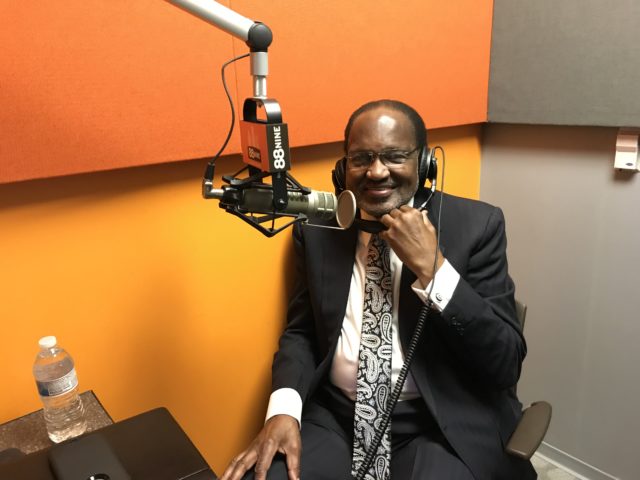 It’s not every day we get a legend in our studio. Al Bell started his professional career as a DJ before joining the Memphis soul label Stax Records in 1965, where he worked his way up through the promotions department to become the label’s executive vice president. Although he never considered himself a musician, he oversaw production and wrote songs for some of the artists on the Stax roster, including the Staples Singers’ immortal “I’ll Take You There.”

While he was in town for an appearance at Backline, Bell swung by our studio for a DJ takeover, where he chatted with host Ken Sumka and shared some of his favorite Stax songs and the stories behind them. You can listen to the segment and read excerpted portions of Sumka’s interview below.

You’ve been in Milwaukee for a few days now, and it was part of your routine to come through Milwaukee when you were working for Stax, right?

No doubt about it. It was very important to us, because we used Milwaukee and would get our records played here on the stations in Milwaukee, and because of word of mouth and influence it would affect Chicago. You’d get the word of mouth. The people from Milwaukee would be talking to people up and down the highways, so it influenced Chicago. They felt it.

The first song we’re going to play is the Staples Singers’ “When Will I Get Paid.” This was important to you, because as somebody who worked at a record label and worked closely with a lot of the artists, this was a question a lot of the artists had: When will I get paid for this work?

It was a question of the artist, but also at that time it was a question for the African American community: When will we get paid for the work we’ve done? It’s still a question in many instances [laughs].

Like working with a precious, dear friend, and someone that I and all of us at Stax were very close to, because he was just that kind of person. He had that attitude where he related to everyone, and he was just very sincere – very sincere. I loved working with him, I loved being around him. And I hasten to add, so was the case with the musicians and personnel at Stax. They all felt that way about Otis Redding. He was just that rare human being.

And he was a really smart businessman, too. He died very young in his 20s, but he had already had a measure of success and set up his family well. He had no idea he was going to go as young as he did, but he set up his family so in his absence his family and his heirs would be well taken care of.

Yes. He came from and was influenced by the African Americans that preceded him, who had the influence of that kind of thinking, of working together and building families and building a future for their family. And that was the role of the male at the time, to make sure that you did that. Not all African Americans had that attitude, but Otis had it, and it was at the forefront of his thinking and caring about people.

And such a talent. You wonder what would have come of Otis had he not passed as young as he did.

My God, I don’t know. I’ve got to tell you, I was so close to him, and I loved his music and him as a person so much. When I heard, as a matter of fact I was at a casino in Las Vegas for a convention, and they announced over the loud speakers that he had been killed in that plane crash in Madison, and it took the life out of me. It took me 10 to 15 years after that where I could even listen to a recording of him. I couldn’t handle it. He was just that great. He was just that kind of person.

As an executive as Stax, you were a witness to so much great musical history. These songs endure 40 or 50 years after they were written. They’re still played on the radio every single day. How often during this process were you pinching yourself going, “Man, this is going to be something?” It almost seems like it might be a daily occurrence with the folks you were working with.

It would be, but as a disc jockey, listening to people, listening to what they had to say about music, visiting the restaurants and the clubs and seeing what was being played and how people reacted to it, I learned how to appreciate how music affected people. So when I would hear a certain song, hear the lyrics and the melody and feel the rhythm in it, that influenced my thought process. So when I heard a song and knew that certain segments of the marketplace would automatically react to what it was about, because most of our songs reflected what was going on in our lives, our lifestyles and our living, so when I could hear that in a song and then hear a melody that I could feel, because I knew that others could feel… when I would hear that, I would know it was a hit.

The song we’re about to play next, you played a significant role in: the Staples Singers’ “I’ll Take You There.” Tell me a little bit about the genesis of this song.

In many instances, or all instances, I’ll say I can’t write, because I’m not a writer. In this case, that was a song that literally was written through me. I had a problem at that time in my life reconciling death. I had three baby brothers that had died. One that after birth had double pneumonia and died, two murdered. And after the second murder I couldn’t deal with that anymore. I went from Memphis to look for that person that had killed my baby brother. All over the place. I couldn’t find the person. I suspected someone, got to them and that wasn’t the person, and one of the guys with me said, “Hey man, you’re here looking for who killed your brother, and the funeral is going to be tomorrow, and you haven’t even visited your family.” I was struck. And I said, “OK, thank you.”

I went and got with the family, went to the funeral, and the next day after the funeral went to my father’s house for the repass, where family and friends gathered together, and I couldn’t interact with the people. So I went out into his backyard, where he had an old school bus that he used to use to haul cotton toppers and cotton pickers to the cotton fields in the early days; he had them to remind him where he’d come from. He was a landscaping contractor by then.

So I went out there and sat on the hood of that school bus, and I all I could do was just cry and moan, because it had just affected me that much. And of the sudden in my head I heard, “bum bum bum bum/I know a place/Ain’t nobody cryin’/Ain’t nobody worried/Ain’t no smiling faces lying to the races/I’ll take you there.” That came at once. And when you listen to it now, there’s only one verse in that song, that one verse. I tried to go back and write other verses, but I couldn’t. I got with Mavis Staples, of the Staples Singers, and said, “Mavis, I’d like you to sing this song for me.” It was a different rhythm feel for her, and it took her some time to get the rhythm feel, but once she got the story, she brought death to life with that song. And that’s what you hear with “I’ll Take You There” by the Staples Singers. Mavis, she brought it home. It’s alive today … It helped me overcome my concern with death. It helped me overcome that. I can reconcile death now, and don’t have a problem with it.

The song we’re going to play next is arguably the most famous and well-regarded instrumental in rock ‘n’ roll: “Green Onions” by Booker T. Were you there for the genesis of that riff and that song?

No, I wasn’t. But I got a chance to play it on the radio, and it was one of the songs prior to joining Stax that got my undivided attention as a disc jockey who was very critical of the music that I played and the music that I knew people wanted to hear. But when I heard “Green Onions,” I said, “Oh my god, what is this?” Our industry likes to categorize music by genres, and I said to myself, “I don’t know what they’re going to call this or what genre they’re going to put this in. All I know is that this just feels good, and it’ll make people feel good and forget about whatever’s on their mind at the time.” “Green Onions,” that was done by the original Booker T and the MGs, and for your audience’s sake, “MGs” meant “mixed group,” because there were two black guys and two white guys during this segregated period in America. … I loved it, and love listening to that song today.

For the complete interview with Bell, including anecdotes about Sam and Dave and Isaac Hayes, stream the segment above.