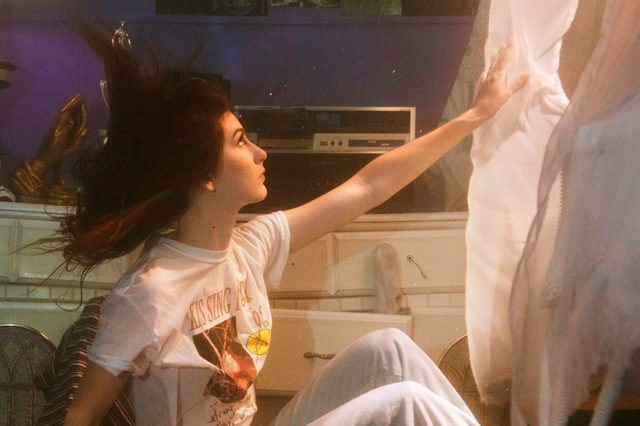 Weyes Blood on the making of 'Titanic Rising'

Natalie Mering is Weyes Blood. I talked to her on the phone ahead of her “Titanic Rising” album release. Our conversation below ranged from why she decided to “go for it” with the full instrumentation throughout the album, how Barry Gibb inspired the LinnDrum on “Andromeda” and how the “irony and the absurdity of something as iconic as the tragedy of the Titanic” is a perfect metaphor for climate change.

Our conversation below has been edited for length and clarity.

I do this segment called 5 Songs We Can’t Stop Listening To. Every week, I have guests and we talk about what we’re listening to. And so, at one point I will ask you, “What’s the last song that you couldn’t stop listening to?” But I was talking to Julia Jacklin the other week. Do you know who Julia Jacklin is? An artist from Australia.

We talked last week and she was like, “Oh, I’ve been listening to this Weyes Blood song nonstop.” She picked “Everyday.”

Wow! That’s funny, because I just watched Julia Jacklin. I think it was like, a Tiny Desk concert. I just watched a live thing she did on YouTube very randomly. So, it’s all in the ether.

Look at that—kismet. She was calling me from New Zealand and her album just came out and she was like, “I felt like I never want to write another song again. And then I was listening to ‘Everyday’ and I was like, wow I need to write a song.”

Yeah, because I was talking to one of my best friends who is an artist in Milwaukee and we were at his apartment and we were just listening to music and I was like, “Oh, this new Weyes Blood song ‘Everyday’ just came out.” And we were listening to the song and he said the same thing!

He was like, “I gotta write a song.” It was weird it was like two times in two days I listened to “Everyday” with a musician and they said that they need to write a song.

Aw man, that makes me happy. I guess in a lot of ways “Everyday” is like, an old school type of song writing that not a lot of people do nowadays. It’s kind of cool to realize like, yeah you can write a song that like has a different feel. You know, a lot things these days seem to be predominantly kind of shoegazey. Just to put some different textures in there, you’ve got some inspiration.

I think that that’s a big element of it is the different textures that you have in there—and on Andromeda too. You have bongos and like, steel guitar I think?

So, how did you think of having bongos and steel guitar on this song?

Well, I’m a huge fan of the LinnDrum, which is a drum machine that was made in the ‘70s and it’s got a really good pocket. It’s one of the only drum machines that has a strange human kind of quality to it.

It’s very swung and I think it was because they were trying to mimic Jim Keltner, who was an old school drummer that played with all The Beatles guys and all those crazy heads. And he had the craziest pocket ever. I think the LinnDrum was supposed to be some kind of copy of his pocket.

So, it’s very groovy and it’s really hard not to use the claps and the bongos and all these other fun ingredients. So, that’s really just like, a LinnDrum situation. I wasn’t like, “Oh shit, let’s get the bongos on here.” [Laughs]

Why did you make the album with all these sounds on it?

I think, because I’m a big fan of more like classic music and you know, it’s always been a dream of mine to have a lead guitar player come in and play something or have a string player. You know, and to have like some B3 organ and some synth.

I was a kid in the candy store for the first time—getting to make what I imagine to be a real symphonic, classic record.

I was just like, “Let’s go for it!” And it kind of matches the title and just the overall theme. Like, I don’t think that all my records are just going to getting progressively bigger and bigger. I might return to something a little more intimate, because I fluctuate as a person. But it just felt like it was just time to go buck and just really add all the harmonies that I imagined.

I would imagine that part of that is being in a place and having a budget where you can do that.

Yeah, totally [laughs]. That was a big part of it. I think I’ve made records in the past with no budget.

I was kind of working with my skills as a musician and just kind of over dubbing myself over and over again. Which, sounds cool, but it doesn’t have the same quality as when you get a real violin player and a real cellist and these other kinds of textures.

Listening to other things on Sub Pop, like the Father John Misty album just sounds so lush and full, because there’s a full orchestra. I feel like a lot of musicians just don’t have the capability or ability to do that.

So, was it like you’re with Sub Pop now and they’re like, “Hey, we can order offer you anything?” Or do they put you in a studio with a bunch of musicians?

No, they just give you a record advance to make the album.

Yeah, they give you a chunk of money and they’re like, “Go make it.” And then you have to budget it out and work it out and pay everybody.

So how did you know who you wanted to go to?

I just have a lot of friends that I really trust and I like working with. So, it was pretty easy to just use my friends. But I wanted to work with Jonathan Rado [of Foxygen], because we had done some projects together and always had a pretty good chemistry. And he was with comfortable with me co-producing—which not all producers are really comfortable with relinquishing power.

So, that was cool. And then the people that played on it are just friends. You know, the string people were new. I didn’t know them and I heard about them and got them. But for the most part yeah it’s just people I’ve met being a musician, people I’ve jammed with that I trust and people I really like.

I definitely try to express sorrow in a constructive way.

Can you tell me about a time in the studio where you were trying to make something work and it didn’t at first, but something came through that made you really happy that you have a sound?

Yeah, well there’s some songs on the record that basically I just did 100 percent by myself, because Rado didn’t really understand it. He’d be like, “Yeah, I don’t know about this song.” And I’d be like, “I know about this song,” and then I’d just kinda finish it on my own. Yeah, so that was cool, because those songs became some of the better songs on the album. Which, gives me a little hope.

So, this LinnDrum seems to be this kind of tool that you used for the album. How did this instrument come to you?

Yeah, it’s just on that one song, but Rado had one and I’ve heard about them and was always a big fan because there’s also a lot of great demos that people would us the LinnDrum for.

So, why were you obsessed with that song? The LinnDrum?

No, it’s just a really good song. It’s just got a super really good feel. It’s got the country, it’s got the pop, it’s got the crazy Bee Gees chord changes. And like, really incredible lyrics. It’s just one of those big ones. You know like, Barry Gibb wrote “Islands in the Stream,” which, is another really big song. And it was around that time that he also wrote “Midsummer Nights.”

But “Midsummer Nights” wasn’t covered by a really big artist and turned into a really big hit, but it’s got the same quality to it that is larger than life. Kinda a monument to love in the ‘80s or something.

I feel like, you’d have to hear it to really know, because it’s not just the LinnDrum, it’s not just Barry Gibb, it’s everything combined.

What is it about?

It’s about how this guy loves his midsummer nights like, naked with his girlfriend, just hanging out.

Also my favorite lyric is, “You gotta learn to be lonely to find what you’re living for.”

It is, it’s really true.

I do think that like there’s no point to experiencing nothing but pleasure all the time. That’s a very American way of looking at things and it’s actually quite unhealthy, because we need to experience the rough times to really appreciate the joyful times and vise versa.

Yeah, I hope so. I definitely try to express sorrow in a constructive way.

It seems to me, that says something about the album. Does the album have a thesis?

You know, I’ve been giving people a lot of information and saying things, but I do think I want to leave a little mystery in there and make it up for interpretation. But, the whole “Titanic Rising” concept is really about the irony and the absurdity of something as iconic as the tragedy of the Titanic, where our lack of dominion over nature was so apparent and so symbolically displayed.

And the people who get screwed over the most in this equation is the third class. To me as a child with the big film and the little children’s books about it—I mean, it was such a big moment for me, acknowledging man’s hubris and really believing in that as gospel. 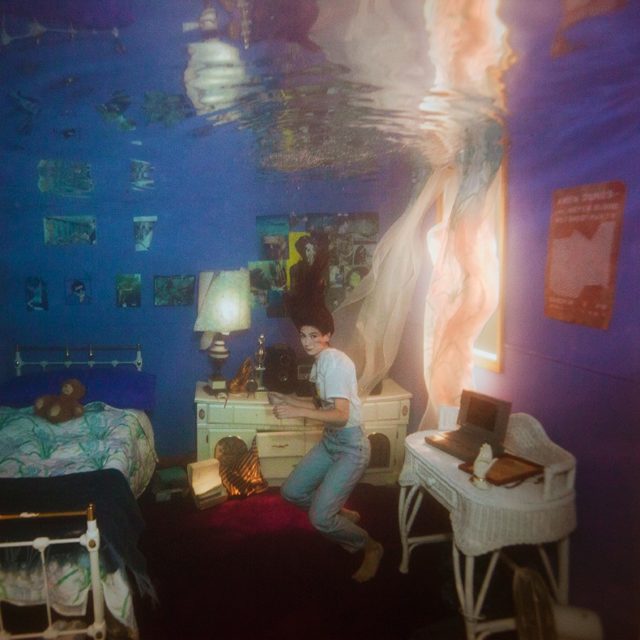 You know, considering the situation we’re in right now, it feels like man’s hubris has gotten so rampant. It feels like there’s no real acknowledgment of our lack of dominion over nature, even though it’s becoming so apparent and we have no idea what we’re doing.

Maybe we do and maybe people are incredibly evil and malicious, but I just find it hard to believe that all the climate change deniers are comfortable with the earth losing its oxygen and scorching up in flames or something. I really think that they are that dense and they really believe in conspiracies.

I think it’s a sad time where opposed to a ship crashing into an icebergs and sinking, we’re melting the icebergs and sinking civilization’s predominantly kind of, third-world small areas that don’t have the infrastructures to deal with those kinds of things.

Yeah yeah, so that’s kind of the thesis [laughs].

I also want the “Titanic Rising” to be like a symbolic event. Like, a phoenix rising out of the ashes. Like this massive uprising amongst people who are acknowledging that like, “We don’t have this figured out.”