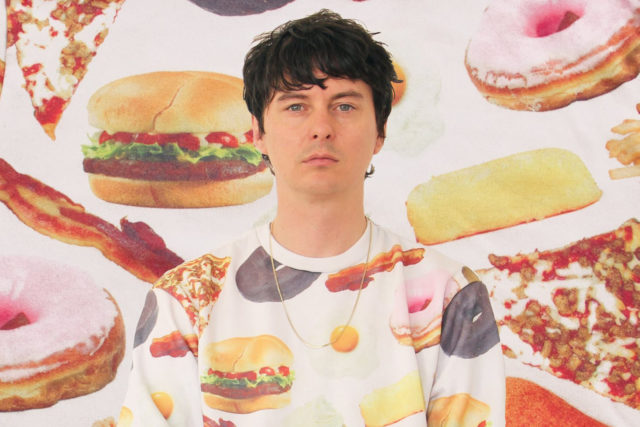 Panda Bear, courtesy of the artist

Where am I getting you at?

I am in Downtown New York at the moment. Where are you at?

You’ve got a good basketball team out there these days!

Oh! Don’t even get me started…Are you a basketball fan?

[Laughs] One of my first games I ever went to was Bucks, Wizards in Milwaukee actually. Back in the Jordan days.

Yeah it was kind of sad.

The question that I have that I would like to talk about is, what is the last song that you couldn’t stop listening to?

I talked to him over the phone while he was in New York City. After talking about a song that he can’t stop listening to, we chatted about the Bucks and music discovery. Read our conversation below.

That’s how you know when you really like an artist. Is when their late period stuff, where everyone else has jumped off and you’re like, you really see a lot of value in not the chart toppers, but the deep cuts of something later in the catalog.

Who’s your most reliable music source?

It’s any of the guys in the band. Take your pick. Or it’s my friend Chris Freeman, who runs a distribution company called Fusetron, which sort of specializes in more kind of fringe sort of stuff, but his taste and mine are very similar. So, I have a lot of luck with him and he kind of knows what I like. So that makes it easier.

Are you one to disseminate music when you find it?

No not really. Maybe, it’s a lack of self confidence or something like that, but I sort of tend to think… I don’t know, I guess I’m scared that… You know when something’s funny and you’re like you’ve got to see this it’s really funny and they don’t laugh. It’s so bad. You know, it’s so like defeating. So, I kind of keep it to myself for the most part. I mean, sometimes if I’m really sure that somebody’s going to like something, I’ll be like, “You should check it out.” But I can’t say there’s one person where I’m always going to, to suggest stuff.

Yeah, you are stepping out on the ledge.

The voice in my head is always like, “They’re just saying that to be nice.”

Yeah and same thing with sharing music, where you’re stepping on a ledge telling people to love it and you just know that they’re not going to like the song as much or like in the same way as you do. I’m always like, what am I looking for here? Because I’ve also had friends suggest music to me, for example, my buddy is obsessed with Jonathan Richman…

So do I! But I didn’t originally and then he was like, “You should listen to Jonathan Richman.” And I really hadn’t listened to him before. I just knew the name and the modern lovers. Then my friend goes through this whole second part of Jonathan Richman’s career, where he does this whole solo thing. Then, I got really into it and I got too into it for him. He was mad that I was so into it. So there’s a fine line.

That’s a weird response to that. Why would you introduce something to somebody and then be upset that they were more into it than you were?

That’s what I told him! I was like how can you be mad at me? I am loving the thing that you said I would love!

I don’t agree with it, but I understand when somebody has a band or some type of music they really like and it’s kind of their thing.

Even though they might want to share it with other people, when it stops feeling like their thing it almost feels, like a let down in some ways and I get that. Again, I don’t agree with it.

I’d rather just roll with the punches. Keep my head down. Carry on.

I understand when somebody feels sort of betrayed when a band that they like that is kind of not so well known becomes popular and then everybody likes it.

I understand that sort of impulse to want to be like, “Well I don’t like it anymore.”

Yes! I used to have a tendency to do that, of being possessive over bands.

It sort of like, defines who we are. So, when it’s defining a thousand other people too that we feel we have nothing in common with, then there’s something just incongruous about that.

I feel like part of me changed after the internet came. Suddenly this band nobody knew that I had to special import their CD to our record store, now you look and you can see how many other have seen them on Spotify. I mean you see their numbers and that’s kind of changed the way—I think in a good way—that I am not as possessive of bands.

I mean I think it like changed the game entirely. Like, I think the thing that we’re talking about as far as people using a band as kind of like, a totem that defines who they are. I think you see that a lot less than you used to.

Right. How do you feel about that as a musician?

I guess, I see a positive and a negative to it. On one hand, I’m sort of sad to see that like, really kind of deep emotional attachment to something go. On the other hand, I’m kind of happy that people aren’t so possessive about this stuff. So, I guess I’m of two minds.

At the end of the day it’s not really worse lamenting. Things are you know, constantly in flux. Even if it’s this way now, in 15 years I’m sure it will be something entirely different. I’d rather just roll with the punches. Keep my head down. Carry on.

The Wizards will get there. Thank you. You know, if you want to be a bandwagon fan…I’ve been telling everybody we have never had bandwagon fans and so we’re just inviting anybody that wants to come in.

I’m just saying enjoy it [laughs]. Please, for me.