If any month could be labeled “most emo,” it’s January. It’s filled with so many chances to feel overwhelmed by resolutions and goals; so much time to feel underwhelmed by a ghost-town calendar, gray skies and cold temps; and one too many days until spring.

For John Chiaverina (RUSTBELT and formerly Juiceboxxx), January is extra over/underwhelming. So he decided to release those vibes by covering one of the most iconic emo bands of all time: Milwaukee’s The Promise Ring.

The Promise Ring’s second album, Nothing Feels Good, came out in October of 1997, just in time for a new semester with its introspective, emotional punk, and sappy and cerebral amped-up pop. It became one of the band’s best-known releases, produced by J. Robbins of Jawbox and put out on Jade Tree Records.

Chiaverina views and relates to the album’s title track as “an American Confusion Anthem,” something he’s adept at creating under his own musical projects. “Nothing Feels Good” is a languisher, the lyrics equal parts uneasy confusion and numb apathy:

Talking about his connection to the band, Chiaverina said, “Growing up in the Milwaukee area, The Promise Ring meant a lot to me. I'll never forget the time I saw them on a triple bill with Alkaline Trio and The Dismemberment Plan. Now I'm siked to be making music with Dan Didier, the band's drummer. I wanted to cover one of my favorite songs in a way that was honest and exciting to me, which meant going crazy with autotune and dropping a wild breakbeat.”

RUSTBELT-style “Nothing Feels Good” is indeed “crazy with autotune” and propelled by that wild breakbeat, underlining the simple skeleton of the original song with its cut-to-the-chase, humdrum feel. The accompanying video shows Chiaverina drifting through an outdoor school track and hanging out in the bleachers in the dark, like a shadow of his younger self, realizing that things don’t get any clearer once one reaches adulthood. 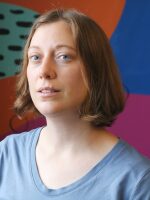