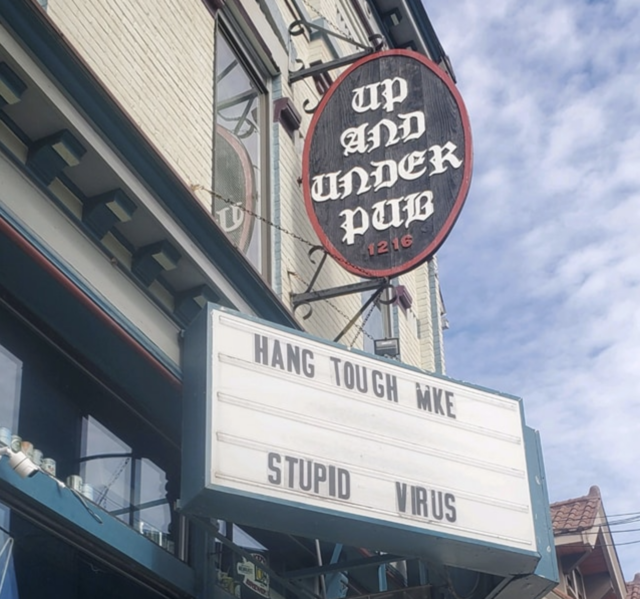 Brady Street is losing an institution. This week Up & Under Pub announced that after more than four decades it will be closing for good on Sunday, Sept. 27. “Another one bites the dust!” the bar posted on Facebook. “So come on down for one last drink.”

Owner Tim “Brody” Brodersen told the Journal Sentinel the bar is closing following a dispute with its landlord, and that he plans to reopen somewhere else when circumstances allow. But he’ll be leaving a lot of history behind at 1216 E. Brady St., where for decades Up & Under was one of the East Side’s destination music venues.

Opened in 1977, the bar was in many ways a bridge to Brady Street’s countercultural past, the decades when Brady was a hangout for hippies, burnouts and motorcyclists. In its early years, it was the city’s premier blues bar, recalls blues musician Alex Wilson, who’s musician father Tom took him to his first shows there in the early ’80s.

“I really grew up there, and I cut my teeth there,” Alex Wilson recalls. “I learned a lot from a young age from the guys down there. It was a hangout for all the city’s big blues guys, like Stokes, Lee Gates and Milwaukee Slim, who I used to call the three wise men because they came up from Mississippi in the ’60s. There was a lot going on in the city at the time. Sonny Boy Williams, Mighty Joe Young, Otis Rush, they all came through the city. Otis Rush and Luther Allison played the Up & Under many times.”

Demand for live blues was already cooling off when Broderson bought the venue in 2006, but even as he gave the bar a makeover that appealed to a more general sports and college crowd, Up & Under remained a hub for live music, celebrated for its long-running open mic and eclectic bookings.

“The Up was a unique venue,” says musician Misha Siegfried, who over the decades has performed more shows at the Up & Under than he can count. “I was fortunate enough to be both in the Sunday night Blues Jam house band under Mike Kostal’s ownership of the club as well as the bandleader for the Open Jam house band under Brody’s management. In both cases, being a part of the community at that club was an amazing experience and one I am not likely to forget anytime in the near future. I was fortunate to meet and play with some amazing talent in those years.

“I was fortunate enough to be able to use the Up as a laboratory for what ended becoming my first band as a bandleader,” Siegfried continued. “This was a rare and wonderful experience to be able to have a club owner who was so hands off when it came to the music we were playing.”

Other performers mirrored that sentiment.

“It was a place we could try out new things when we just were starting out,” the band NeoCaveman told us.

Matt Williams of the band Steez similarly credits the venue for giving his group an opportunity when they were just starting out. “This is where Steez got their start in Milwaukee,” he says, “which ultimately led to multiple performances on the Harley-Davidson stage at Summerfest after battling thru some seriously sweaty and smoky nights at the Up & Under some 10-plus years ago.”

Up & Under will host one last show before it closes for good the following day. The band American Monroe will play on Saturday, Sept. 26. Music starts at 10 p.m. and masks are required.