Listen to a chat with REYNA, the new project from Vic & Gab

Listen to a chat with REYNA, the new project from Vic & Gab 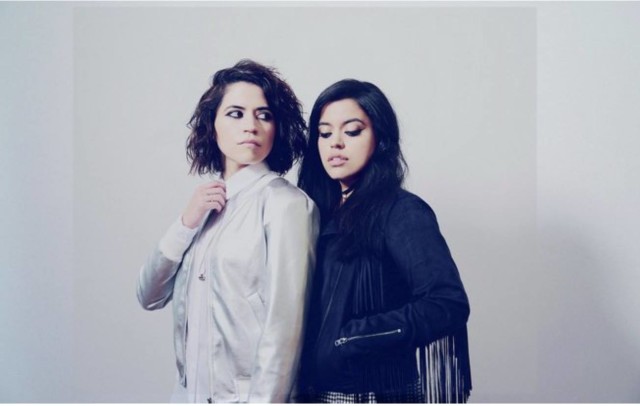 aside from the name, what's new? the sisters explain

Local musical sisters Victoriah and Gariela Banuelos have shed their “Vic & Gab” moniker in favor of a fresh new sound and name.

Now “REYNA,” the Banuelos’ stopped by 88Nine Radio Milwaukee today to talk about the change, what’s new, and when we’ll hear new music from the (now) trio.

Listen to the player above for the full interview or read excerpts below.

Last time we talked, you were saying farewell to the name “Vic and Gab.” Tell us about the name REYNA and what it means to you.

Vic: When we went to L.A. the first time to write the songs, for this new EP. We came across a lot of people who were super talented and just amazing. Trying to go for the same dream that we have. So we wrote this song, playing off that feeling. It’s about chasing that same crown, chasing that same dream.

We started playing with words that related to royalty, and “crown” and we came across a word, “reyna” which means “queen” in Spanish and we said, “that’s perfect. We love it.”

How is REYNA different than Vic & Gab?

Gab: I think it’s different because I feel like everything we’re doing now is on purpose. I think Vic & Gab were two kids trying to make their dream come true, doing what they love, which is playing music.

A lot of what did was not thought out, we’d just get in the studio and we were so excited about everything we were doing. Not that we aren’t now, but now we know what we’re doing.

We’re much better songwriters, we’re better at our instruments, I feel we sing much better. And going back the word “reyna,” it’s like we became women, instead of just being kids.

I think that’s the main difference. The music sounds more grown-up. I think it needed a different name; it’s a different chapter in our lives.

It was completely, totally different. I think it was good for us. It totally got us out of our comfort zone ...

I feel like Vic & Gab was more guitar-heavy, but with your new single “Spill Your Colors,” it’s got a lot of synth elements. Are you playing those?

When we got into the studio this time, we had whatever we wanted. [laughs] And we had help, too. We learned how to do those things and I think that’s why it’s heavier in there. I can’t go on stage without my bass, I would feel totally naked and weird.

This studio you’re talking about is in L.A., was it a different experience?

Gab: Yes. We recorded in L.A. and New York City. It was completely, totally different. I think it was good for us. It totally got us out of our comfort zone and we got to go in there and just write good, interesting music.

In the past were you just recording on your own in Milwaukee?

Vic: In the past we wrote the songs kind of on the road. We were playing a lot of shows and we would come up with songs and play them at live shows and then decide to record them. We actually recorded both albums in San Diego at a friend’s house.

It was like, “yeah, let’s go out to San Diego, this guy has a computer.” All the stuff that we think we need. So that’s where we recorded “Love of Mine” and “Bridges” and “Guns.”

But like Gab said, it was a totally different experience for us, writing with people. We’ve only written songs with ourselves up to that point, so it really brought something out of us.

Is it good to have a third party so anytime you had to make decisions that you were fighting over?

Gab: I think it’s funny though, as soon as there was a third person it was like Vic and I against them. Not like them against us.

When it’s just me and her in the studio, we’re fighting like, “no! It should be this!” “No, I hate that part, do it this way” but as soon as there was someone else in the studio, we were on the same page and that person had to come on board with us. So, it was actually good for us.

You didn’t road test these songs first, these were written in the studio. Was that a scary feeling?

Vic & Gab sounds like two of you, sisters. With REYNA, you have a “band” with a third member…

Vic: Yes, his name is Pat and he’s a drummer from North Carolina, but he now lives in L.A. He’s really cool. We practiced with him out in L.A. two months ago and it was great, we clicked.

We met him through our manager. We played “Spill Your Colors,” what, 30 times?

How do these songs come alive with all the synth elements?

Gab: We have to figure out… We don’t want to completely stop playing our guitars. So, there might be a chance of there being a synth player or sometimes we’ll play synth. We’re still figuring that out.

I think we’re still going for us being more guitar-heavy live, because that’s just us, that’s what we do and that’s what we’re comfortable with.

Are you doing any music festivals this summer or any local shows?

Vic: That’s the thing that we’ve been talking about a lot. Trying to get the band together. We already have Pat, our drummer, but we haven’t really worked out any song other than “Spill Your Colors.”

Gab: We’re putting the EP together, we have six songs but we’re either going to have four or five on the EP. Once we have those set, then we’re going to get in a practice space and just bang it out.

Vic: Yeah. With “Spill Your Colors” we digested everything about and we made it so we’re comfortable playing it live. That’s what we want to do with the other songs before we hit the road and then we’re trying to figure it out as we go.

Gab: But we can’t wait. We can’t wait to play specifically here in Milwaukee, it’s going to be so much fun to get back on stage.

When can we expect any new music?

Gab: The end of this month, on the 26th, February.

What’s next for REYNA?

We’re going to release a new song, and then we’re planning on releasing the whole EP in March. Along with that we’re going to do a couple of shows, so that’s what’s next for us. We have a lot coming up.

Are you relieved to finally talk about it? Not having a secret new name?

Gab: Oh my gosh, yes. I felt like such a jerk when people were like, “well what are you doing?” I want to tell you, but I can’t!