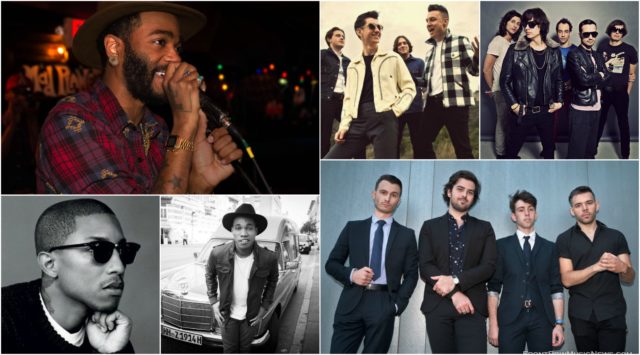 Mic Kellogg is one of the biggest and brightest stars in Milwaukee hip hop. Originally hailing from Madison, Kellogg is creating some of the best music in this new wave of hip hop influenced by artists like Chance the Rapper. Mic Kellogg does a great job of creating quality hip hop production and lyrics, with songs that never take themselves too seriously. With great lines like, “Last night I wore tennies to the club,” and “Dirty clothes in my closet, iPhone in my pocket

I just let it ring,” he paints fun, beautiful pictures of his life that could not be more relatable for twenty-something’s. Add in crisp, atmospheric production with soulful background melodies, and you have perfect summer driving music.

Milwaukee rock band The Living Statues have somehow managed to perfectly capture the sound and feeling of the garage rock era in 2000’s England, led by bands like The Strokes, Arctic Monkeys and Kaiser Chiefs. Instrumentally, The Living Statues race through their tracks at breakneck speeds with blasting drums, razor sharp guitars and rolling bass lines. Vocally and lyrically, it is aggressive, tongue in cheek and often romantically themed, without ever feeling gimmicky or full of cliches. Much like the early catalog of Arctic Monkeys, the band captures the ups and downs of your youth in this angsty, almost impatient way. The Living Statues’ catalog is full of energetic, enjoyable rock songs that just make you want to get up and dance.

For many artists, it is hard to create music in a modern, mainstream style while still having a unique voice and style. Like West Coast rapper ScHoolboy Q and East Coast rapper Joey Bada$$, Milwaukee rapper Von Alexander manages to do just that. Alexander flourished under a wide range of modern production styles, including mainstream, trap-influenced beats, more organic instrumentals and even more experimental electronic beats. He is equally versatile when it comes to his vocal style, using countless melodic and non-melodic flows to perfectly complement any instrumentals he is on. Also like ScHoolboy Q and Joey Bada$$, Alexander does a great job of capturing the everyday struggles that many go through in his community through his lyrics. His versatility, combined with his socially conscious lyrics, make him one of the best in Milwaukee.

Few bands can capture the feelings of nostalgia from a bygone era quite like Platinum Boys. The band combines numerous classic rock elements to create a sound that feels reminiscent of a ton of different bands, yet at the same time is distinct to them. They have the aggression and speed of punk rock, the fun-loving attitude of glam rock, the guitar sound of hard rock and the melodies of power pop. Additionally, their lo-fi, basement-made sound, while hard to achieve, adds such an endearing quality to their music that almost feels like they’re performing live just for you. There aren’t many things in this world more enjoyable than fun rock music with catchy guitar riffs, and that is exactly what Platinum Boys bring to the table.

Listen  to Klassik if you like Pharrell Williams and Anderson .Paak

For nearly a decade, Milwaukee artist Klassik has been making a name for himself on a local and national scale as both a rapper and a singer. Both as a performer and an artist, Klassik truly is a jack of all trades. Between doing all of his own production, rarely having vocal features and operating with a one man show setup at live performances, every aspect of Klassik’s music goes through nobody but the man himself. Instrumentally, while most of his funk and jazz based, he may be the most experimental hip hop producer in Milwaukee, playing around with different synths, drum patterns and atypical instruments that give him a signature sound. Vocally, he manages to seamlessly transition between singing and rapping, while having immense talent in both. In the world of experimental/jazz-based hip hop, Klassik is one of hardest working and most talented in the game.

You may like these 5 Milwaukee artists, based on artists you already know and love

When it comes to getting involved in local music, people often face the problem of not knowing where to start. Hopefully, thanks to this new series of articles, that problem will be long gone. Every two weeks, we at 88Nine will be bringing you Milwaukee music recommendations, based on nationally renowned artists you already know and love. Here are our first five recommendations.