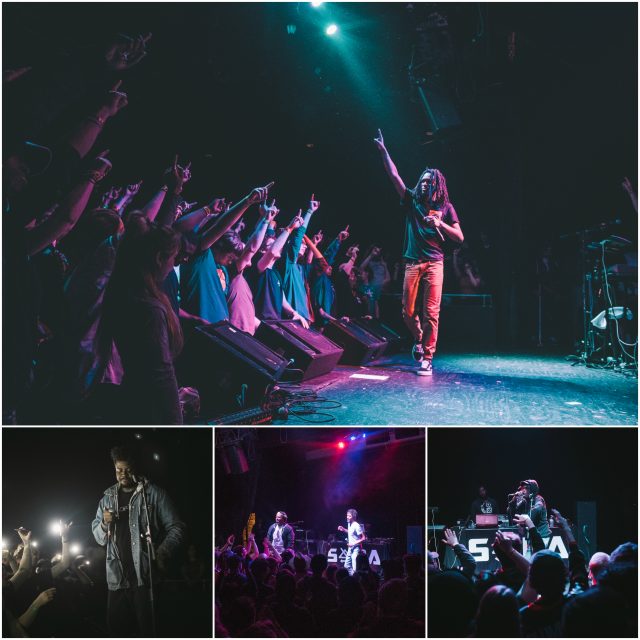 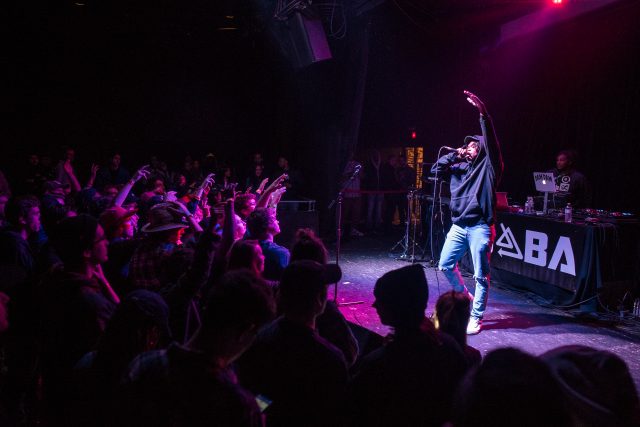 While the Madison rapper certainly proved his technical ability on the stage, Trapo’s youth and inexperience were still apparent during his performance. He rapped the show without a backing vocal track, an uncommon accomplishment in modern hip hop, and even broke out some impressive a capella rapping during the set, which were pleasant surprises given the complexities in his songs.

The 18 year old had the comfortable stage presence of a more seasoned veteran, but his energy level seemed to be lacking, which reflected onto the crowd. This audience, lackluster before his set began, only marginally raised their excitement during the performance. While Trapo’s studio recordings are highly recommended, and he shows great potential, his energy needs work. 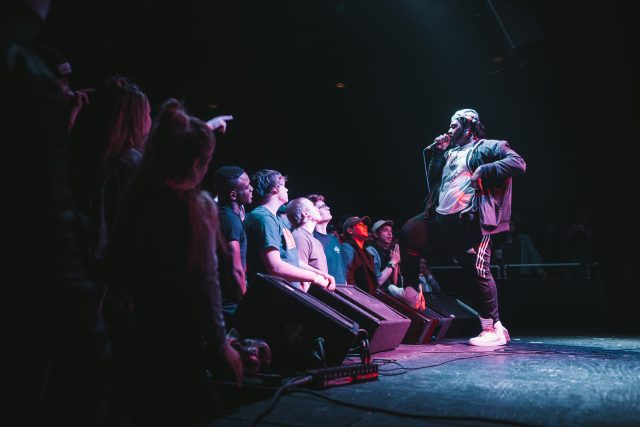 As an artist with a minimal catalog thus far, Chicago’s own MFn Melo began his performance as mostly-unknown to the audience. However, his magnetic personality and effortless vocal ability finally raised the energy level in the crowd. Melo, a member of Saba’s collective PIVOT gang, had everyone eating out of his hand with his humorous demeanor and clear excitement to be on stage.

While some rappers try to impress by fitting as many words as possible in one bar, Melo approached his songs with unique flows, clever punchlines and a commanding vocal presence, all of which have become lost arts in hip hop. He did exactly what was expected of him as an opener, and he has a lot of potential as an artist moving forward. 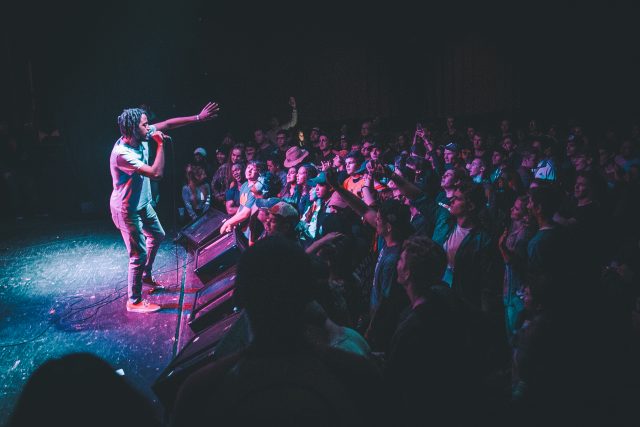 Joseph Chilliams, collaborator with Saba on his hit song “Westside Bound 3,” was absolutely the weirdest, funniest and most unique artist of the night. Chilliams, also a member of PIVOT gang, immediately charmed the whole room with his hilarious punchlines, outlandish dance moves and conversational nature with the crowd.

Also having a small catalog, Chilliams performed some of his few songs that have been released, such as “Obamacare,” as well as some unreleased music, including an ode to Fergie that included lines from her most popular tracks. If his personality is any indication, Joseph Chilliams has a bright future ahead of him. 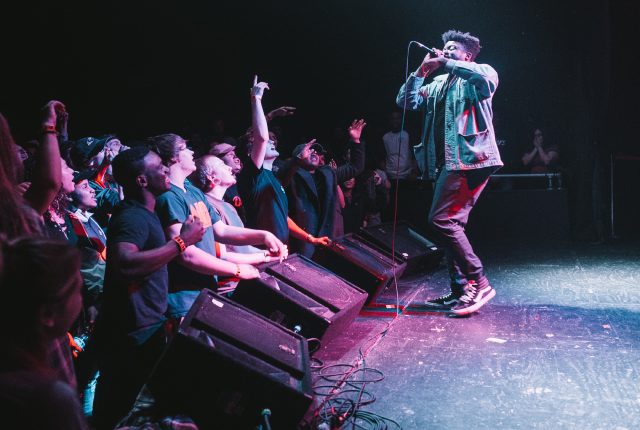 Coming out to what was already a hyped up crowd, Sylvan LaCue brought the energy up to the highest level it had been all night, immediately proving his skills as a performer. The Miami rapper definitely possessed the most impressive technical ability, ending nearly every track with an incredible freeform a capella verse, each one blowing the last out of the water.

His insane vocal ability, smooth instrumentals and optimistic lyrical themes all made him endearing to the audience. His upbeat personality and clear humility while on stage were breaths of fresh air compared to the normal attitude in hip hop. His performance was incredible all-around, and he proved that he has a headlining tour in his near future. 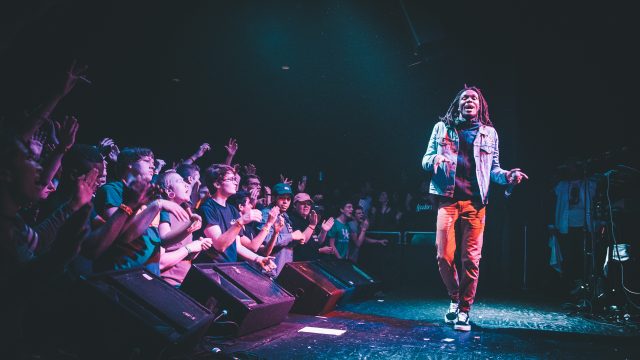 Despite the other great performances throughout the night, it was immediately clear who everyone came to see when Saba hit the stage. The energy within the crowd had been building all night, and completely exploded at the start of the set. After the first few songs, the audience settled down, and things quickly got emotional for the young Chicago rapper.

This was the last show of the Bucket List Tour, his first headlining tour. Because he did not schedule a tour stop in his hometown in Chicago, this Milwaukee show ended up being somewhat of a homecoming show for him, with multiple friends and family members of his in attendance. Most importantly, just weeks before the tour, Saba’s cousin and founding member of PIVOT gang John Walt was murdered. Saba used all of these personal and emotional elements to make something that was incredibly special to watch. 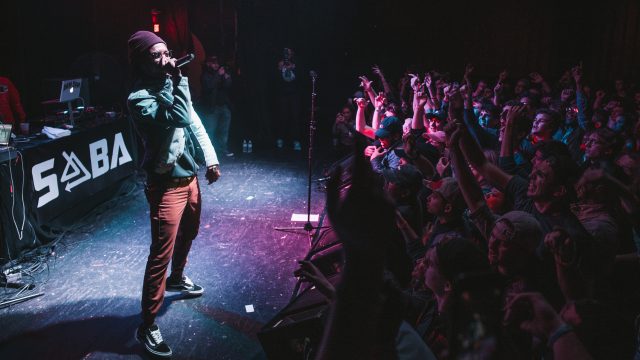 Throughout the set, the rapper performed tracks from his first mixtape ‘Comfort Zone,’ his debut album ‘Bucket List Project,’ and even some scattered features. He had all of the best qualities of his predecessors that night: he captivated fans with his engaging personality, powerful stage presence and insane technical ability.

It is rare to go to a show such as this and feel as though you’re watching a superstar in the making; this is exactly how it felt watching Saba. In this growing scene of Chicago hip hop, Saba is surely one of the standouts, and this young rapper has nowhere to go but up.

The Chicago rapper, along with his fellow collaborators, impress the audience on the last show of the Bucket List tour

Considering that it is mostly known as a venue for electronic music, The Miramar Theater has been surprisingly successful at booking hip hop shows recently, particularly from the Chicago area. Between popular rappers Noname in February and Taylor Bennett in March, the East Side venue is gaining a reputation for having popular hip hop acts. Last Tuesday was no exception, with Chance the Rapper collaborator Saba delivering a performance in the theater. Surprisingly, the crowd was pretty low in energy to begin the show, including during the first performance.