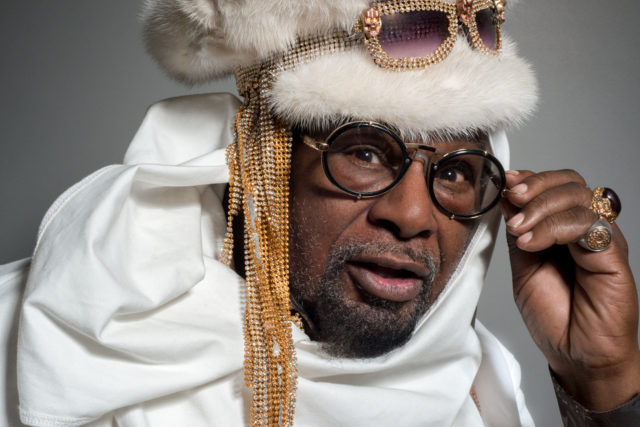 Justin Barney: George, what is one song that you can’t stop listening to?

George Clinton: One song I can’t stop listening to? I guess it’s going to be, it’s a new album by Flying Lotus.

George Clinton: And Anderson .Paak is on there.

Justin Barney: Yes, the new song from Anderson .Paak and Flying Lotus. How did you hear that album or that song?

George Clinton: I’m on one of the songs on his album and it’s “Burning Down the House.”

Justin Barney: We haven’t heard that out because it’s not out. What is Flying Lotus like? What’s it like working with him?

George Clinton: Oh cool, it’s lit. I mean, it’s like we are all Funkadelic when we first met Bootsy and Bernie and all of the guys. They have a crew like that, a bunch of musicians that’s having a lot of fun. You know, the Kendrick Lamar crew and all of them are from that Los Angeles music scene. They really hyped right now, that’s why I like working with them. They all are doing a lot of good music.

Justin Barney: Yeah. So then “More” the song by Flying Lotus and Anderson .Paak what do you like about that song? What do you think they are doing?

George Clinton: The whole thing is like slick, immersing the hip-hop and the jazz. You know, kind of like what we did with the funk. You know “Make My Funk The P.Funk” and “Chocolate City.” We kind of mixed jazz with funky music and came up with P-Funk. They are kind of doing the same thing with hip-hop. So that’s the new sound they are coming up with.

One song that I can’t stop listening to is “Forest Lawn” by Better Oblivion Community Center. I’ve been listening to this Better Oblivion album just non-stop. I’m not sure why I’m so surprised that I love it so much. It is Conor Oberst, who I love, and Phoebe Bridgers, who I’m also a fan of. But I think they really kind of build on each other’s strengths and they are great at each other’s parts.

Anyway, I’ve been listening to this album non-stop and there’s this song toward the end called “Forest Lawn,” and “Forest Lawn” starts with a line, “You used to sing with a straight face “Que Sera, Sera” and I knew that there is a reference to “Que Sera, Sera” but in my head I was I know that song but I’m not totally sure, I couldn’t tell you off the top of my head who sings it. Then I was listening to Fresh Air with Terry Gross and Terry was interviewing Howard Stern. It was an amazing interview. An interviewer interviewing an interviewer! That is my heart!

It was one of those musical moments where it’s just all the stars are aligning. I’ve been obsessed with this song that has a reference to this song, to this musician who just passed away, and then it just came together through sideways through Terry Gross and through Fresh Air. Que, sera, sera.

Justin Barney: Ali, what’s the last song that’s really got stuck in your head, was really drilled in there?

Brother Ali: I don’t listen to a whole lot of newer music but I really like Solange has a new album. There’s a song in there called “Binz” that I really like.

Justin Barney: So many people connect with Solange. Why do you think that is?

Brother Ali: To me, I think her music is really personal and it shows really genuine. I don’t think she needs to compare to her sister although that’s a really obvious comparison to make but Beyonce’s music is so produced and intentional and she makes amazing pop music but Solange’s music has more of an underground feel.

Brother Ali:  I really appreciate it.

Justin Barney: What was the song that you talked about liking?

Justin Barney: What do you like about that one?

Justin Barney: On Thursdays I always ask someone from staff what they are listening to. Today I have Kyle, Kyle what is your title at 88Nine?

Kyle Heller: That means I manage most things that happen inside the building here at 88Nine and answer everybody’s request for help.

Kyle Heller: “No Geography” by the Chemical Brothers

Justin Barney: And why do you like this song?

Kyle Heller: Well I grew up listening to the Chemical Brothers they were sort of my introduction to electronic music. Their new album, which is called “No Geography,” has this track on it and I just keep listening to it. It’s soothing. I love the vocal sample, and it’s a great song.

Justin Barney: What do you like about electronic music?

Kyle Heller: Mostly just, I mean I like all sorts of different types of electronic music but a good crunchy synth is a good thing. A good beat, the Chemical Brothers always have a good beat so I’ve always listened to them but their new album just kind of quintessential them so it’s a nice flashback for me.

This is the final song this week and it is my pick. One song that I can’t stop listening to is “Nervous” by Jonah Yano & BADBADNOTGOOD. Are you stressed? There’s been a lot of stuff going on. There is a lot of stuff going on all the time. There is a lot to be stressed about. This song is not about stressing out. This song is about relaxing and if you need to relax or just take a second put this on as you get home or as you’re driving and just let it go. This is a mood setter and it’s a relaxer.