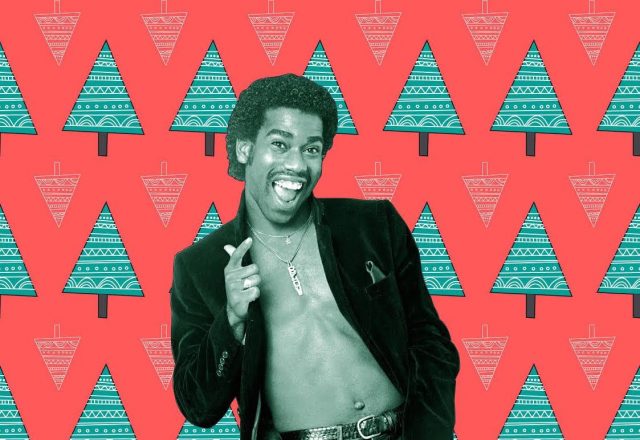 I think most people like holiday music. I mean, they must if so many radio stations are playing Christmas music around the clock. We love holiday music too, and don’t get me wrong, we will blast Mariah whenever “All I Want For Christmas Is You” comes on, BUT we also love the weird holiday songs. The ones that don’t make a whole lot of sense, are kind of off-beat, or holiday songs that are crushingly sad. We’ve put together a couple of our favorites here. Happy Holidays!

Makenzie: One of my favorite holiday songs is Christmas TV by the band Slow Club.

Makenzie: I love Slow Club too. I didn’t know of the band before I had heard this song. This song was actually given to me by my younger brother, Cole. I have a very distinct style of music that I like, and Cole actually heard this song, and brought it to me like “I think you’d really, really like this Christmas song,” and immediately I was like, “hmm, I don’t like Christmas music, I never really have liked holiday music.” I loved this song though, I has the traditional male female duet, the harmonies, the soft guitar, the bittersweet lyrics; I love it. It’s really, really sweet.

Justin: It’s funny, because Cole sent this to you, and it’s about being apart and wanting to be together for Christmas, and you’re going to Orlando to be with him.

Makenzie: I am going to Orlando. My brother lives in Orlando, for people that are confused. This one goes out to my brother Cole. This is Christmas TV by Slow Club.

Justin: Alright, let’s do it.

Kurtis Blow’s “Christmas Rappin’” is this weird novelty song that is kind of responsible for launching hip-hop as a genre. Until it was released in 1979, hip/hop was a sub-culture limited to just a couple of boroughs in New York City. The artists and producers making hip-hop knew that they needed major label support if they wanted to make any impact outside of New York City. (This was the late 70’s; there was no internet. You couldn’t make it without major label support.)

So, Kurtis Blow’s producers knew if they released a Christmas song, there would be less of a barrier to entry for major label support. So they cut “Christmas Rappin’” and sent it to tons of labels.

After many many rejections, Mercury Records decided to take a chance on hip-hop. They signed Blow to a two song deal, with the condition that Blow would only get an album deal if both songs were hits. The fate of hip-hop rested on this Christmas Song.

And it was a huge success. “Christmas Rappin’” was a hit. A hit for Kurtis Blow, a hit for Mercury Records, and a hit for hip-hop. And the second single, “The Breaks” became the first certified gold hip-hop record — ever. Kurtis Blow became the first hip-hop artist to get an album deal from a major label. And hip-hop broke out of New York and across the country. And that’s how a Christmas song saved hip-hop.

For all the Christmas songs written over all the years, I had to look back just one year to find my favorite Christmas song of all time. LCD Soundsystem officially stopped releasing music in 2010 after their final album, “This is Happening” BUT they broke the silence one time, on December 24th, 2015 they released “Christmas Will Break Your Heart.”

The thing I like about this song is that it’s crushingly sad. I think it’s easy to feel sad at Christmastime because  the pressure for it to be perfectly happy is unbearably high, and any little crack in the perfect image of a postcard Christmas can make you feel like you are on the outside of the fairy tale, looking in. And even if everything is fine and dandy, it still feels good to hear James Murphy’s voice ramp up and up and explode with heartbreaking emotion.

On paper hip-hop and Christmas should not add up. If hip-hop is about keeping it real, then rapping about a portly bearded man shimmying down chimneys and traveling around the world in one night is kind of off the mark. And I think that’s why I love it so much. There is this absurdist element to Christmas raps, a lowering of the guard in the name of Christmas spirit that I find endearing.

This song “Christmas in Hollis” was released by Run-DMC in 1987, at the peak of the band’s popularity. And at the peak of hip-hop’s “golden age,” when keeping it real was the genre’s manta. And “Christmas in Hollis” is real. DMC is saying, “I ain’t no sucka MC, but I am gonna get together with my family on Christmas eve, eat some of my mom’s home cooking, and bust some Christmas carols.” That’s keeping it real on Christmas.

5. Tom Waits – ‘Christmas Card From A Hooker In Minneapolis’

I feel Tom Waits is a polarizing character.  Love him or hate him. I love him. Tom Waits is my favorite artist of all time. I say that with confidence. The man is a storyteller. And I respect that.

First off, this song is written from the point of view of a woman. Tom is the female character in this song. Who does that? No one? Tom Waits does that. And that’s why I love him.

This song is a beautiful and tragic story. It’s in the form of a Christmas card just catching up. It’s written to Charlie, filling him in on lost time. It start with good news. She stopped taking dope and quit drinking whiskey, she’s pregnant and her old man takes her out dancing every Saturday night, and he loves her. They’re getting engaged.

And it reaches this peak. But then, things start going downhill. Someone stole her record player, she had to go back to Omaha and live with her folks. Things get even worse. She wishes she had all the money they used to spend on dope. Then she finally comes out with it. She breaks down: “Charlie, if you wanna know the truth of it, I don’t have a husband, he don’t play the trombone.”

She’s in prison, she needs to borrow money. It was all a lie. And she’s sending this letter to him, some old client, cause she’s got no one else. But she does have good news — she’ll be eligible for parole come Valentines day.