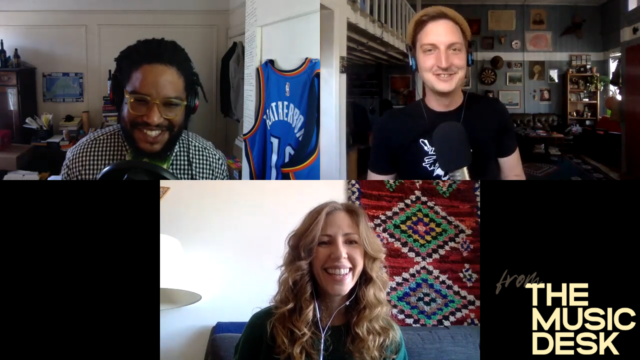 Lake Street Dive are music nerds. My favorite part of this interview is when I ask Akie what he is listening to, and he kind of tiredly admits that he’s been listing to a compendium of avant-garde Romanian composer György Legeti’s cello concertos.

“It’s too weird!” he says. “No one wants to hear about this.” Before diving in. “He’s a 20th century composer. Post-romantic. Sort of in the 12 tone atonal area. But a little more interested in post-tonality, if that makes sense.” Of the piece itself: “It has microtonal ocarina’s in it, which is just stunning.” And if that weren’t nerdy and great enough, Lake Street Dive lead singer Rachael Price comes in for a quick sidebar, “Was he one of the first composers to use electronics? Or am I thinking of someone else?” Akie replies, “I think so, but I think you’re thinking of Stockhausen.” “Yeah. that’s it.” They agree.

That kind of microscopic music nerdery sums up that band well, and there is plenty more if it here. Akie goes into his expansive alien love story that he has been writing for years. The band recounts giving Akie plastic rings in a formal gesture to welcome him into the band, and we get into the sound of their new album, “Obviously.”