The Mountain Goats share a joyous performance for Radio Milwaukee

The Mountain Goats share a joyous performance for Radio Milwaukee 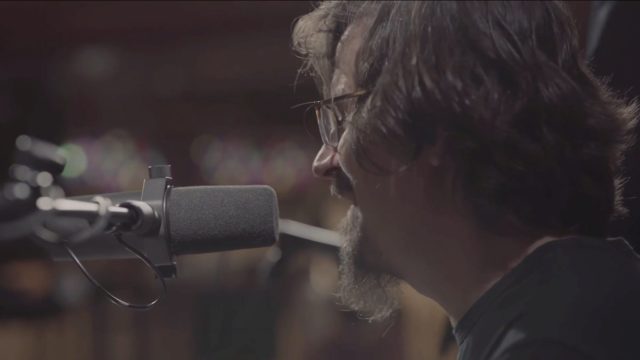 “I promise you, no one is enjoying this more than me,” John Darnielle, lead singer of The Mountain Goats says at one point during this performance. Even before we started recording, John was talking about how much he misses touring with his buddies in the band. There was  sincerity in his heart. He mentioned the straight job that he had before and how that made him appreciate how lucky he is to be a touring musician. This launched into a dissection of the worst jobs that him and Matt Douglass have had over the years.

Darnielle is a talker. He’s got a sense for story and little reflections of big ideas in any given situation. It’s what makes his songwriting incredible. I asked him about the song we are playing, “Get Famous” from their new album, “Getting Into Knives,” and he revealed its origin. He was running, something that is new to him but that he loves, and listening to the obscure Japanese metal band Baskerville, and after being impressed he mused out loud, “You should be famous.” Then he thought about what he’d just said: “You should be famous.” How fame is seen as desirable, but fame isn’t a prescription to happiness — in fact, he turned it completely around and saw it as a curse. “You Should be Famous,” the song by The Mountain Goats, is a hex, spat at an enemy.

Darnielle is full of these little bits of observation and turns of phrase. He’s open about them too. You’ll hear plenty more in the interview. The whole thing was a pleasure for everyone. Immediately after the call, not more than 10 minutes after I hung up on the Zoom call, I bought two Mountain Goats LPs off Bandcamp. He may have said that he enjoyed this performance the most, but I have my doubts. It was a joy for us all.