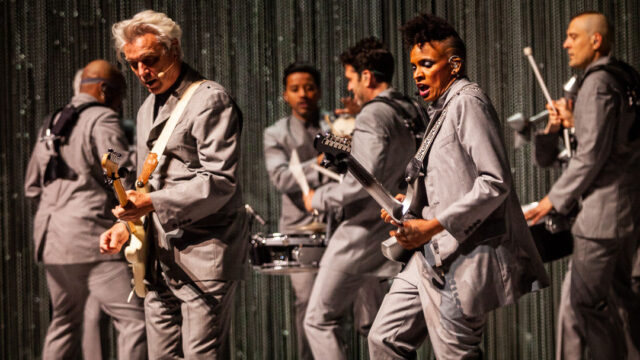 I’m Justin Barney and I’m filling in for Jordan today as Piet and I talk about three things we love: David Byrne of Talking Heads, Spike Lee and also Milwaukee. What do they have in common? They’re all part of the film adaptation of David Byrne’s stage show “American Utopia.”

It’s really a one of a kind show. The band performs without any sort of electrical cords, almost like a hybrid of a dance troupe and marching band. And it translates really well to the screen. Piet says it’s one of the most exciting concert films since “Stop Making Sense.”

The Milwaukee connection is Angie Swan, who is the guitarist and vocalist with the group. The Milwaukee native often steals the show, especially during a cover of Janelle Monae’s “Hell You Talmbout.”

We talk about Angie’s friendship with Byrne and what a big fan of Milwaukee Byrne is — when I interviewed him years ago, he was schooling me with his knowledge of the city.

The film is showing this Saturday on HBO. Stream our episode below.